Wonderful walk to #cocklawburnbeach , offering #solace on a difficult day … Although we don’t have dogs, it is always a joy to see #dogs (and their owners !) enjoying these beautiful #northumbrianbeaches #doglovers #cocklawburn #northumberland
Goodbye #goldenfield! This morning - at 5 am - the farmer started #ploughing this enormous field (3 fields until a few years ago when he took down the fences separating them). That tiny tractor! such a large field! I cannot imagine the mindset required to #plough from dawn to dusk to accomplish this task. By teatime I expect it to be all dark brown loam - #gullheaven #turnoftheseasons #autumn #northnorthumberland
Spinning some of the #icelandiclopiyarn I was given a couple of years ago. There’s a tiny little #bee dead in the soft folds of the yarn - what a nice soft place to end your life. I don’t want to disturb it at all … #handspinning #lopiyarn #icelandicwool
#tomatotart for lunch - #yumyum - slight burned bits artfully hidden by @stepthehen ‘s skilled #lemonbasil leaf decs - whose been watching #celebritymasterchef then?! #homecooking #homegrowmtomatoes #gardeningforthekitchen

Northumberland is full of secrets!  We’d lived here awhile before somebody mentioned the rock art to us.  Apparently, there were some rock carvings, just off the road to Lowick, not far away from us.  We didn’t think very much of it, and then one day we sort of happened upon the spot.  There’s no sign on the road that something momentous is just off it – only evidence of a track, the indentations in the undergrowth left by people walking off the road, into the little wood. 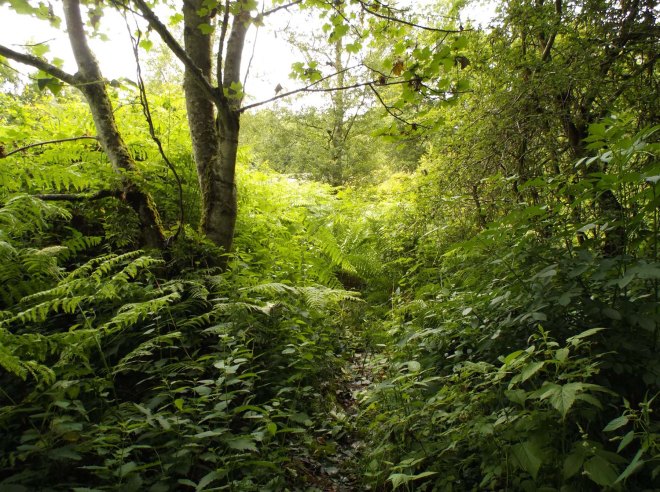 Follow the track then, and there you are, in the grove – a lump of sandstone, with heather. moss and foxgloves growing on the mound and about.  This is Roughting Linn. 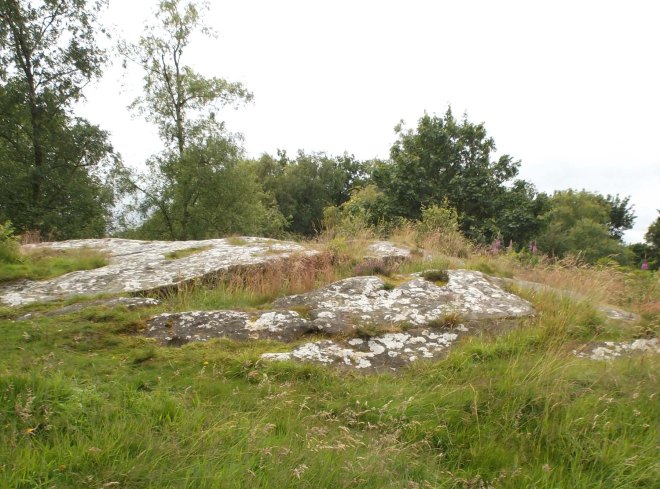 Look carefully, through the lichen, and you will see the carvings. 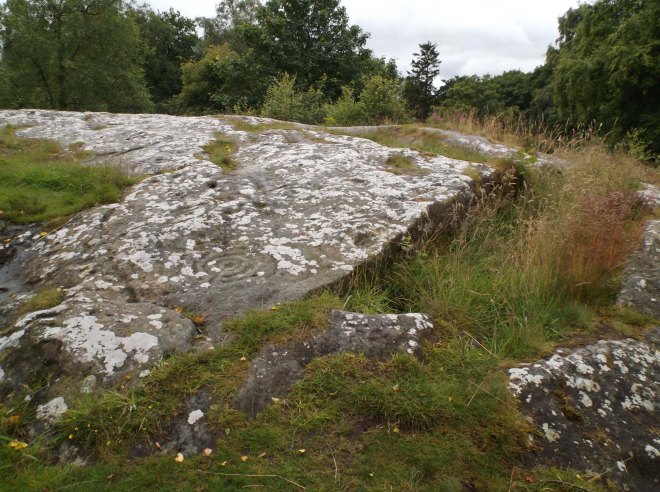 These photos above were all taken when we revisited the site last week.  And they do not do justice to the carvings – a summery day is not the time to look for rock art!  You need the shadows of evening or autumn.

Our first visit was in October 2011 and the photographs we took then show the carvings much more clearly. 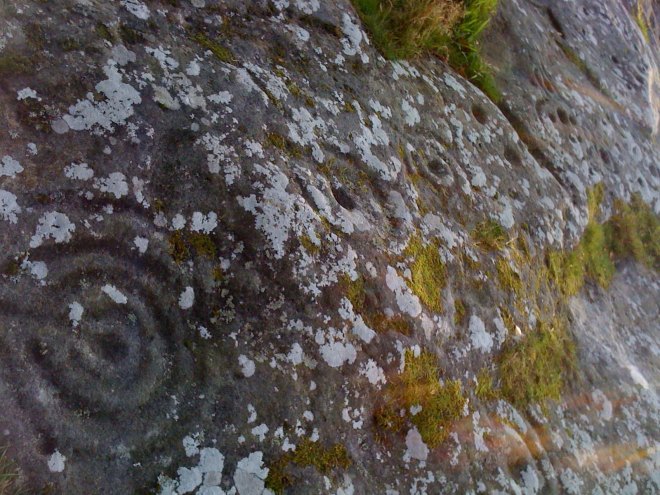 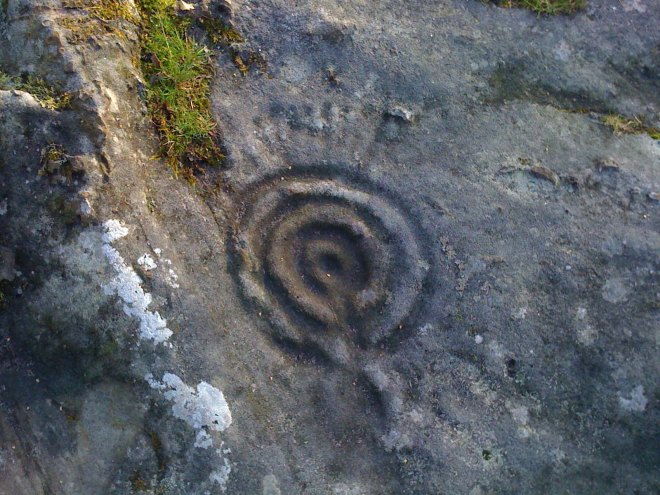 Lots of questions and there are no answers.

What puzzled me most about the Roughting Linn carvings after our first visit was why somebody had felt so strongly about this particular place that they had wanted to enhance the stone with these carvings.

Of course, we see the site quite differently from how our ancestors did.  These rhododendron bushes – modern imports – are a clear reminder that localities change.  The greenness adds to the mystery of the place for us, but the Ordnance Survey map shows there was a small hill fort here – something you’re quite unaware of now because of the trees and shrubs. 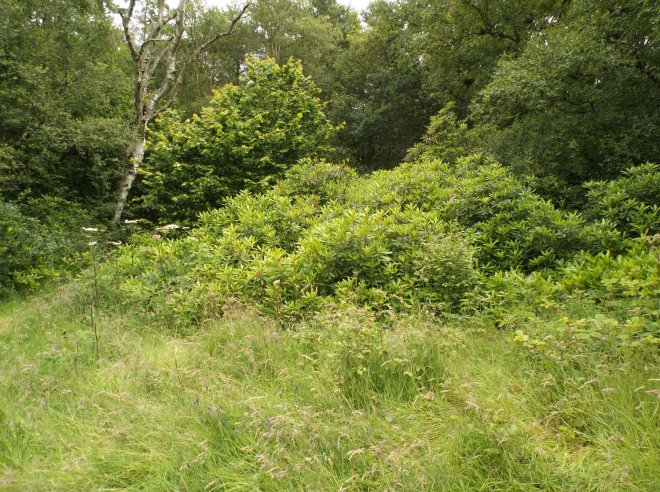 It’s the small waterfall nearby that is thought to hold the answer as to why our ancestors wanted to record their art on this stone – a strange, mysterious and magical place.

Again, you step just off the track into a green world as the path steps down steeply to the stream.

Wet, muddy and very slippery – we both ended up on our bottoms several times as we went down. 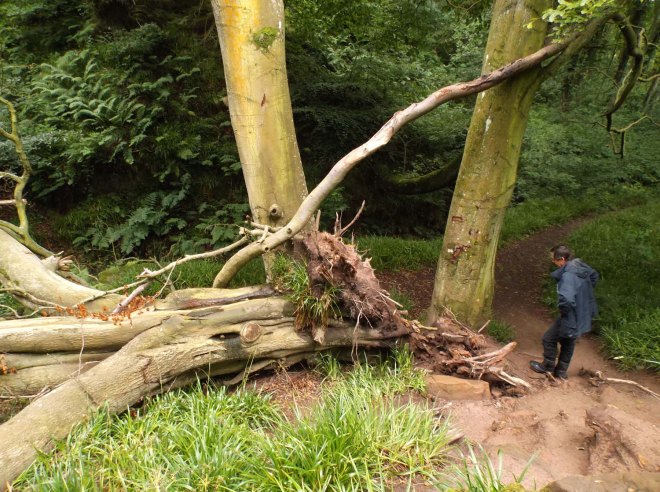 Not as old as the rock art perhaps, but people have wanted to record their presence here for many years. 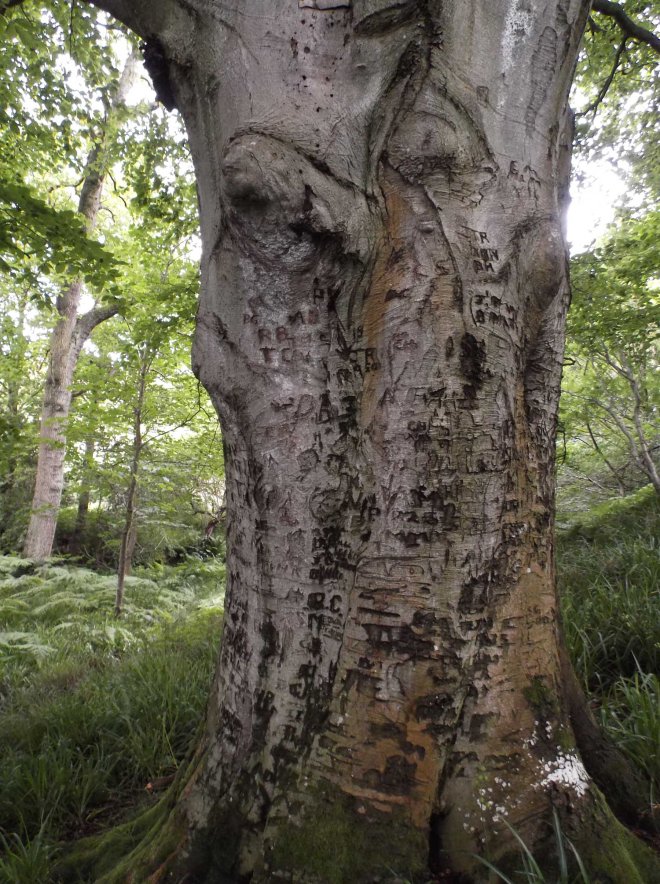 A small cave just off the path adds to the feeling of mystery here. 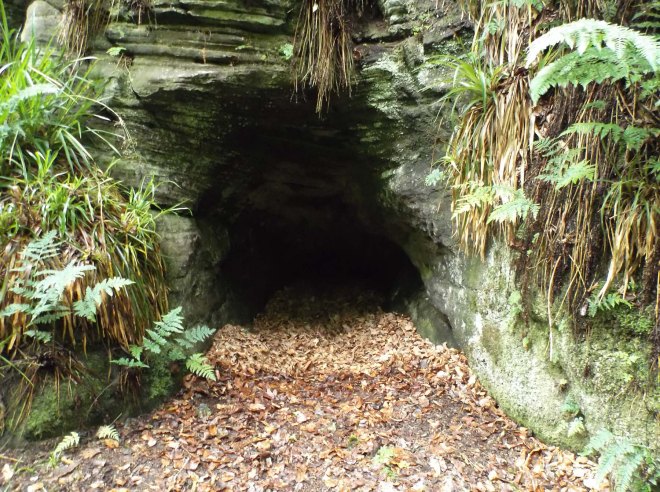 First glimpse of the waterfall. 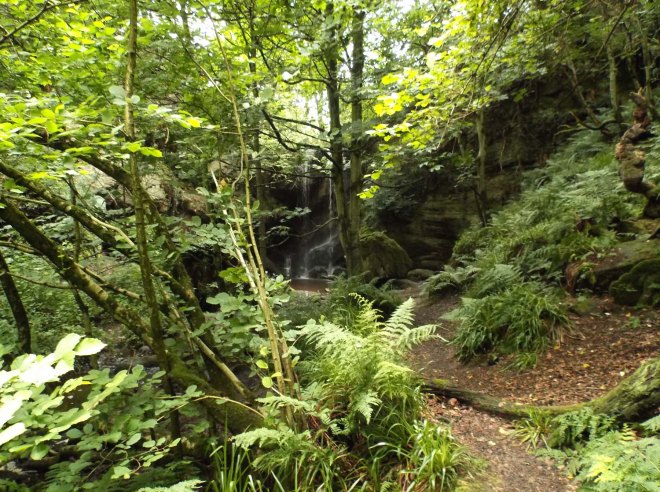 You cannot but approach with the feeling that you are in a special place.  Archaeologists and theologians speak of the liminal: where places are “thin”, where the “other” is more present than elsewhere. 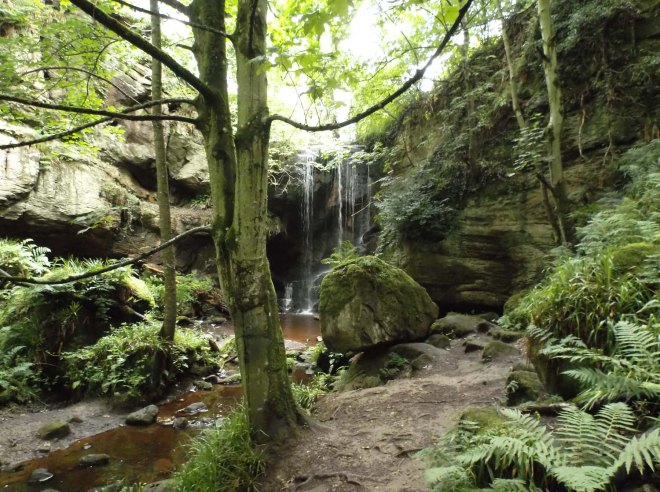 The twisted corpse of a tree – it is as though the very trees are watching guardians of this place. 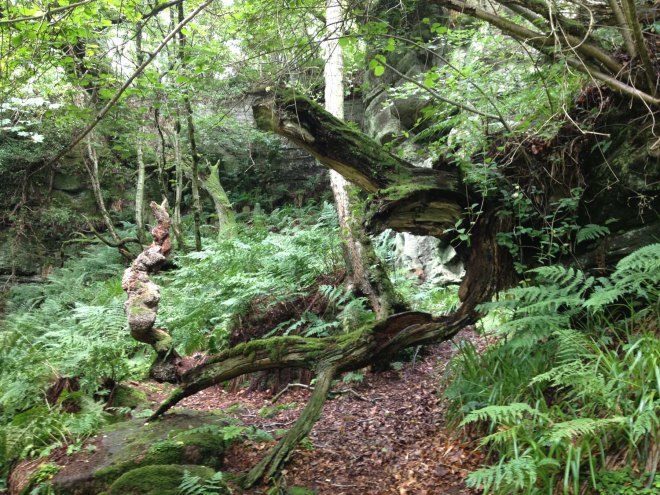 Back to where we had parked the car nearby, and we found this on the wall.  An offering to the gods of the place? 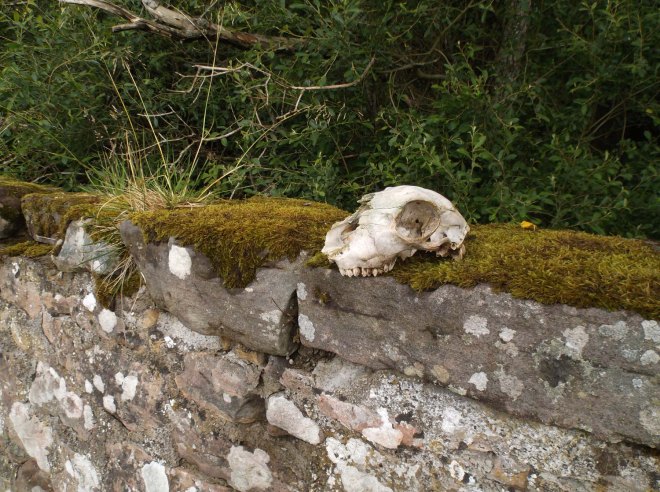 Stan Beckensall was the man responsible for the serious recording of these rock art carvings.  A local teacher, he became fascinated with them, and has pushed for their appreciation and conservation over many years.  The Northumbrian Rock Art website, set up under the aegis of Newcastle University with an AHRC grant, consolidated his hard work.  You can read therein his assessment of the Roughting Linn rock art.

Roughting Linn is perhaps the best known and most easily accessed of the local rock art sites.  But we were lucky enough to enjoy a walk with Ron Shaw up Chatton Hill recently to find more rock art.  Ron is most knowledgeable about this area, having devised the St Cuthbert’s Way path when working as a tourism officer in Wooler.

We set out on a gentle trek up Chatton Hill through beautiful grasslands.  It is credit to the farmer that this site is accessible and well-managed (as recorded in this BBC article). 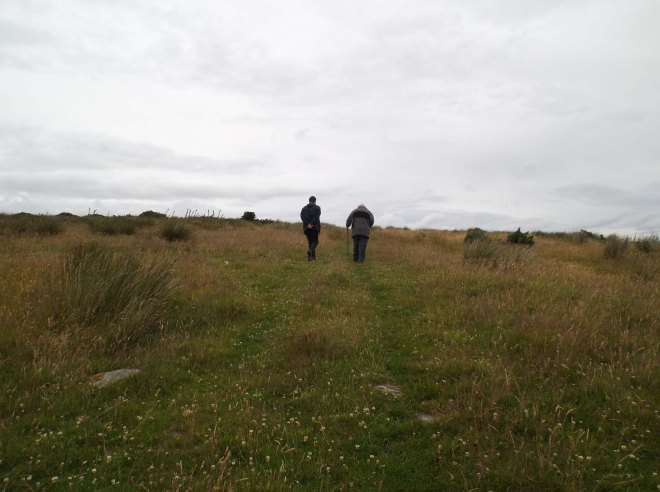 Looking back over the gentle incline to where we had parked the car (the small white speck on the road). 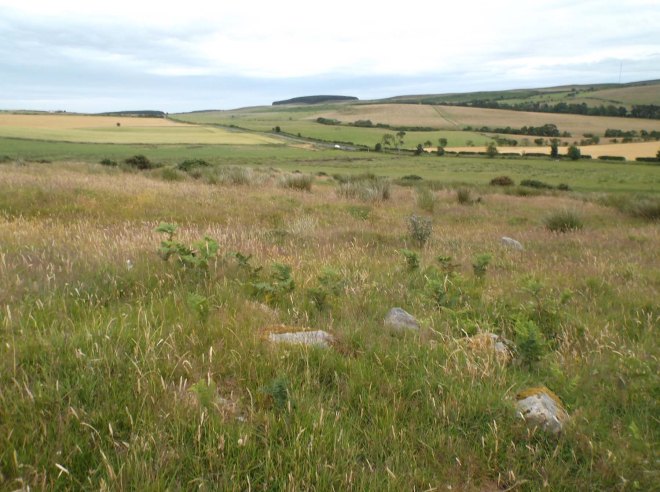 We’ve got a worried sheepy audience – you can sense them wondering why these people are in their fields and heading their way? 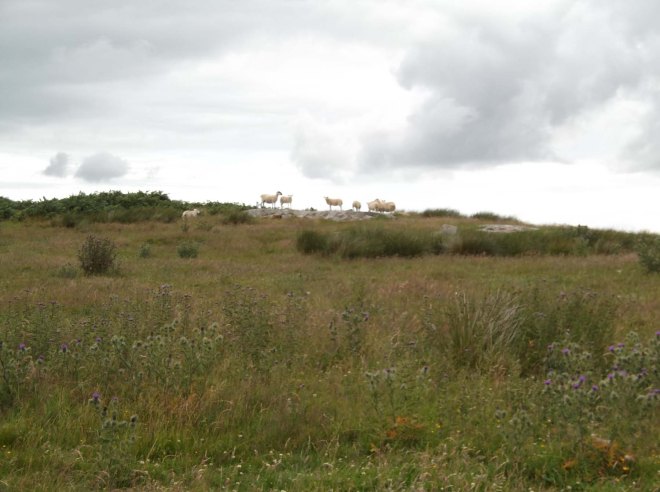 Aah – we’re after the rock art on the brow of the hill.  It takes a while to find it – there’s plenty of sandstone slabs about, and it could be any one of them.   Sadly, it’s not unusual to find examples of modern graffiti. 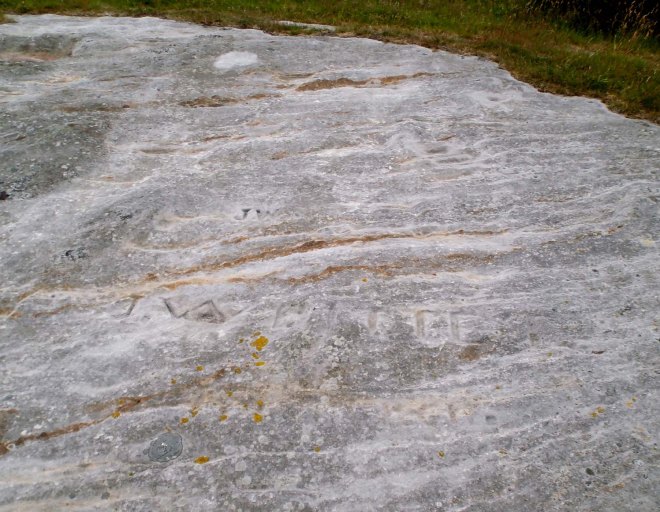 But find it we do, and here is my photograph of the find with the magnificence of Northumbrian skies and the Cheviots in the distance. 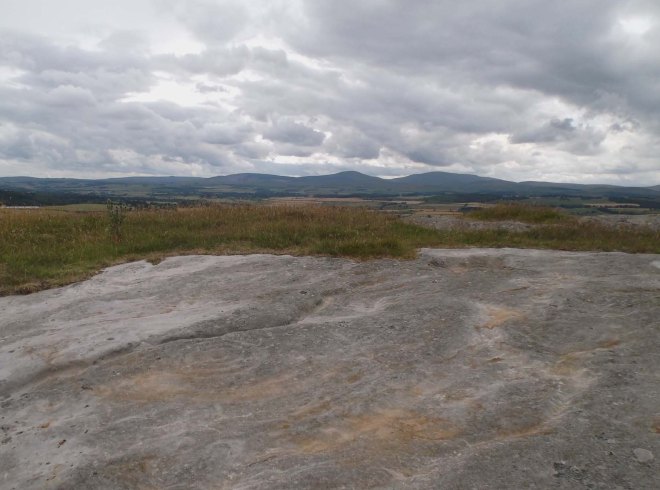 There’s time for photography and the recording of the triumph of finding the specific stone. 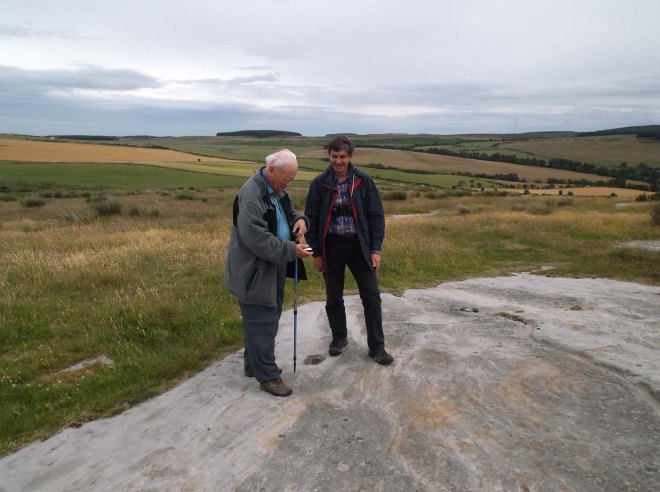 However, we encountered the same problems we’d had at Roughting Linn: the light of a summer’s day (even if overcast) is not conducive to good rock art photographs.  So Shirley, Ron’s wife, has most generously allowed me to reproduce her photos of the same site, (both taken in the early spring, but on different years – you can see the snow of the Cheviots in the lower photo).  These are great photos that do full justice to the site, and allow you to capture the sense of awe our ancestors may have felt on top of a glorious Northumberland hill. 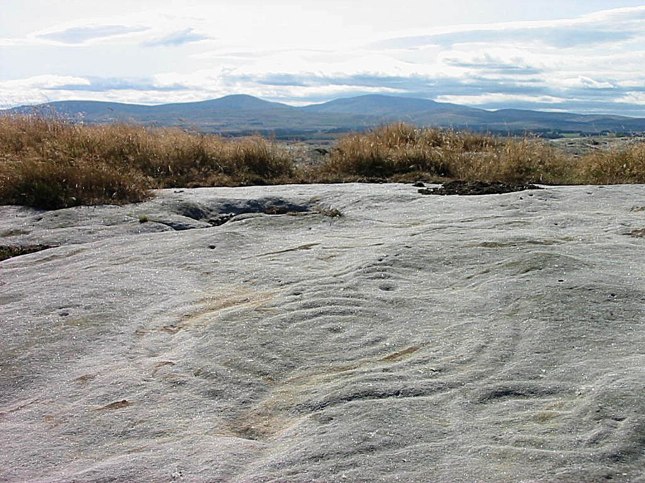 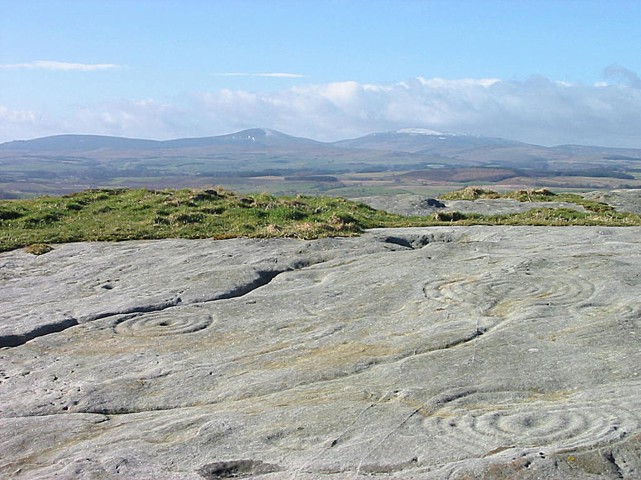 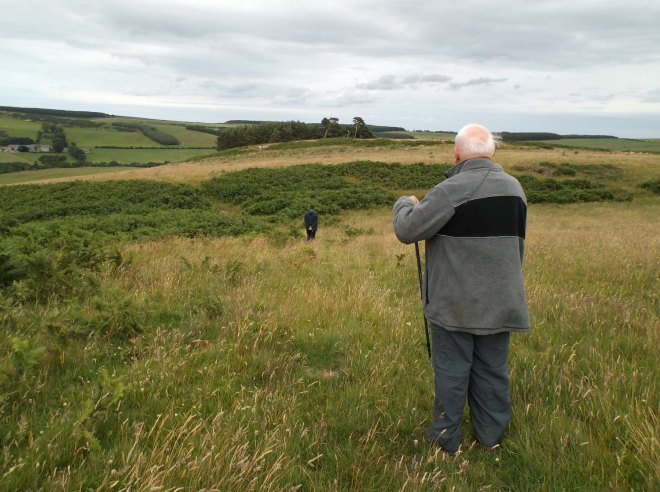 We’re now looking for Ketley Crag which Ron tells us is somewhere on this hillside, but since he was last there the bracken has completely taken over.  We spent quite a while ploughing  through the bracken from sandstone slab to sandstone slab, but no luck.  The Ketley Crag is not for viewing on this trip! 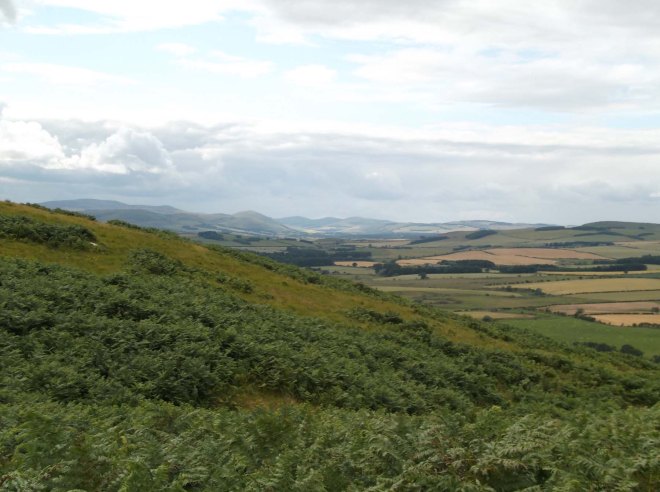 Luckily, Shirley is able to help out again, and here are her photos of the Ketley Crag rock art, taken in the very early spring. 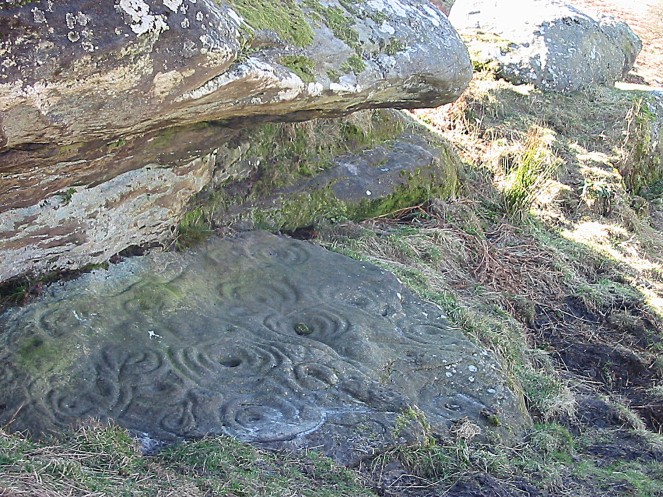 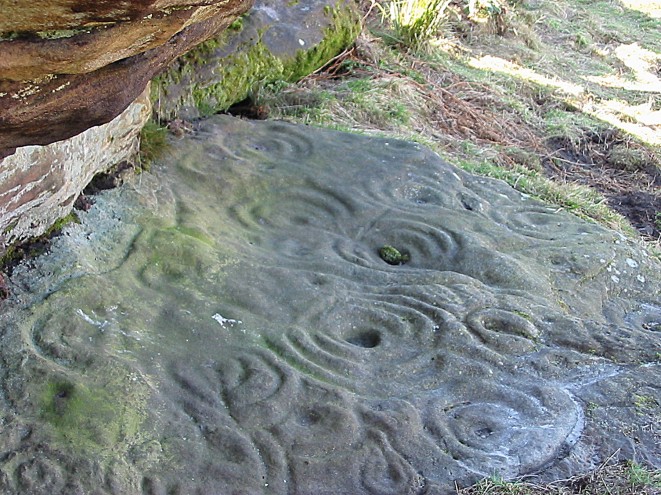 It’s quite different from both the other rock art examples I’ve explored in this blog, sitting as it does under a protruding rock, on the side of a hill.  Undoubtedly a beautiful place, but liminal, awe….no, neither of those descriptions seem to match this spot.  But then, I haven’t actually seen it in person – perhaps if I did, I would “get it”.  Definitely a trip for another day – probably in the autumn when the bracken has died back and the light is softer.  For now I’ve got to settle for these fine photos and what the Northumberland Rock Art database has to say on Ketley Crag. 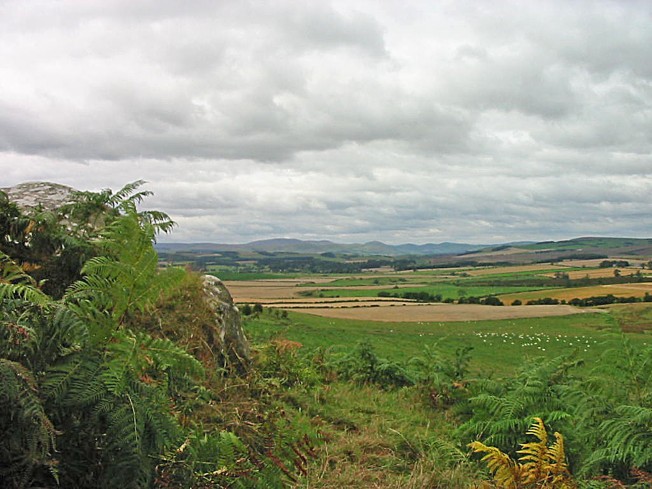 These places leave you silent.  The mystery, the wondering, together with the magnificence of the Northumbrian landscape – what did these artists want to tell us?

(Many thanks to Shirley and Ron Shaw for the use of their photographs and a wonderful guided walk.)