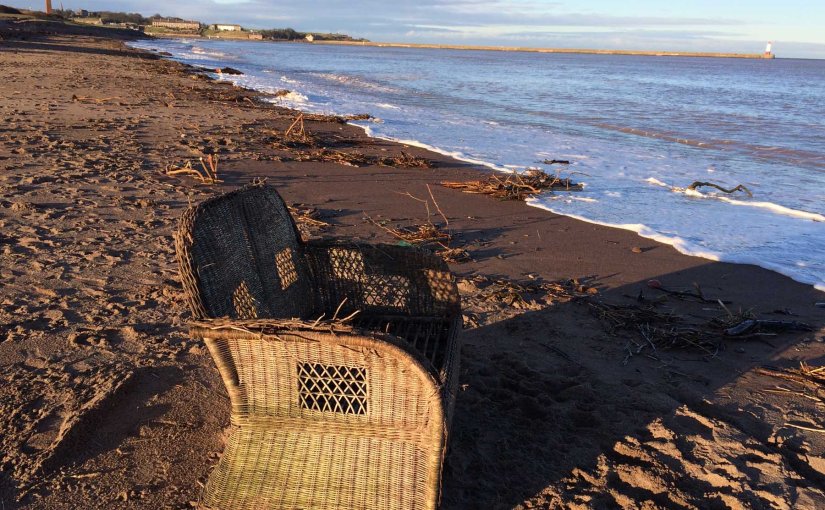 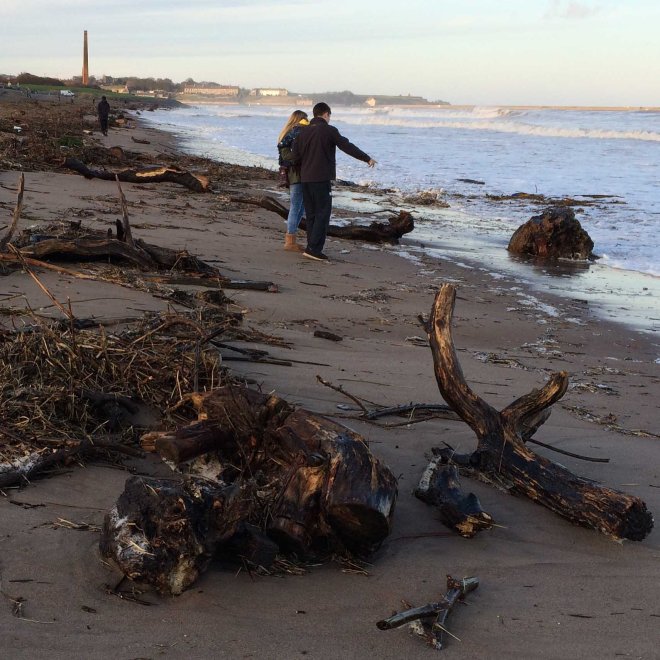 One of the great, great pleasures of living by the sea are the treasures you find  on all those everyday beach walks.

All sorts of things get washed up on the beach.  It doesn’t necessarily take a storm out at sea for us to find intriguing objects on the beach –  but it helps.

We find so many odd shoes!

And bare legs too!

You can’t help wondering about the stories behind these finds.  Were there hysterics when the doll’s leg got washed away?  Furious parents because a teenager had lost one of a new pair of trainers? Was this vegetable meant for Sunday lunch?

We couldn’t believe it when we found false teeth on the beach!  – how on earth?!!! But were somewhat shamefaced when we recounted this story to my aunt, only to be told it had happened to her once…. oh dear. 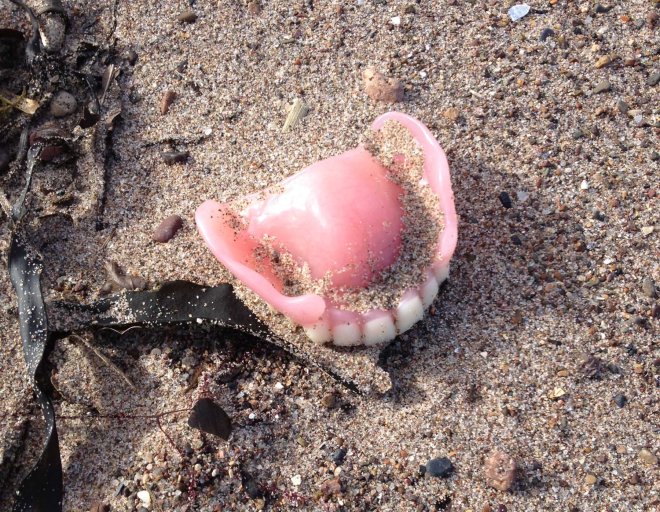 Some finds are more disturbing.  After the terrible floods last winter, we found several dead sheep on the beach, washed down the river Tweed. 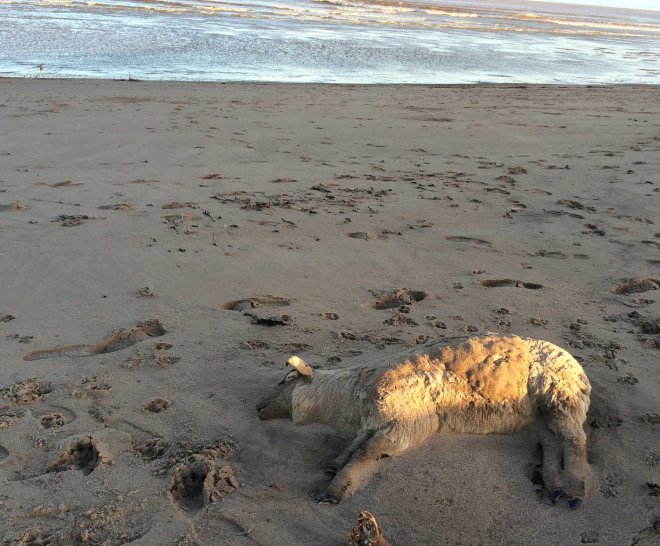 A pushchair – was this a terrible accident, or just lazy parents who wanted to dispose of an old broken one?

Some things come back with us, and we have a “nature table” display on one of the window sills in our kitchen specially dedicated to these finds.

Yes, those are the teeth!  Three baby dummies, would you believe it? And all sorts of children’s toys. 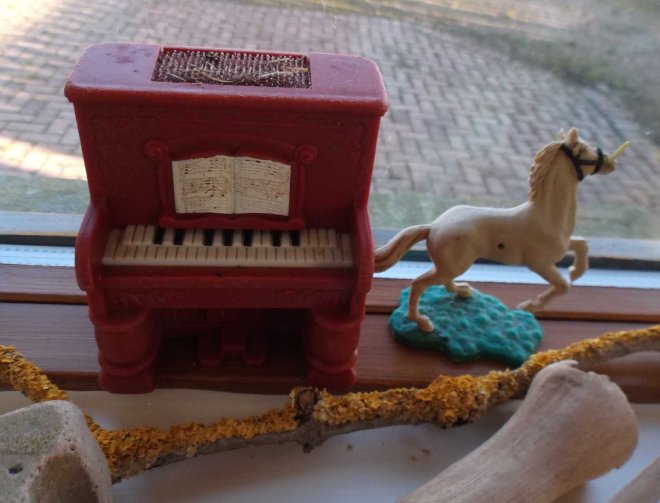 I love Dumbo – we have garlanded her with a child’s bracelet which happened to come home with us on the same day as we found her.

It has metamorphosed with sea growth into something rich and strange. Remember Ariel’s song in Shakespeare’s Tempest?

“Full fathom five thy father lies;
Of his bones are coral made;
Those are pearls that were his eyes:
Nothing of him that doth fade.
But doth suffer a sea-change
Into something rich and strange.”

There are sea potatoes and sea urchins … and plastic too. I thought this was a beautiful sea-blue  jellyfish when I found it -but it is actually the bottom of a water bottle and only mimics a living creature.  How deadly – for all those lost pieces of plastic bottle are being eroded into pellets that sea-creatures ingest.

One special Christmas, we found this small china face. It has pride of place now on the window display.

Two other special things share the pride of place spot: our house mouse and the fish skeleton.

The mouse is not, of course, a sea find.  It was brought into our house alive by our elderly cat, Poe, when we first arrived here – and she promptly lost it.  Many months later, when moving furniture, we found its desiccated body (why hadn’t it smelt?). Presumably, it had hidden from Poe for so long that it had died of starvation. We placed it here on the window ledge, a small furry creature – and then the moths came by and ate its fur.  No respecters of death, they!  So here it is, just papery skin, and presumably all internal organs intact.

The fish skeleton is such a beauty!  Picked clean by bird or fish or the elements, and just look at the curve of that spine! 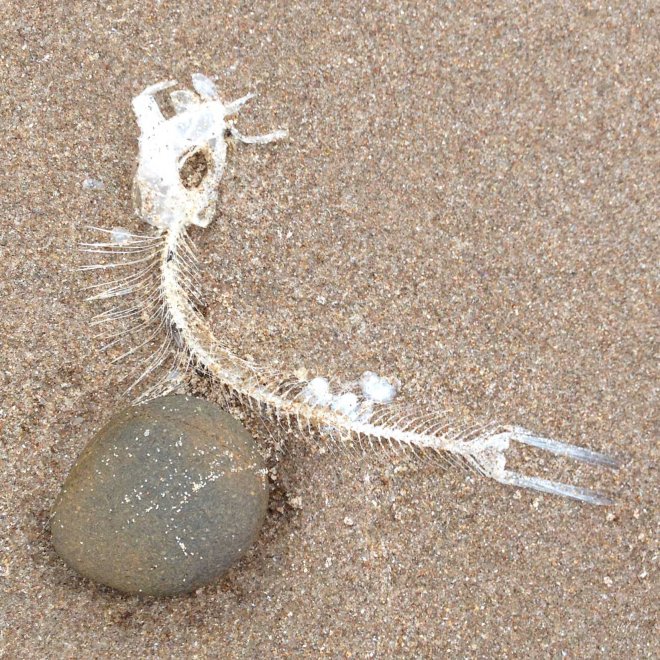 You’ll have realised that all sorts finds their place here. In a humble way, it is our own “cabinet of curiosities”.

Robert Macfarlane writing in Landmarks, tells us of “the ‘wonder-rooms’ of the Renaissance and the Baroque, in which examples of natural history (naturalia), precious artefacts (arteficialia), scientific instruments (scientifica), findings from distant realms (exotica) and items of inexplicable origin and form (miribilia) were gathered and displayed.”

So here are: a pigeon’s claw (still bearing its number), seaglass, feathers, butterflies, shells, cuddy beads (on which more later), glass stoppers, feathers, the pincer of a small crab and fossilised coral. Have you ever played memory games as a child or at a party? These items would be good for that: I packed my portmanteau and in it I put … 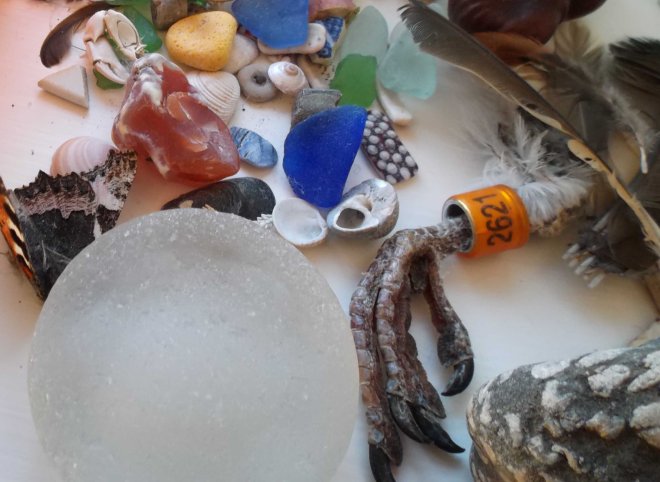 The trouble is our sea-treasures have spread around the house.  The kitchen table doesn’t only have place mats, conserves and fruit – it’s been taken over with broken china and seaglass. Oh goodness – four bowls of broken China and seaglass!

And in the sitting-room, there’s a small oblong tray with a particularly intriguing treasure. We think its the contents of a ready-to-hatch gull’s egg.  It would appear that some predator ate the good stuff and left the soft feathery scalp. 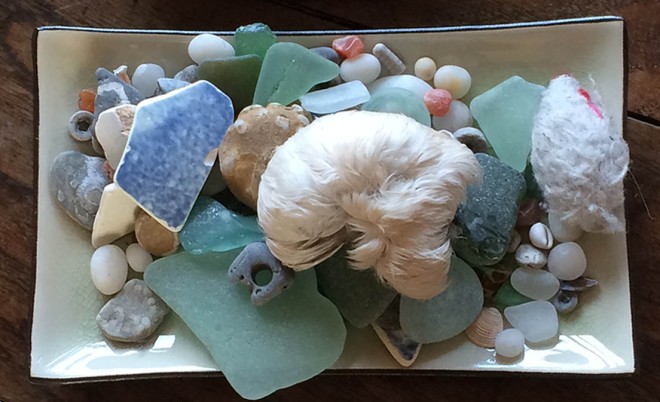 The cats love it! 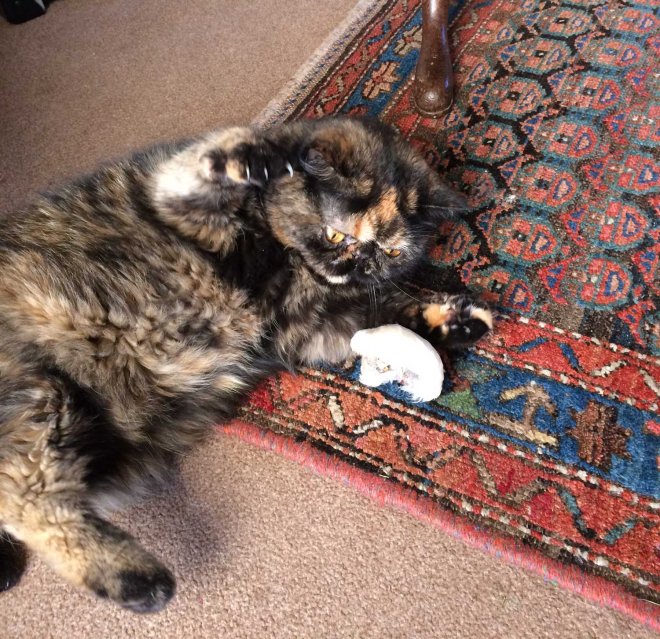 And then in the conservatory – why there are more bowls of sea-treasure! Fossils, toys, old bits of china and seaglass.  I particularly love anything we find that has writing on it.

Every now and then, it’s fun to play with the finds.

To pick out the finely patterned pieces and the lettered ones too.

To sort by colour. 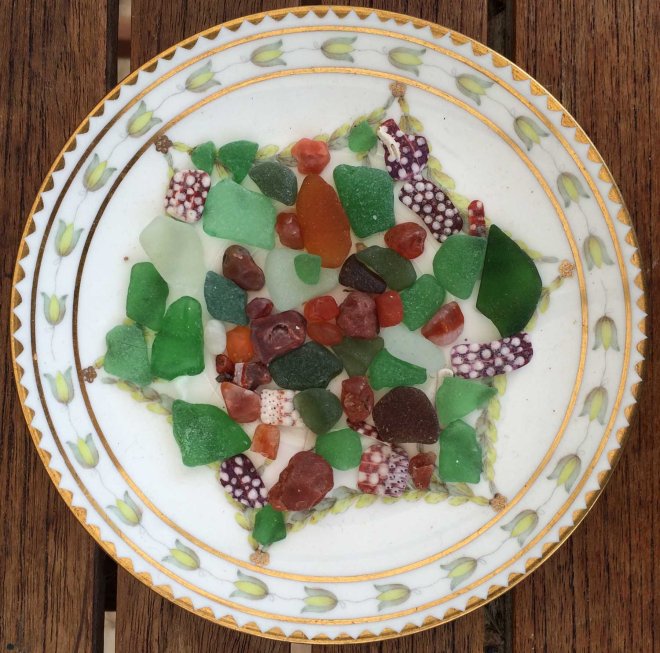 I love the mixture of red-hot geraniums and bowls of old blue and white china.

We find a lot of fossils on the beach round here. Apparently, there is a fossilised coral reef on these shores and the large streaky stone is a piece from that, nicely rounded by the waves.  The other pieces are bits we have picked up on nearby Cocklawburn Beach where we find many crinoid fossils.

Crinoids (or sea-lilies) were plant-liked animals which inhabited these shores thousands of years ago. Locally, we often find them as ring-shaped segments. They are known as Cuddy Beads after St Cuthbert who lived on the nearby Holy Island of Lindisfarne (Cuddy is the Northumbrian name for Cuthbert). According to legend, Cuthbert himself used these segments to construct rosaries – and others say that later folk around would also use them as rosary beads.

Here are some of our Cuddy Beads – some are fat, some thin, some squashed, some already come with holes punched, and some are still in the their stone casing.  I particularly love the ones that have starry holes. You can see particularly fine examples of branching Crinoid fossils on Palaeontologist fiann_smithwick’s Instagram feed.

When my daughter Helen last visited she put together this wonderful composite picture of fossils we found on the local beaches.

In the garden, there are yet more piles of seaside treasure – old toys, shoes, a doll’s leg, interesting stones. 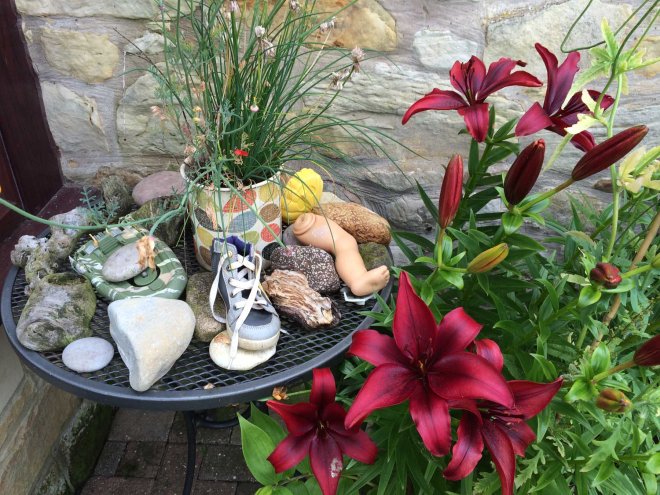 There are interesting bits of wood too.

Truly the seaside is a magic place.  You can lose yourself for hours there, searching for treasure. 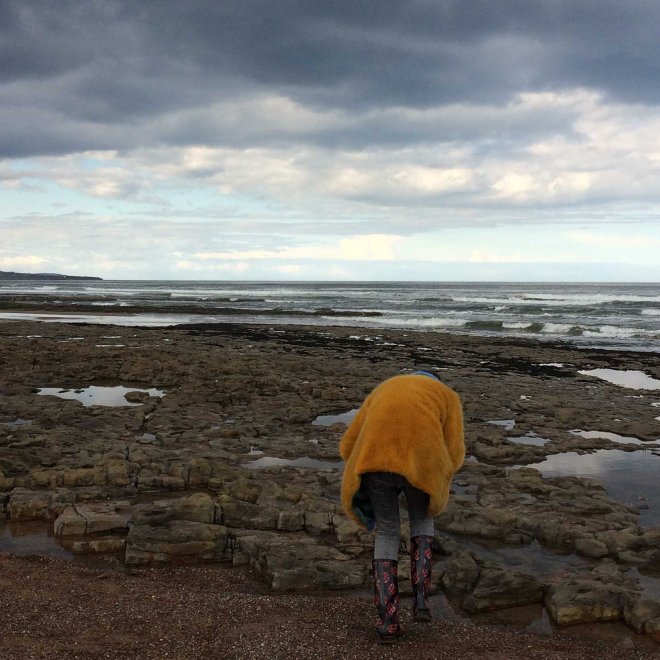 I think e.e.cummings puts it best:

and maggie discovered a shell that sang
so sweetly she couldn’t remember her troubles, and

and molly was chased by a horrible thing
which raced sideways while blowing bubbles: and

may came home with a smooth round stone
as small as a world and as large as alone.

For whatever we lose (like a you or a me)
it’s always ourselves we find in the sea.

20 thoughts on “Flotsam and Jetsam”