Last week I was in Devon, visiting old and dear friends – people and places.

I lived and worked in Mid -Devon for over thirty years. My first husband was a keen sportsman, so I knew the sporting venues.  In later years and after a second marriage to a secondary school teacher, I got to know the local schools well as my children grew up. We were involved with the local churches, brownies, cubs, schools, the local community. So there are many, many places and people I know there.

I usually pay an autumn visit to Devon.  It suits me because our own garden isn’t so demanding at this time of year.  And I must also confess to a longing for trees! If you live by the sea, as we do, you may understand this yearning.  However, beautiful and refreshing the sea is, we need green.

So Shobrooke Park was probably top of my list of places to visit.  Few things give me as much contentment as a walk down its lime walk …

So many memories come flooding back. My children when small making dens … 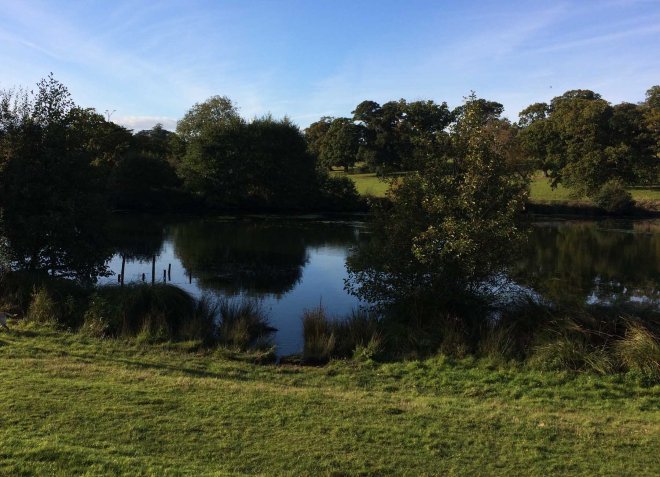 One winter, it was so cold and snowy that we did the unforgiveable and let our small children play on the ice …

And here is one of most beautiful settings for a cricket pitch, surely, in all Devon ….

My first husband was an enthusiastic cricketer, so I was regularly involved in the making of cricket teas – quiches, cakes, sandwiches, pies – the cricketers were wonderfully fed!  I don’t think today’s partners slave as biddably as we did in the cricket pavilion then.

It’s all very superior nowadays – they even have proper nets! 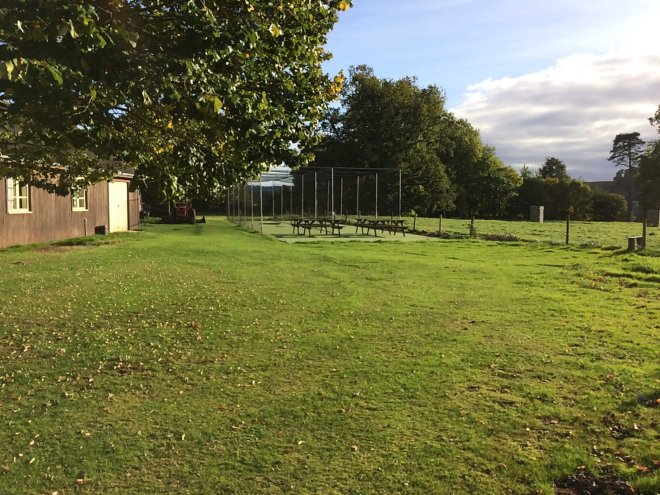 But somethings don’t change – isn’t this the grass roller I perched on in my 20s? 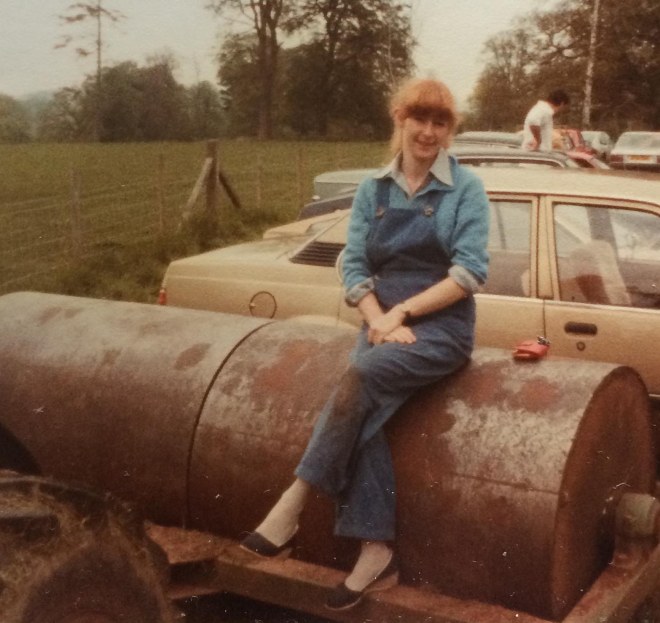 Walking round Crediton, I passed our old home – why they’ve repainted the front door pale blue! 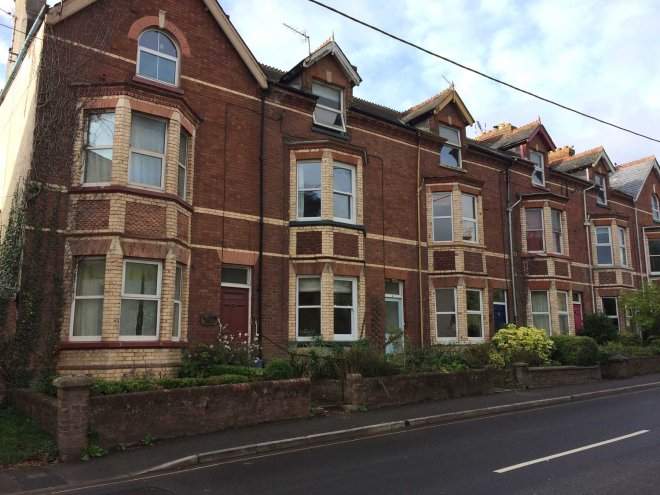 Past the school where Stephen used to teach …

On the nearby green is the Millennium Cross …

Which I lovingly garlanded with a primrose wreath one Easter … 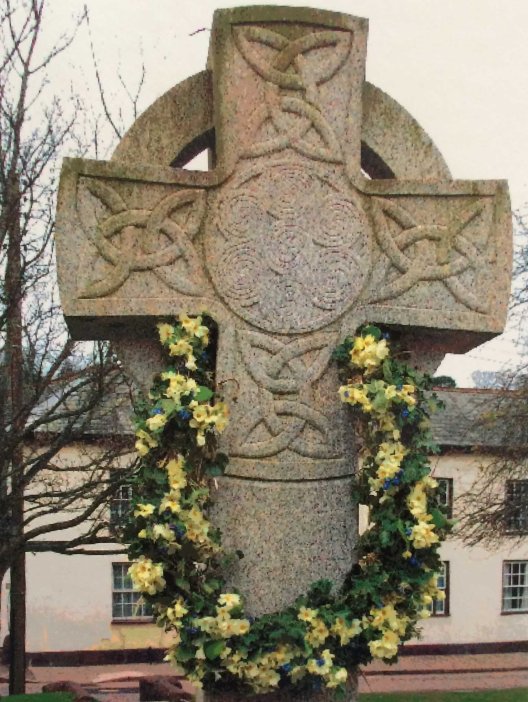 There’s some new-fangled QR reader sign now there as well! 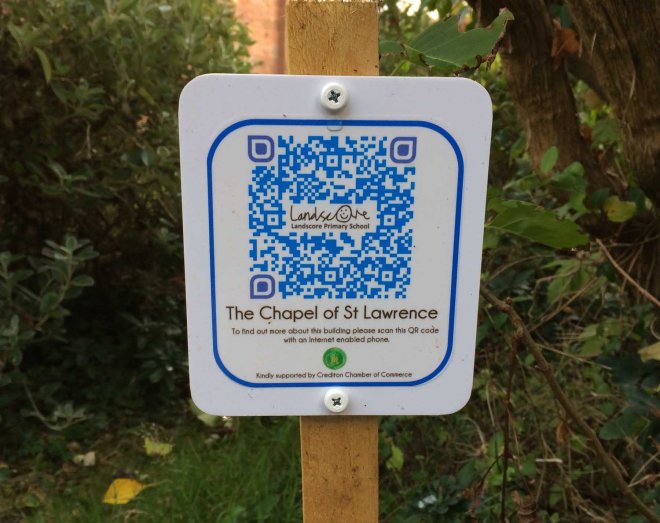 We looked after the Chapel and its garden for twenty years, and over that time the garden really blossomed.  Here is the younger me, one springtime, weeding there. 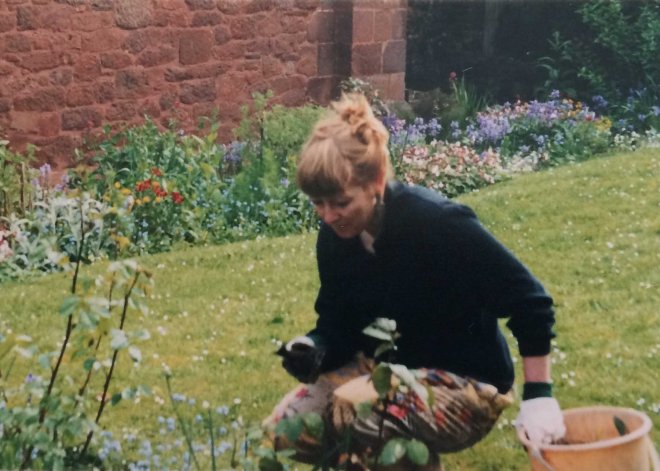 It was a fabulous place to garden – a small enclosed space …

Why, in my mind’s eye, I can take myself back to this very same spot twenty-five years ago when Stephen and I were married here, bringing our two families of six children together … 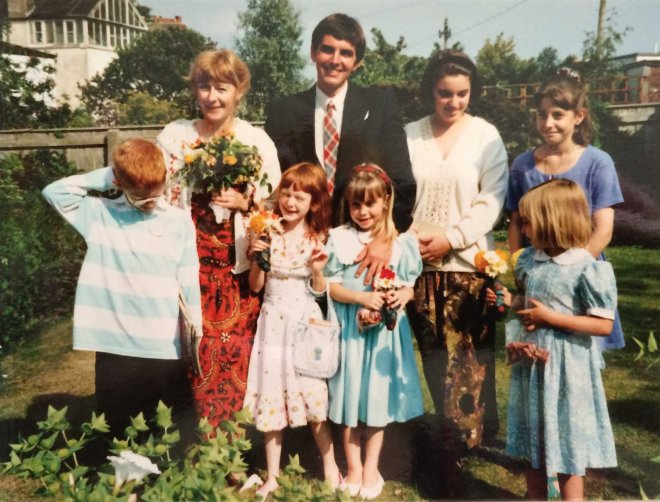 On then to visit one of my oldest friends (literally). For a while Eileen was my neighbour, and, perhaps most preciously of all, she taught me to spin. What a debt I owe her! My spinning was never anything like as good as hers, but after all she was President of the Devon Guild of Weavers, Spinners and Dyers.  And here she is, well into her nineties, inspecting my latest knit of my own homespun wool. 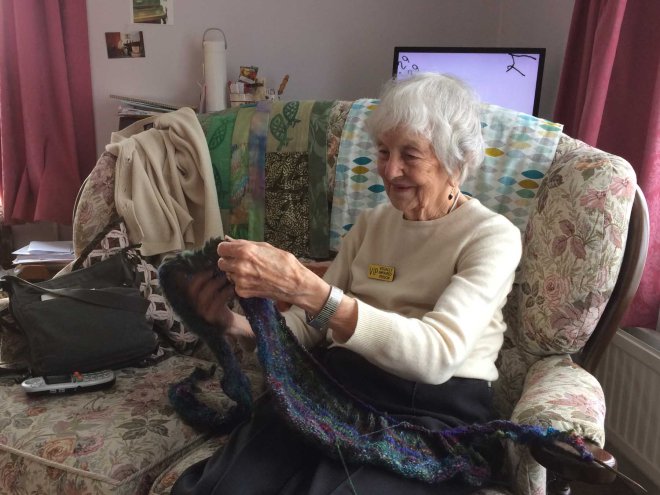 Then lunch with some more of my dear Devon friends, the Shobrooke Ladies  – we all lived in that village when our children were small.  We have shared each other’s lives as our children have grown, settled, married, moved, our parents have passed on, grandchildren have appeared, and we have all finished our working lives, and moved on to retirement.  How special to catch up – it was just as though we still met up once a month to share the latest news in our lives!

Then time to visit Topsham where I stayed with another dear friend, one of my old library colleagues.  Such a magical view out over the Exe Estuary from her home!

And a beautiful walk round the estuary the next day.  Topsham fascinates me with its similarities to Berwick-upon-Tweed where I now live.  Both are estuary towns, – and both have a fine collection of swans …

Like Berwick, the buildings in Topsham reflect the pursuits of local business.  In Berwick there are red pantile roofs that merchants brought back as ballast from their business trips to Europe.  In Topsham, you can see the Dutch gables the merchants learned to build after their continental travels.  What struck me particularly is the wealth here in affluent Devon compared to the poverty of north Northumberland – these buildings are so well kept. 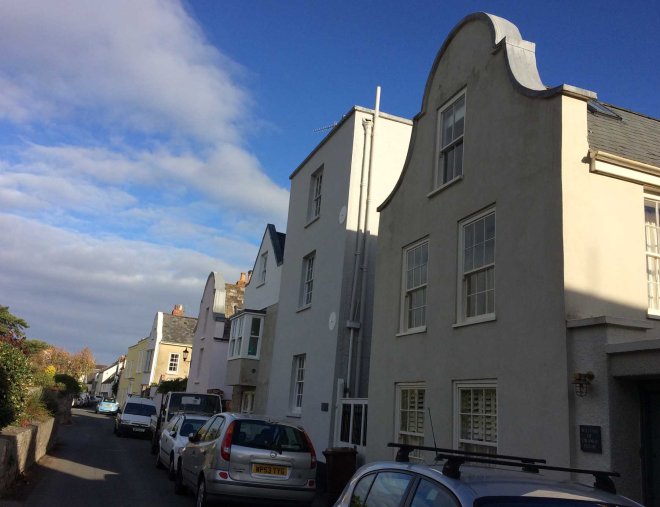 We had a magical walk, along the estuary, turning off to see the fine display of cyclamen near the Goat Walk.

Are they not a delight?! 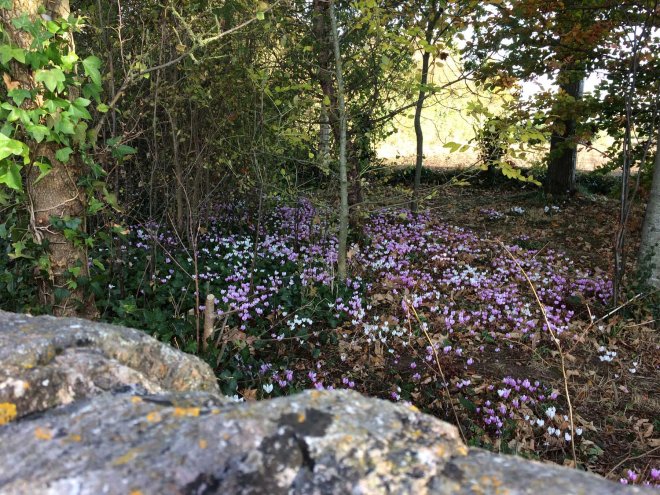 Our walk took us further along the beautiful Exe estuary …

Back down woody lanes – I was drinking in the greenery all the way. What really struck me was that this was almost the first sighting of trees colouring that I saw.  What very late autumns we are getting …

And past the Shrubbery house where Stephen’s Aunt Barbara used to live.

And back to Shobrooke village for my last night in Devon, and a glimpse of the beautiful red Devon hills from the cottage. 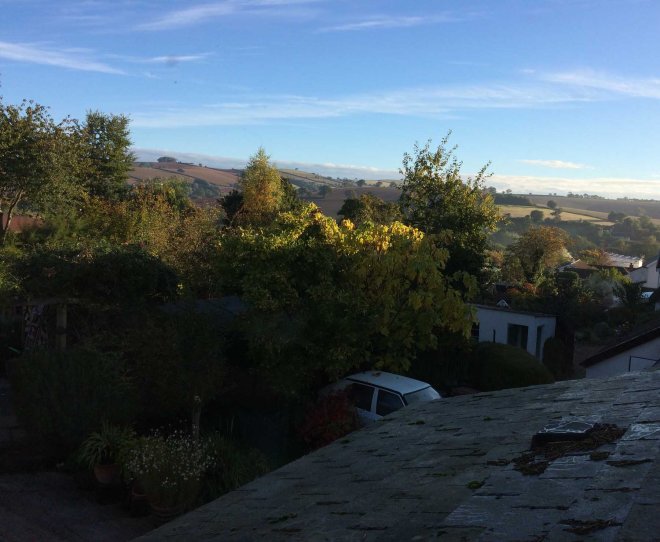 A hug and a giggle with an old friend – indeed, we were flatmates together in London in the 1970s so we go way, way back – before I caught the train back to Northumberland … 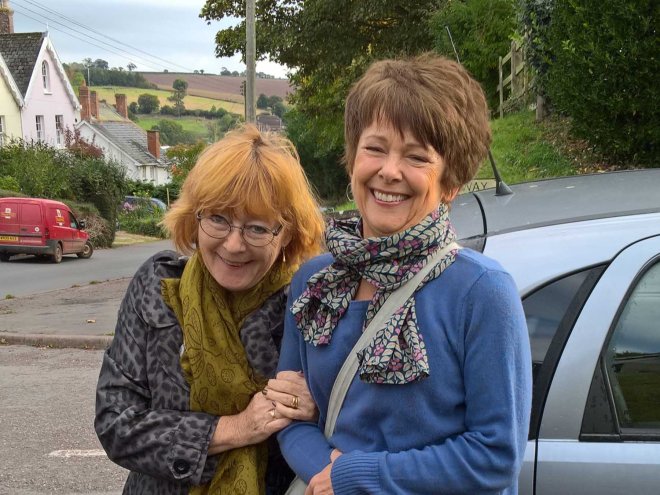 So why – I hear you asking – don’t you still live in this lovely county with these dear folk?!  Ah well, I have been seduced by a small Northumbrian cottage with the sunrise in its windows … 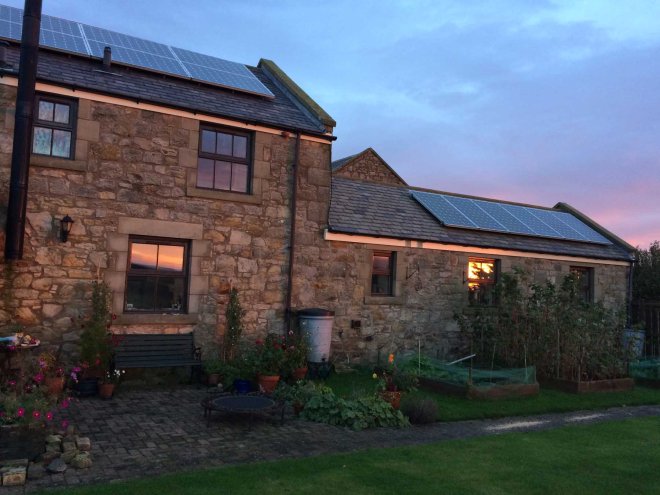 and our view of dawn over the North Sea!