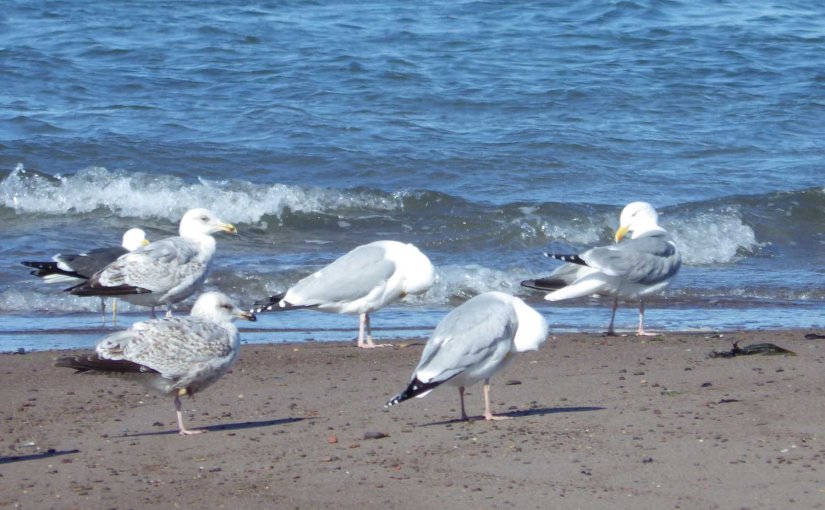 The local press is full of shock horror stories about the modern devils of the high street: the seagull. 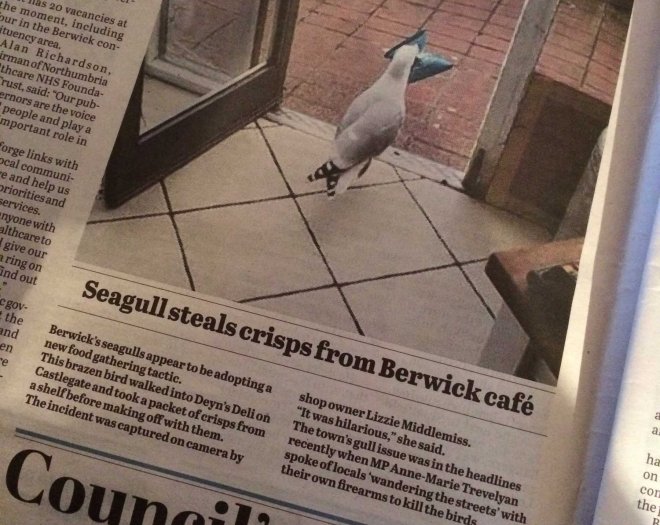 Apparently some one in Berwick has taken to shooting them, and our local MP is warning against such vigilante action.  I have to agree with those who write about the disgusting mess the seagulls leave in our towns and cities. A brief walk around sunny Berwick a week or so ago, left that in no doubt. Would you want to sit here?

Other councils are talking of handing out hefty fines (£80!!) for those who feed these high street pests.  There is no doubt that the seagull does have a sharp eye for rubbish! 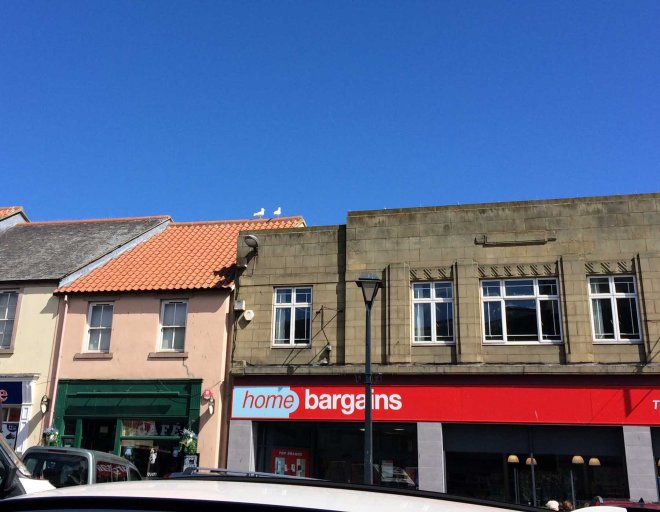 However, we are lucky because we see another side of the gull story. And just at the moment I’m missing them.

One of the pleasures of the slower wintry days has been field-watching. These fields, looking south towards Scremerston and over the coast towards Holy Island, are very familiar to us now. Here, after heavy rain last November, you can see the old parish boundary marking the borders of the Municipal Borough of Berwick-upon-Tweed. It reappears in the form of the curved waterway running over the field between the two larger ponds. 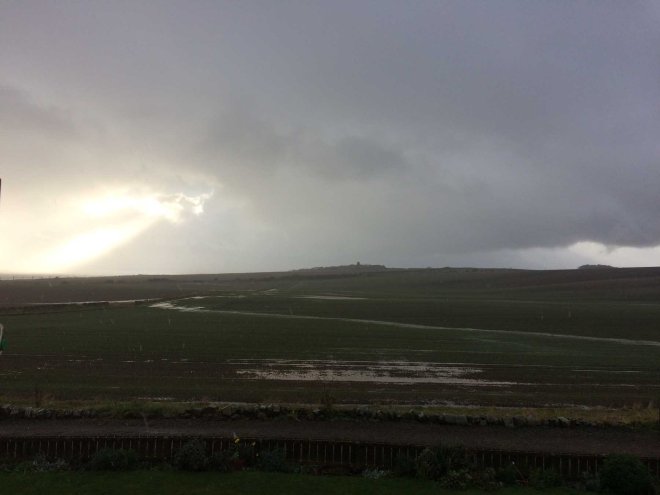 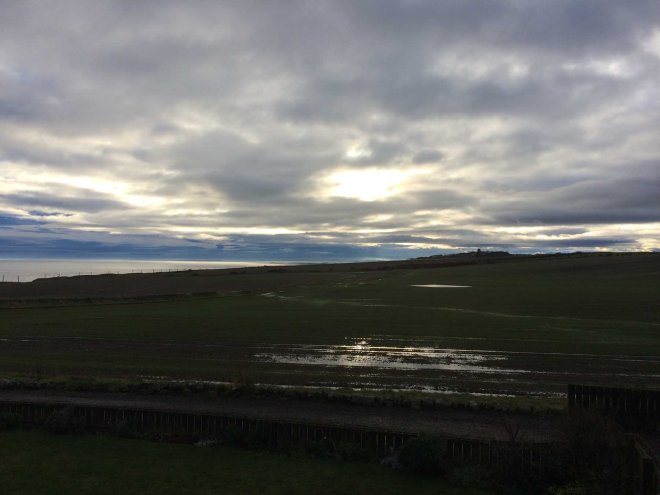 The ponds lingered – and came and went.  As did the gulls. Sometimes there’s just a solitary gull … 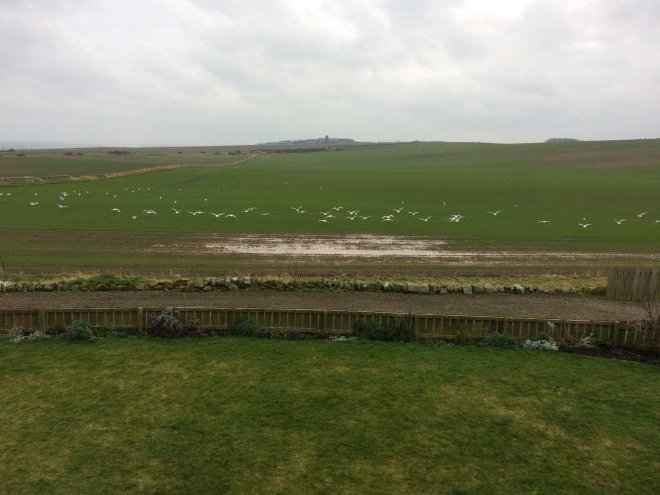 and working the field …

There are visitors too on the far pond … 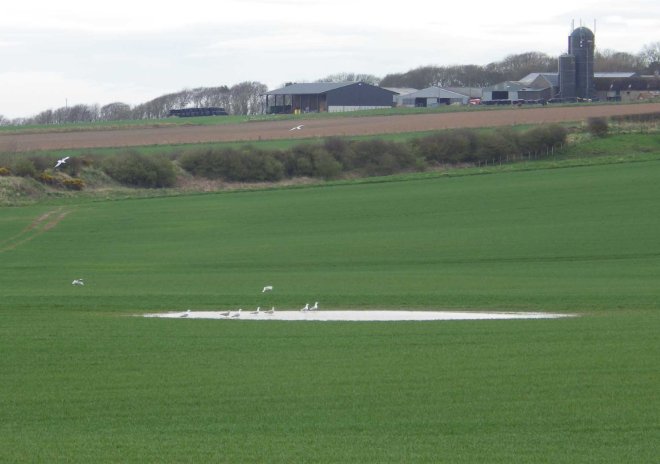 They come and go …

Not entirely. A solitary gull has been known to come and eat at our table … 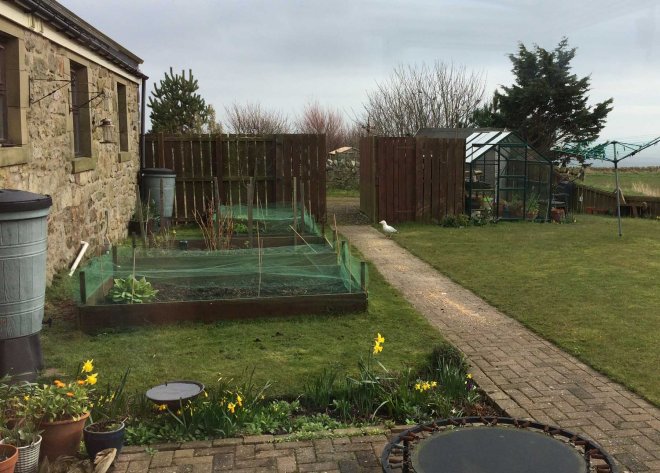 Leaving in haste, when sighted! They are funny birds to watch close up because their descent and take-off can be so very clumsy. 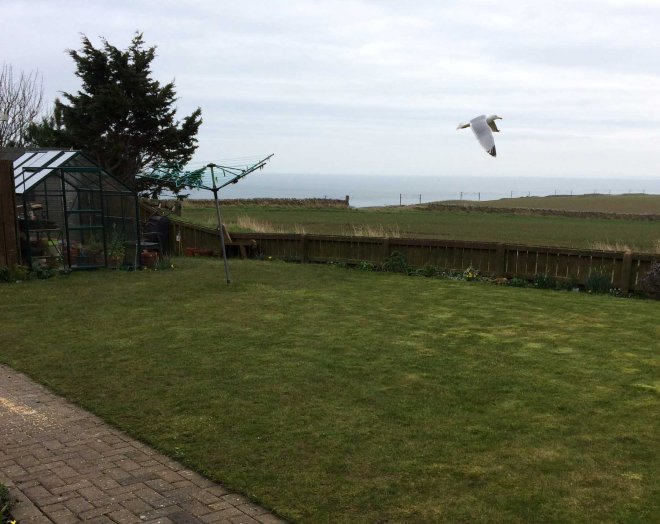 We don’t have to go far to see the gulls on the beach. Just how glorious can they be when sighted in feeding frenzy as on this cold winter’s day several years ago. 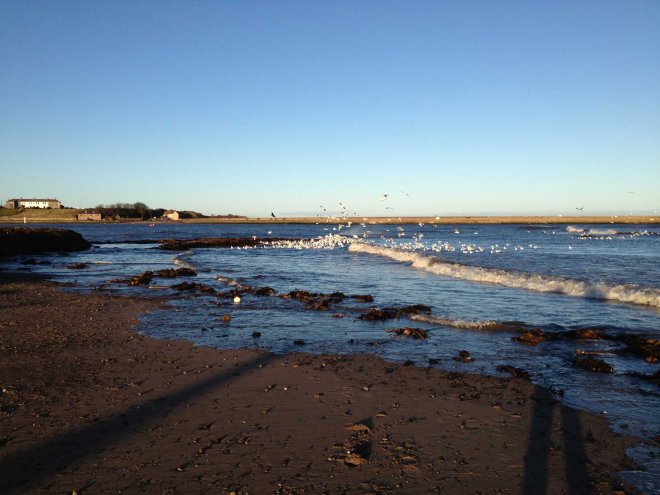 Sometimes you see a little more besides …

They have a talent for striking the stylish pose – always good at finding a fine vantage point. 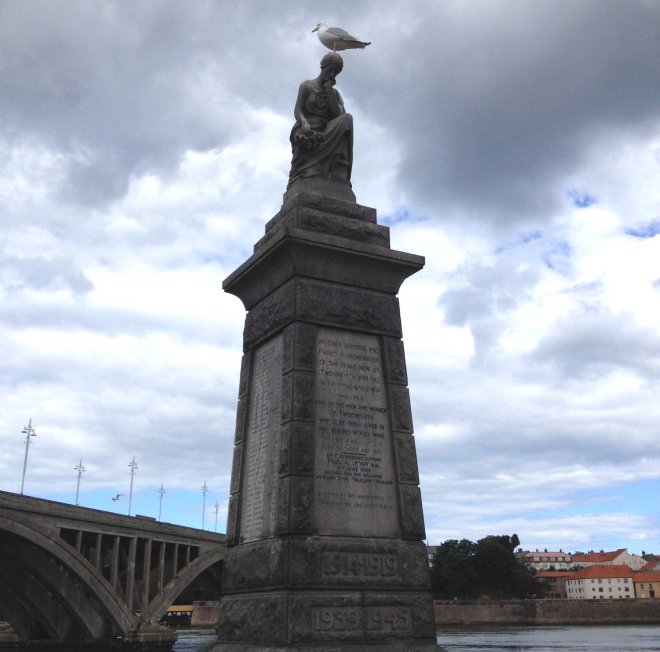 And they can be hilariously funny too.  One summer we watched this young greedy gull pester its parent for food … 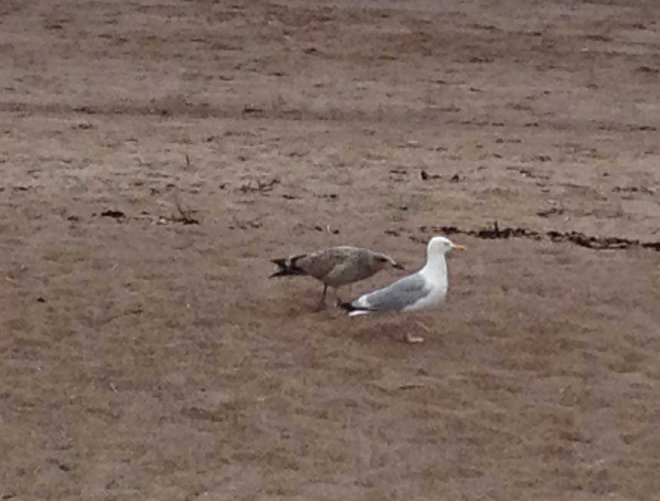 The parent gave way, fed the baby bird (aren’t they the ugliest babies you have ever seen?!!) …

We’ve also seen harsh reminders on the beach that life for the gull can be all too nasty, brutish and short …

We think it belonged to a seagull chick or fledgling that was unfortunate enough to meet a raptor very early in its life. The underside is soft downy feathers and fragile bone.

The cats love playing with it … just check out this natural born killer … those claws!

Perhaps the best time to enjoy gulls is when they plough the fields – more often in the autumn round us than the spring. 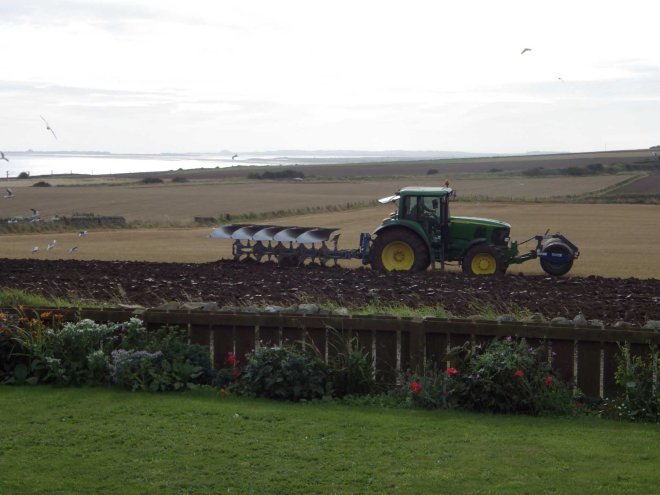 Aaaah – the light on those wings as they scramble to follow the plough!

If you’re of a certain age (as I most definitely am), you’ll recall Richard Bach’s book, Jonathan Livingston Seagull. In very very brief, it’s the story of one particular gull’s striving for perfection in flight.

It’s about soaring, swooping gloriously above …

I love Jonathan Tulloch’s description of seagulls as “raggedy angels”. Writing of his stay in a Birmingham hotel in a recent edition of the Tablet, he says: “[…] all I could hear were seagulls. I opened the window and their kookaburra-like laughter filled the room. There they were, soaring over the skyline on slightly tattered wings like raggedy angels.” How very much more vivid is this evening view of Tweedmouth for the gull soaring in the sky above?  It hints at that raggedy angel’s view – worlds and aspirations and hopes of which we mere mortals can only dream. 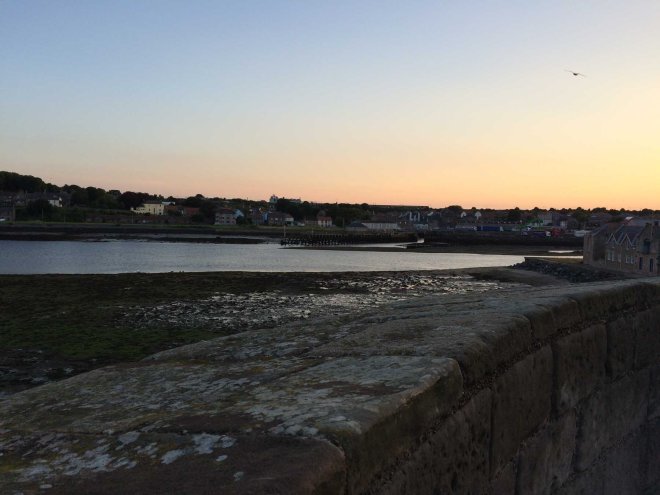 (Apologies both because I am being slapdash in using the common term Seagull for what I know are several different breeds of birds.  And secondly, because my iPhone5S is woefully inadequate to the challenge of photographing these fantastic birds.)

17 thoughts on “In defence of the humble seagull”