I have long wanted to walk more in the Cheviots, but one way and another it always seems to get put on hold.  Which is silly, because the Cheviot Hills are only some 30 minutes or so away from us.

Last week, an opportunity for such a walk presented itself – and we headed off  to Yeavering Bell.  It wasn’t that nice a day – and the photos weren’t that brilliant because the day was so overcast, so I’ve dithered about writing a blog or not.

But I’ve decided finally to write the blog after all, if only as a record of the wonderful sensation of being at the top of Yeavering Bell.  Bear with the photos, please. I hope an account of the magnificent Bell will compensate.

We set off with this nicely-produced leaflet from the Northumberland National Park in hand.  The pictures are nice, but the map – and the text – is a bit fanciful, and gave us some grief.

We parked at the foot of Yeavering Bell, and set out past the few cottages there to find the track this leaflet recommended.

But we had decided to follow the map inside our leaflet, and that instructed us to ignore the steep permissive path straight up the hill and take the slower and more gentle approach round the side where we would join St Cuthbert’s Way.

So we set off up the gentle track – very pleasant walking …

… a gurgling brook in the dip beside us … 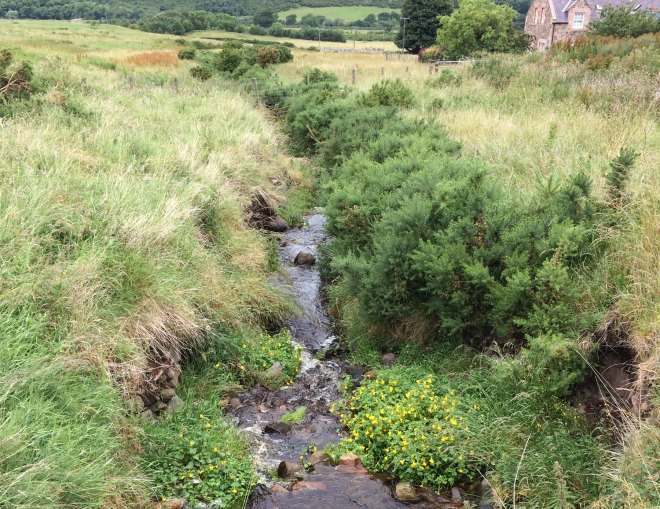 But very soon we began to hit problems because we needed to find St Cuthbert’s Way for our turn to the left – and we just weren’t sure which turn that was!!We had several opportunities to turn off the track, but there were no way markers.  So we continued.  Eventually, we arrived at this confusing sign ….. looks like we could go any which way …. but none of them were St Cuthbert’s Way! We puzzled, and puzzled …. and then happened to walk round this very tiresome waymarker, and lo and behold ….

… the direction to the Hillfort Trail was also the St Cuthbert’s Way by another name!

Relieved to have made sense of our route, we set off more confidently. 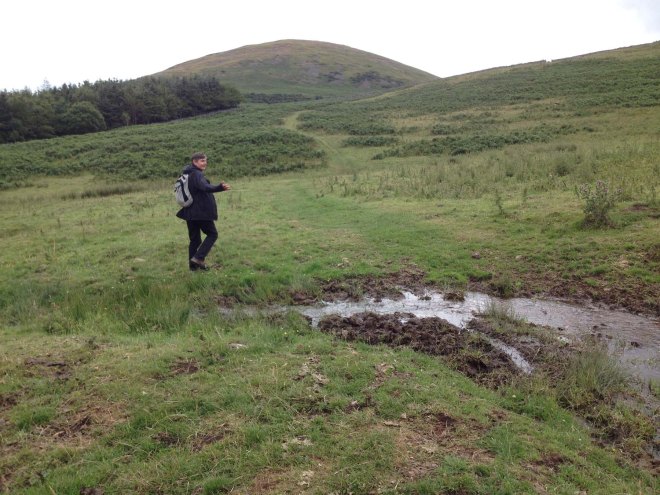 And luckily, after our initial problems, our route was well-marked.

Leading up and up … the path getting markedly steeper …

But good waymarkers now.  We were clearly on track …

Worryingly Yeavering Bell was still looming up very much on the left of our path with an increasingly deep gorge of bracken (and a stream…..?) opening up between us.

At this point we stopped for a break. No pictures, I’m afraid, because this is where I had what can only be called a paddy. I had realised – actually we had both realised, but Stephen had accepted it in a phlegmatic fashion – that, having already climbed quite a steep incline, we were now going to have to go right down into the valley – and then start the climb proper to Yeavering Bell. Aagh!!

And I had to laugh … 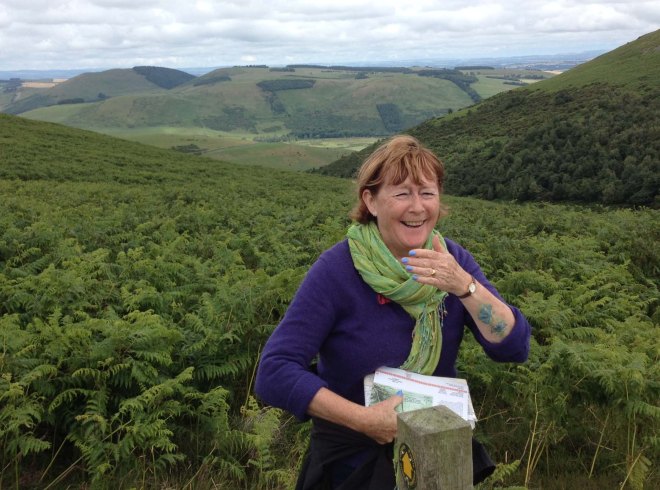 And I laughed hysterically! 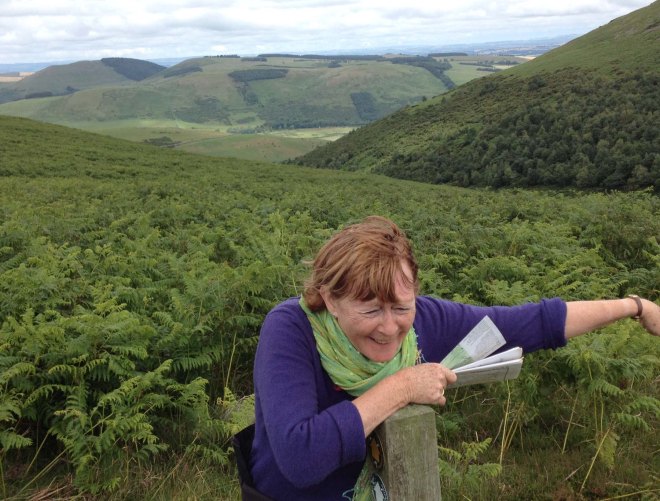 As I worked out the route going down … 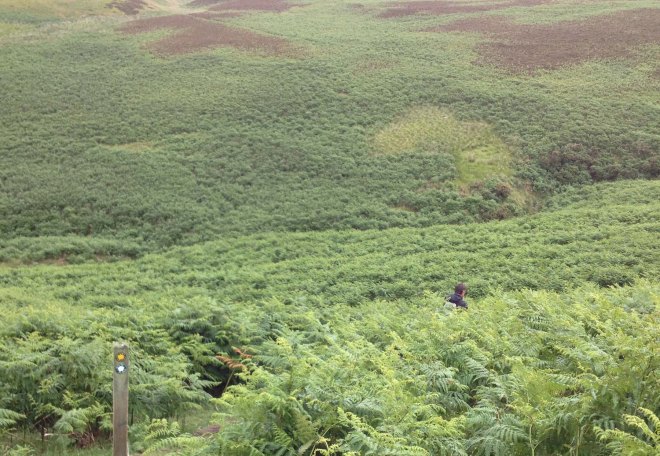 and down … and watched Stephen disappear into that forest of bracken … 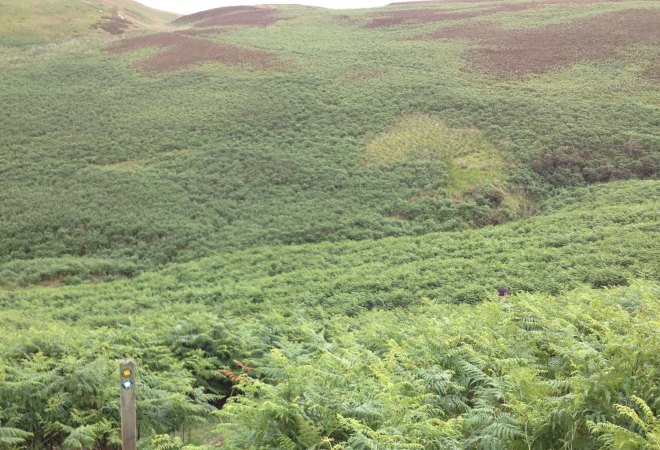 Then it was only onwards and upwards to the top!

Our spirits (well, mine especially) soared as we passed another waymarker …

A harsh reminder placed by a fellow walker perhaps …? 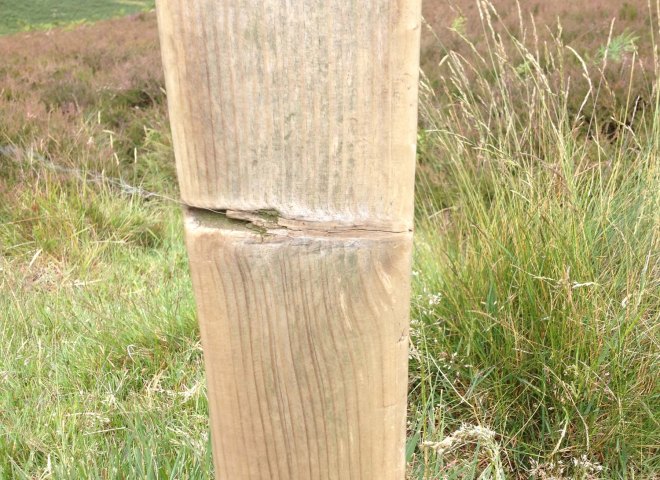 Through the gates of the Yeavering Bell hillfort …

It is perhaps easier to take in the massive scale of this Iron Age hillfort (constructed about 500BC) and its remaining defences, if you look back on the stone wall surrounding the summit and the gate through which we had just passed. 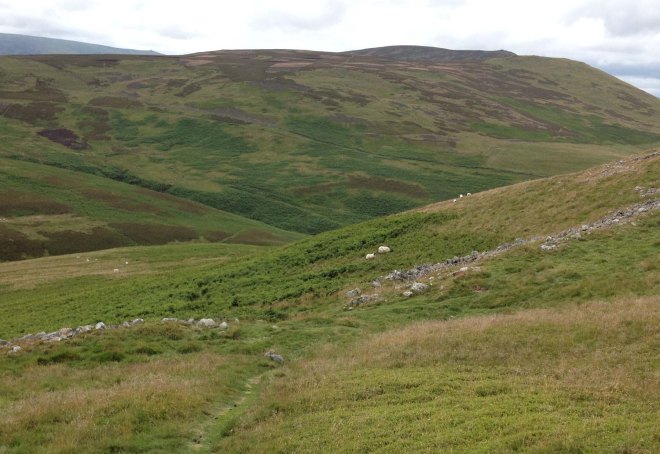 This wall – once over three metres thick and two-and-a-half metres high – still surrounds the iron age hillfort which was at one time peopled with over 130 stone hut circles.  The imagined illustration inside our leaflet (image on right below) gives an idea of what life was like in the fort. The aerial shot on the left  shows the wall as it is now. 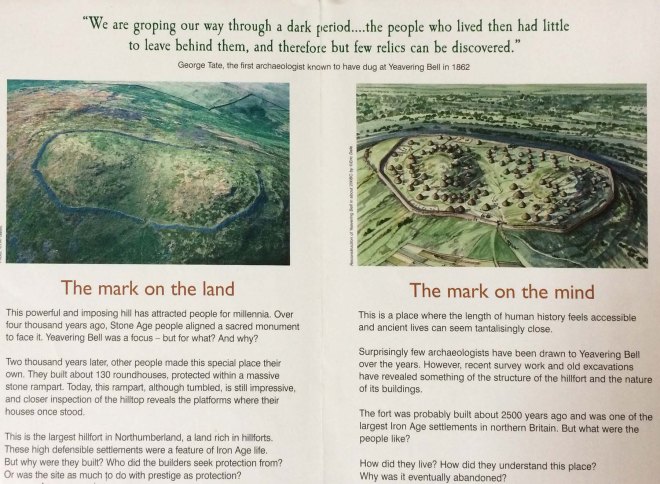 So many questions about this hill fort and the people who lived there. Despite excavations of the site we still know very little. But what we do know is that it is jaw-droppingly extraordinarily amazing there.

Back to our climb. We were nearly at the top.

Wow! did it feel good to finally get there! Top of the world is the only thing to say here!

It wasn’t Sunday and we weren’t on Bredon Hill but otherwise Housman had it just about right:

Here of a Sunday morning
My love and I would lie,
And see the coloured counties,
And hear the larks so high
About us in the sky. 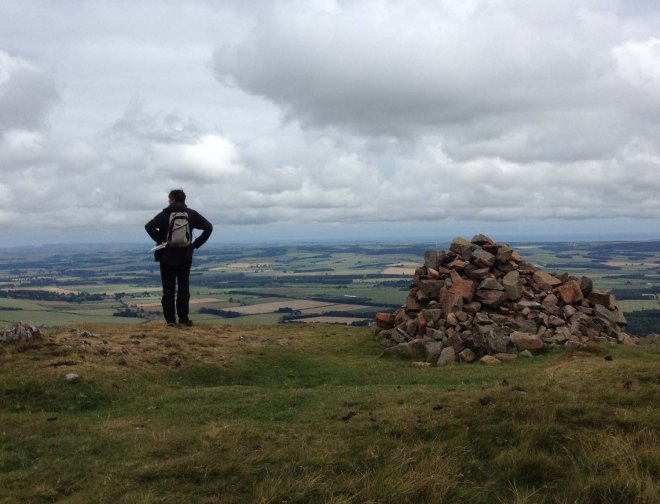 That’s Scotland glimpsed on the northern side …

Craning our necks just a little bit further to the east, we can see our car ( a tiny white blob) far far down at the bottom of the hill …

More importantly we can see – right in the very centre of this photograph above – the honey-coloured field of Ad Gefrin from where Yeavering Bell acquired its name. It is Old Welsh and means the Hill of the Goats.

In the 7th century there was a township in this very field, and it would have been busy, busy, busy. Just as – in a still earlier age – the Iron Age hillfort on the top of Yeavering Bell would have been a populated and active village. 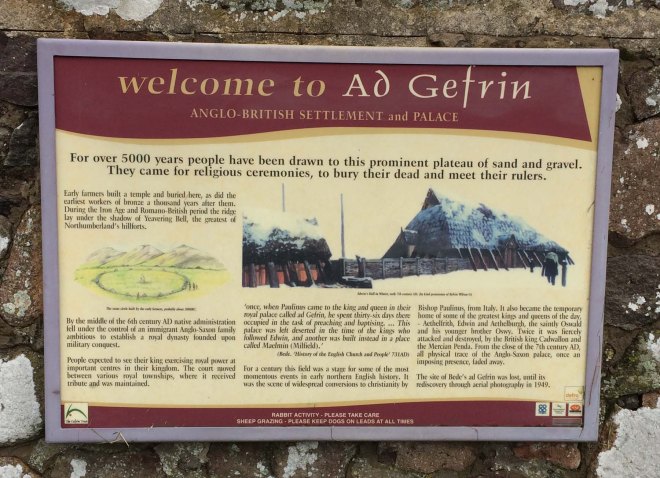 It is truly the hugest stretch of the imagination to think of these wild empty places like this, but the Ad Gefrin trust have put up useful information boards and have a website to help tell the story.  Perhaps most effectively of all, they tried to show by mowing shapes on this field the size of the buildings that were once here.

Back to July 2017, and we were struggling to find the steep path down the face of Yeavering Bell.

Eventually Stephen found the track, and we headed down to the stone wall enclosure. 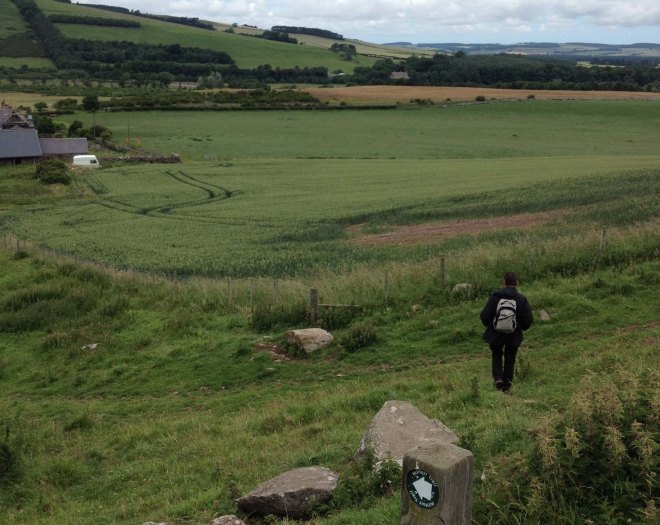 But on the way down we saw the wild goats after whom the hill is named! Not a brilliant photograph as they beat a hasty retreat when they saw us, but we were thrilled to see them.  They are completely wild, have been here for centuries and are hefted to their life on this hill.

Time to say goodbye to these remarkable places, but I don’t think it’ll be long before we’ll be walking here again. 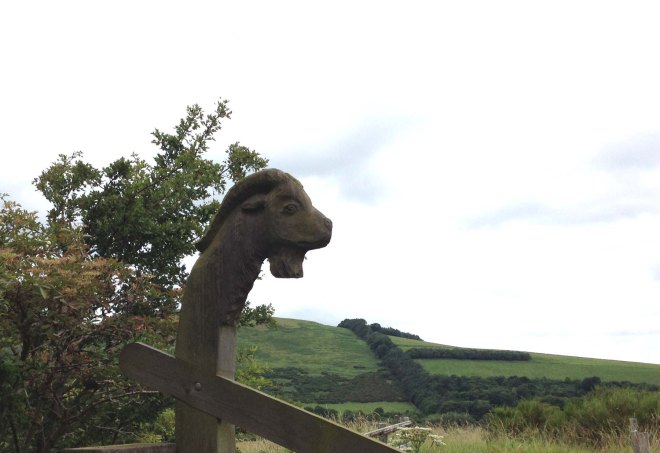