It’s a very damp overcast day as I write this,  so it’s hard to remember what glorious weather it was when we were out on the Simonside Hills last week. It brings most sharply to mind how lucky we are to have photographs to preserve our memories.

It’s a particular pleasure for me to do these walks (which I think is well-conveyed by our Simonside photos) because as a child I was never encouraged to embark on “proper” walks.  These were seen as my father’s preserve. Here he is on Dartmoor in the early 1970s, and, my goodness, did he equip himself thoroughly for his walk!!  I now have the binoculars which he was wearing round his neck in their fine leather case, and even without the leather case they are very heavy to walk with indeed.

While my father marched over the moors, we children were left with my mother and grandmother for (usually) damp picnics under the rocks of Hound Tor.

So I grew up believing I could never be a hill walker.  What a joy it has been to discover in Northumberland that this is not the case!

Our walk last Tuesday took us up the Simonside Hills. They are near Rothbury, about an hour’s drive away from where we live.  We started our walk at the Lordenshaws carpark, with a helpful noticeboard and the path stretching on and up into the hills.

It was a day of brilliant sun, barely any breeze at the start – and hardly any other walkers either.  The flora was abundant and beautiful. 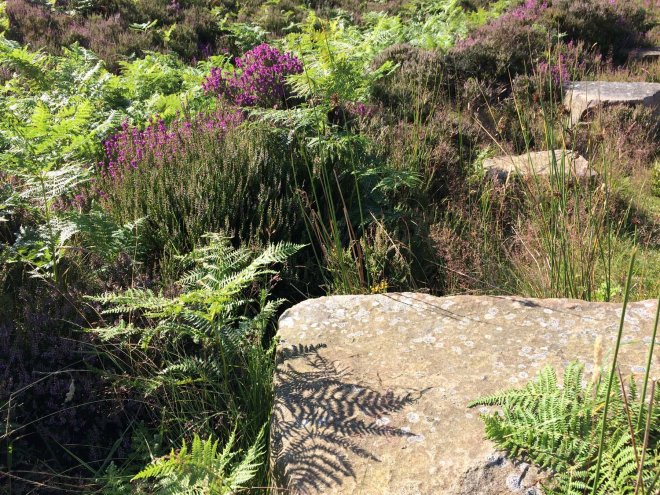 But what struck me most forcefully right at the beginning of the walk and further as we walked along the summit of the Simonside ridge was how managed the path was. Just look at these carefully constructed stepping stones! 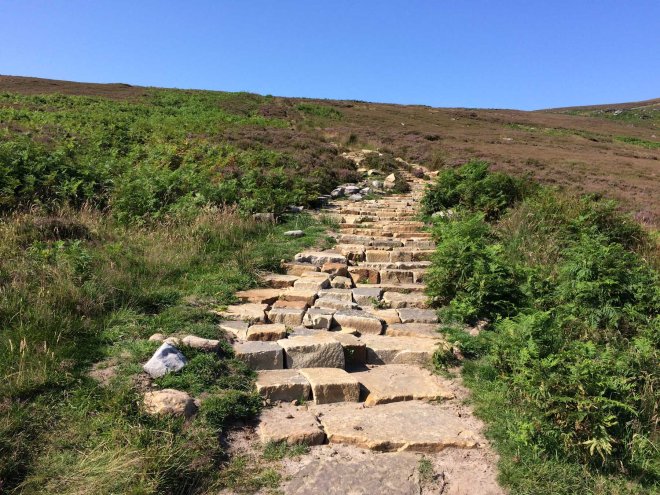 I guess this shows how inexperienced I am with hill walking.  The Simonside Hills, not far from Rothbury and the more populated south of Northumberland, are heavily walked – and quite rightly so, because they are a magnificent walk.  But walkers (and this, of course, included us) wear away the paths they love to walk.  Where the path hasn’t been laid with slabs and steps, it was heavily eroded and very uncomfortable walking – the elements must bear some responsibility here! 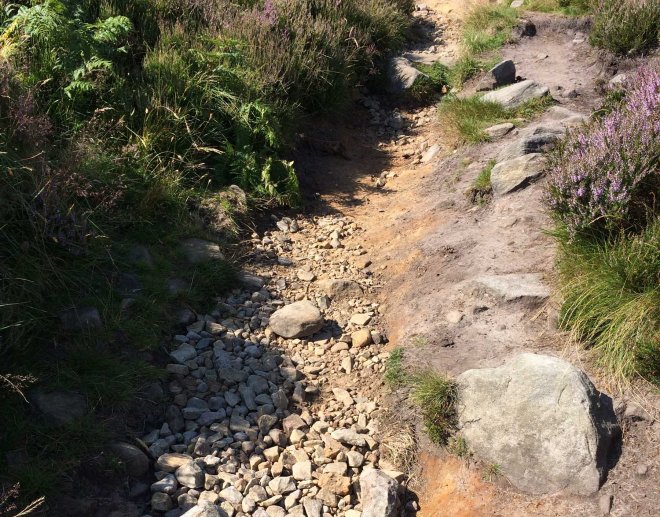 Further on the path was slabbed – much more comfortable walking.

We laughed to see that some of these flagstones bore evidence of a former life – can you see the metal marks on this flagstone?  In some places there were metal protuberances still well-proud of the stone …. hmm, what happened to Health & Safety we wondered … ?  They did look a bit like re-used gravestones, and I half-expected that if you turned one over you would find names and dates.

Touchingly, a flag stone remembers Dr Alan Reece. So many greats to attach to his name.  A fine place to be remembered.

On the path went … 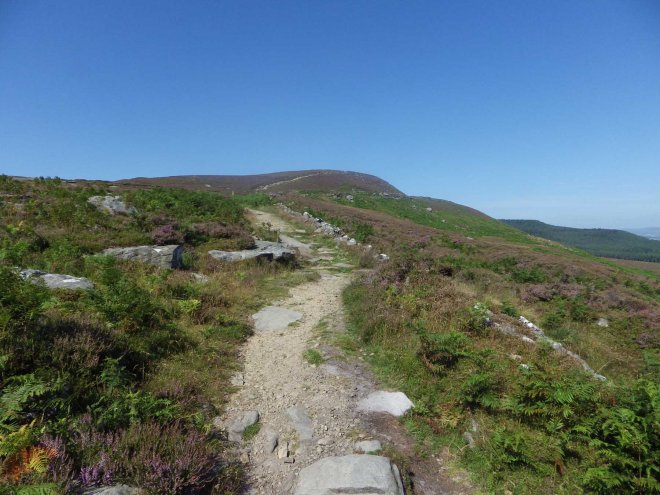 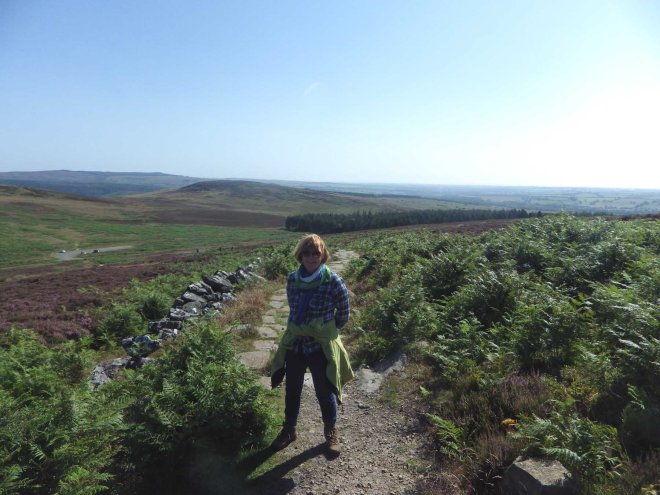 (Later on we met this helpful sign explaining all.)

Before long we’d reached the first marker, the Beacon Cairn. 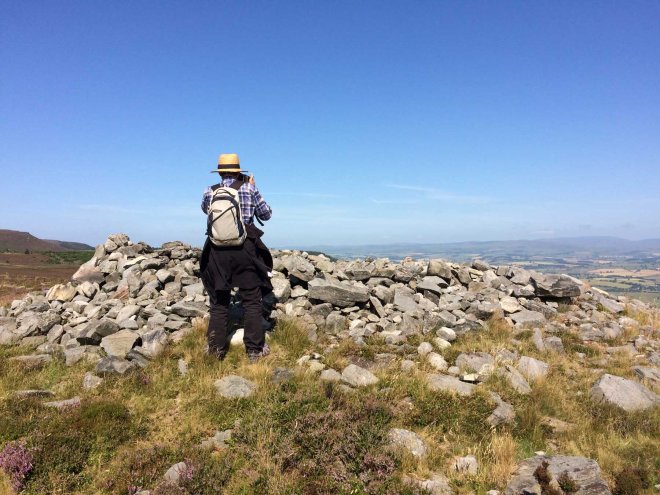 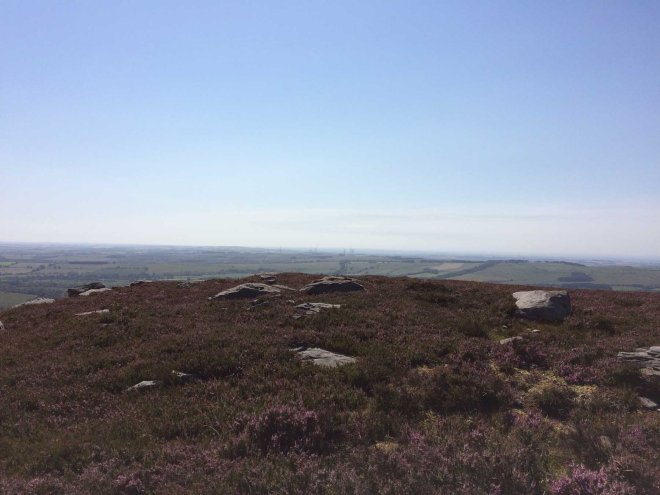 And back to Rothbury. 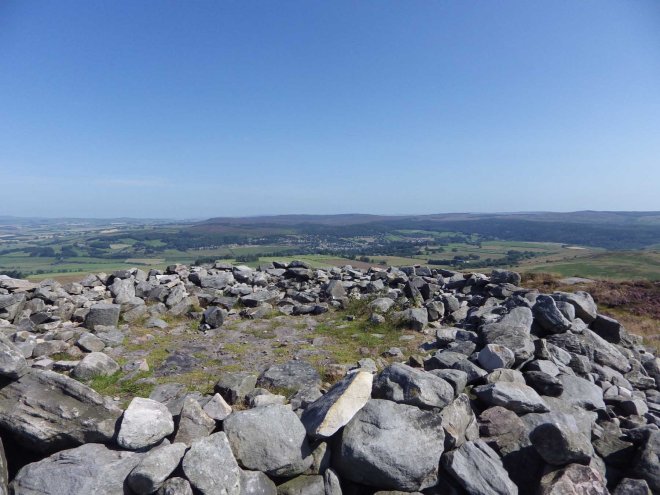 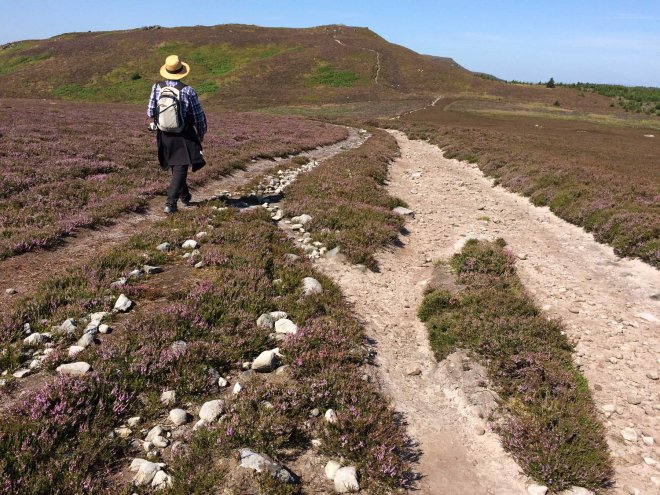 And the start of the climb to Dove Crag …

Glorious walking through the heather – not quite at its best yet but heavy with bees …. 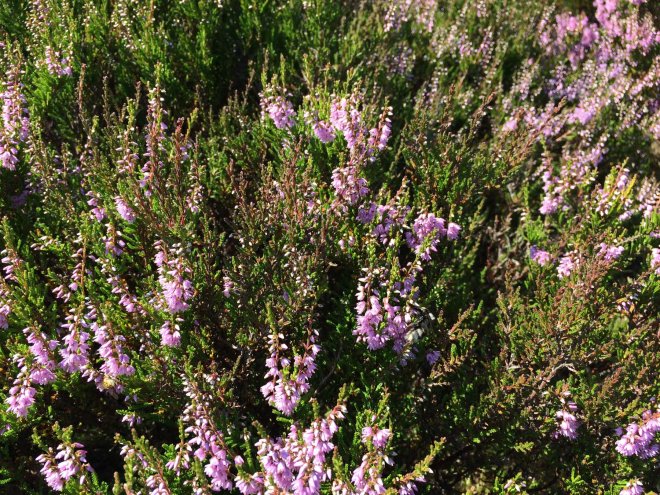 And whortleberry sustenance! (actually known as bilberries in this part of the world.  Whortleberry is its Devonian name). 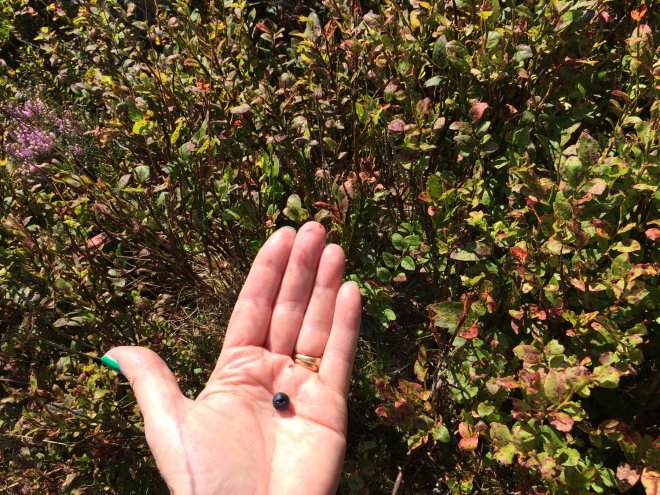 Stephen following me (quite a way behind!) at this point, so I’m feeling a bit smug …

Bit off a show-off really … 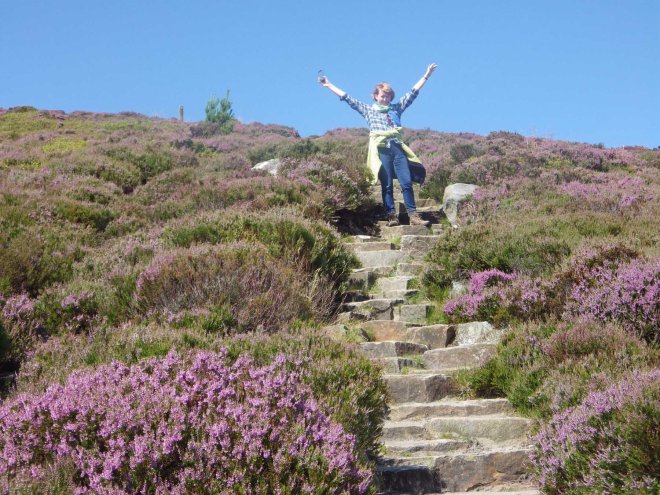 To Dove Crag and more sustenance …. 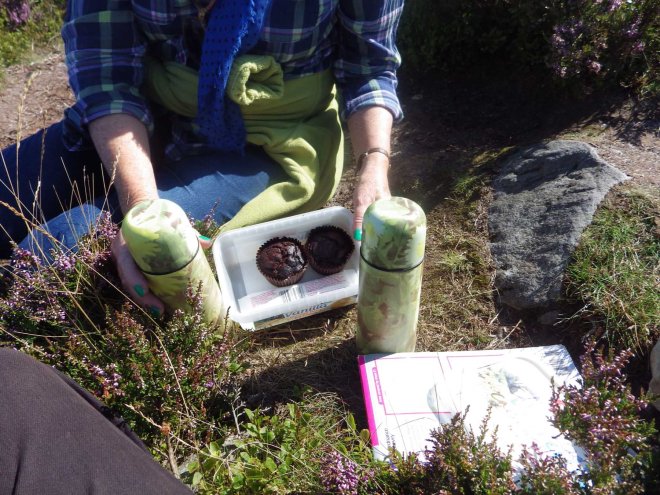 And, oh the views!

Accompanied by a glorious sense of well-being!

Further on and further up (as the children exclaimed at the end of C.S.Lewis’s Last Battle) …

At one point you are redirected onto a completely different path – you can see the old path veering away to the right behind the fencing, and the blue notice explaining that this is because of erosion control.

A colour change as we passed through red grasses …

With the odd curious conifer standing in striking contrast.  We met several of these conifers on our way – presumably seeded by the birds from the large conifer plantations at the foot of the Simonside ridge. 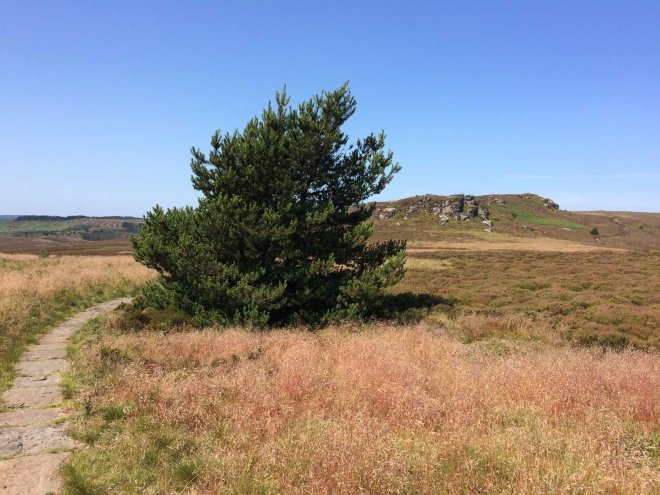 On and up again to the highest point …

The colours are amazing! #nofilter 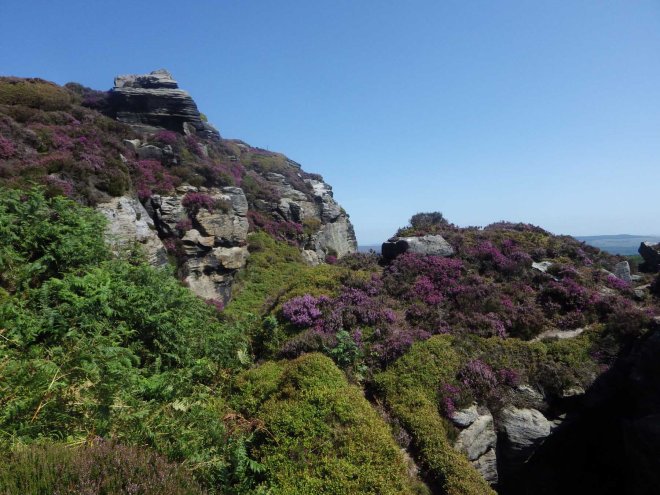 Then just a little way ahead to the final cairn – which seems curiously suburban garden to me … Isn’t this the effect rock-gardeners strive to create? 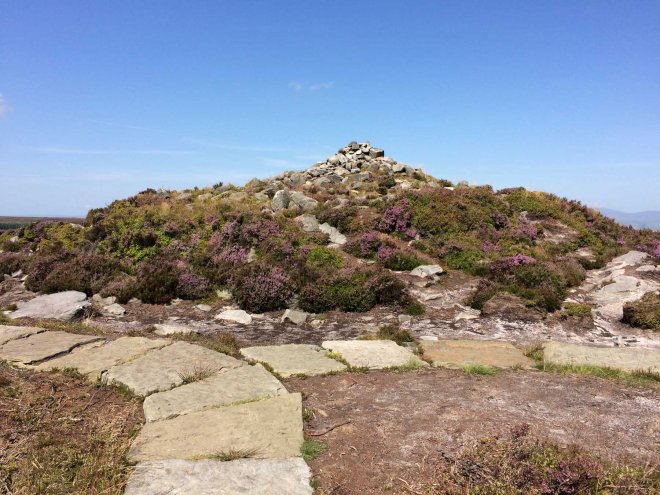 And the path curves round to the final crag … 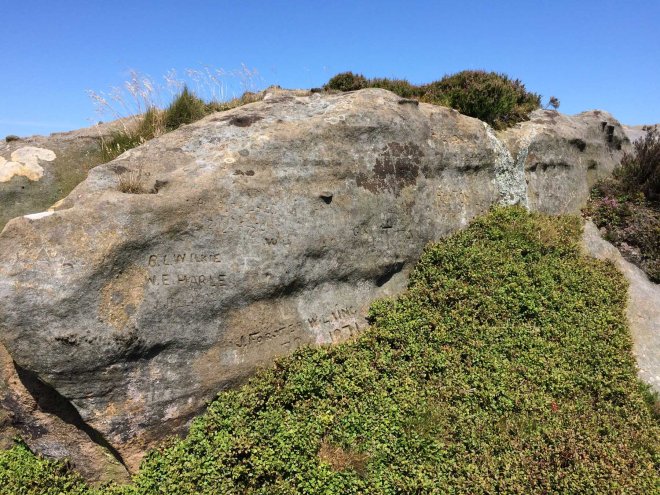 But we just climbed up to enjoy the view …

What caught me unawares was this huge leonine stone monster of a crag – yes, that’s what I was standing on above!  Seems almost an imposition for such a fine beast.  Curiously nowhere have I read about this wonderful stone shape. One can imagine the stories of the Simonside beast loose and roaming the hills ….

And with that our route took us back, retracing our steps …

Well, not quite – there was a small diversion. Stephen had found the proposal stone …

To our surprise no path led the way to the Proposal Stone over the heather – do so few people visit it now?  You have to break all the National Park rules and climb through the heather to get to it.

We had a bit of banter because I too am a K …”So who was this J?” my Stephen demanded, and then …. magically we connected to the app and Simon Armitage’s poem about this place. 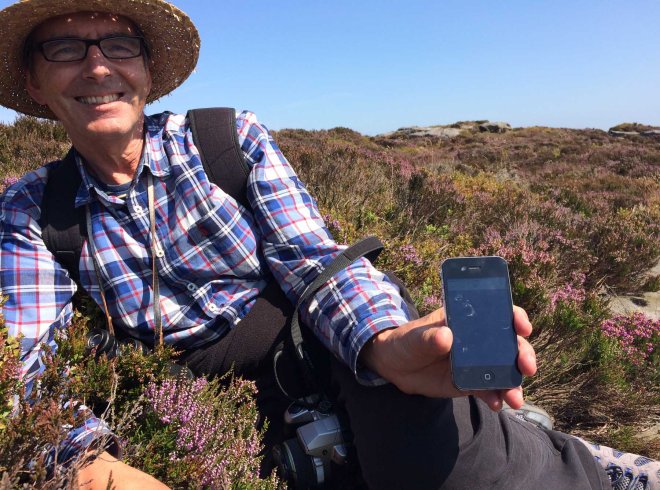 The poem isn’t written down, so the only way to hear it is to climb the Simonside hills with a smart phone.  Disappointingly neither of us can remember much of the poem – just odd words and phrases stand out: the Taj Mahal of this empty space, the heather, the bilberries and the cotton grass – all as bridal accompaniments. Despite our failing memories, it was a rare and remarkable experience to hear the poem spoken in this place like that. Thank you so very much Mr Armitage and technicians of the Northumbrian National Park.

What a place for a proposal!  Did she say yes?  Nobody knows.  In fact, nobody knows who put the proposal either – or when.

(Although you can’t hear the poem, you can listen to Simon Armitage speak beautifully about this project here.) 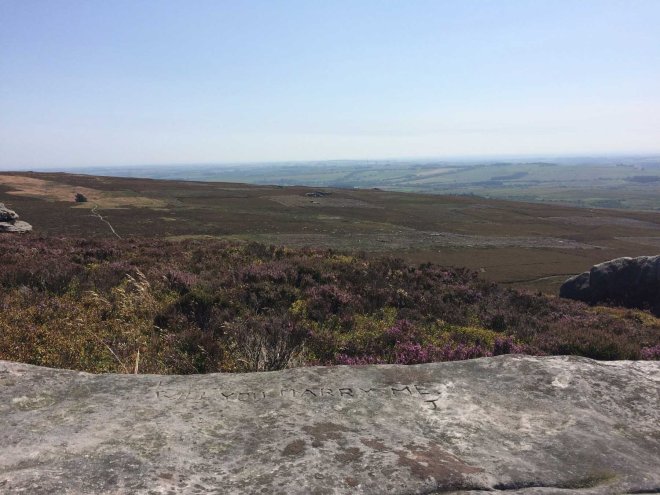 17 thoughts on “A walk on the Simonside hills”