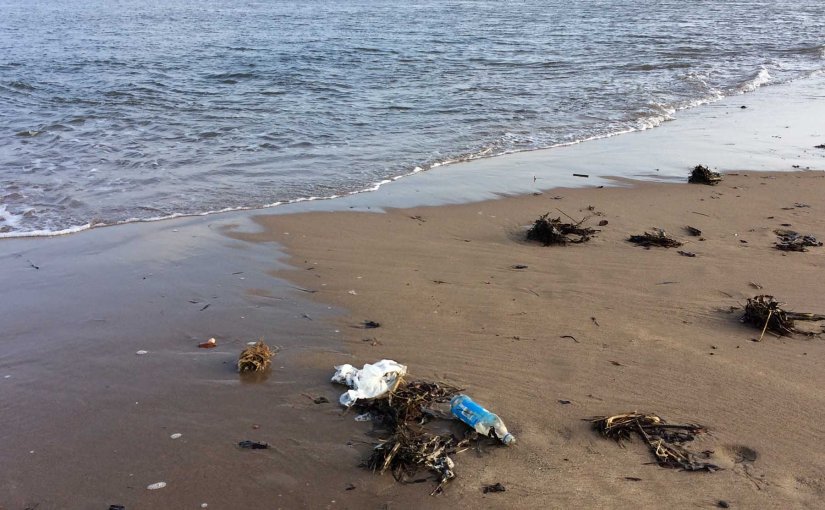 I’ve been meaning to write about the litter that we see in our locality for several years, but everytime I started it got pushed out of the way by another topic.  As a result what started as a gut-reaction to the rubbish pollution we saw on the beach sort of took off.  And I started looking for rubbish – and found it all too easily – everywhere (actually I  know I became a little obsessed with looking for it).  Our cities are full of it. Nobody seems to think twice about leaving empty food and drink packaging around, even in the most iconic places – here captured at the impressive Scotsman Steps, just off Edinburgh’s Waverley Station. 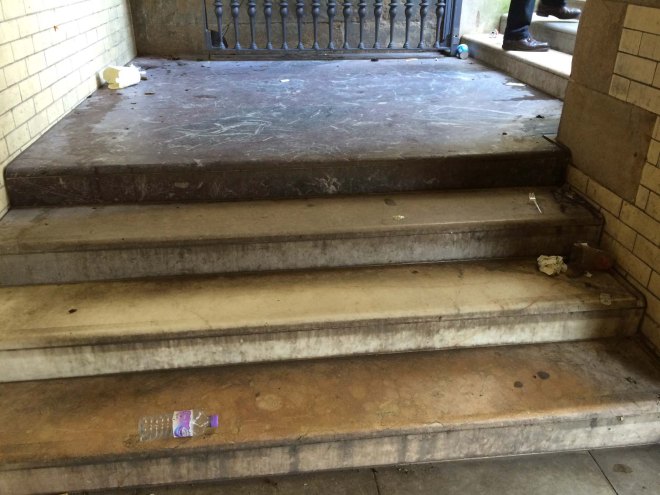 I suspect everybody is all to well acquainted with this sort of sight – a  casual disposal of something that one shouldn’t have had in the first place – here seen along beside one of the roads into Edinburgh.

I could go on and on – but there’s no need, because all of us are just too familiar with these sights.  Come back to Spittal then, and our home beach and local paths and what do we find? Take the tracks leading to the beach …

There is a favoured spot for parked cars on the sea-cliffs above the beach. Such a fine view. Young and old, we regularly see people sitting in their cars here, eating takeaways, smoking (no comment on what exactly they’re smoking).  And then they drive off and leave mess like this – bottles, food packaging, toilet roll, plastic bags.  Just horrible – and I cannot understand it, because what is the problem with putting all this detritus in a plastic bag and driving with it just a couple of hundred yards or so to the council rubbish bin?  Or – how about taking it home with you – it’s not going to foul your car if it’s in a carrier bag?

That photograph was taken during Spittal’s Seaside Festival in August this year (you can see the marquee and the entertainments behind on the promenade) so perhaps one could excuse festival visitors who don’t know the area well … (I’m making every effort to be charitable here) but actually such a picture is not the exception – it is more or less the rule. Almost every time we walk past this spot, we see sights like this .. 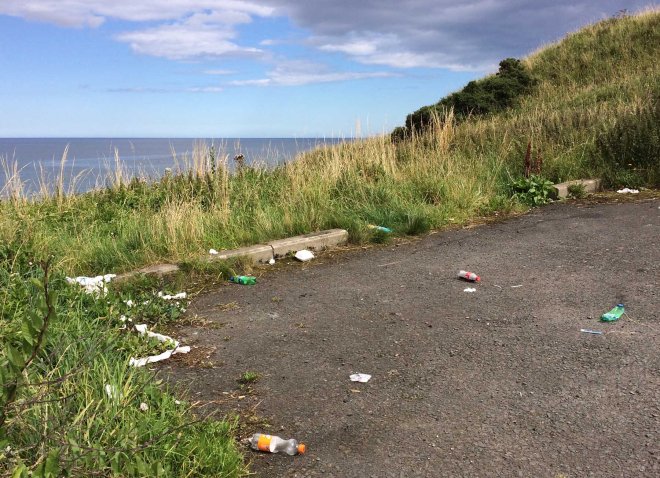 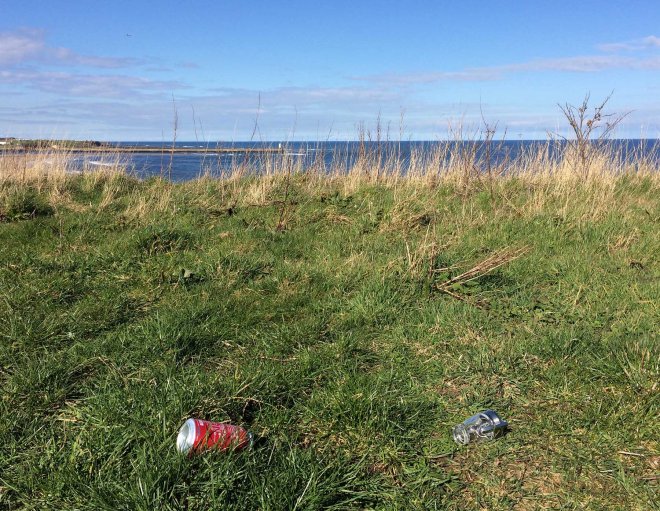 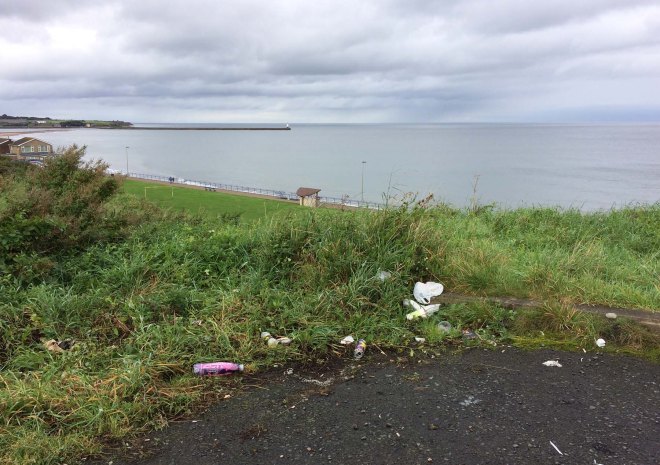 Council workers and locals pick up this rubbish here – we have met them and shared their irritation.  Nowadays we arm ourselves with disposable gloves and large plastic bags before we set out from the house.  Disposable gloves, I hear you say?  Well, yes, because another horrible aspect of the rubbish we find ditched in the locality is dog poo bags … 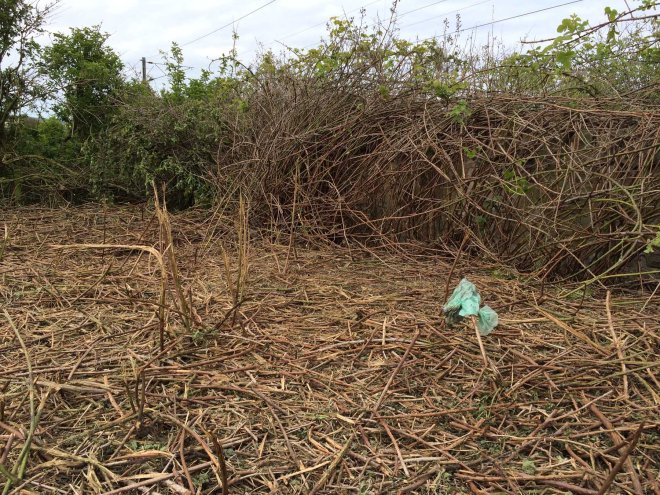 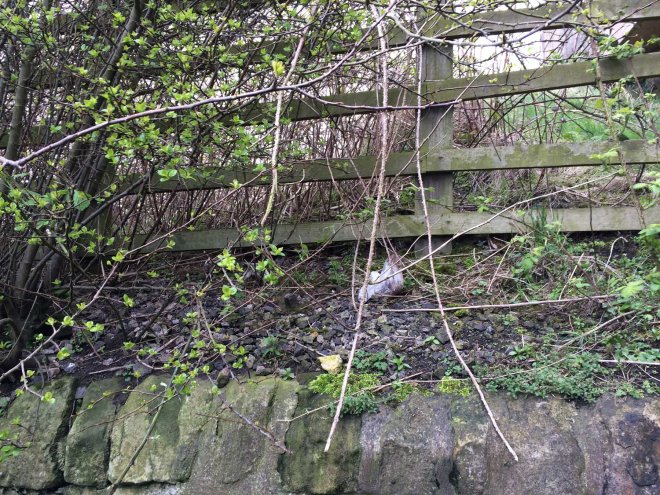 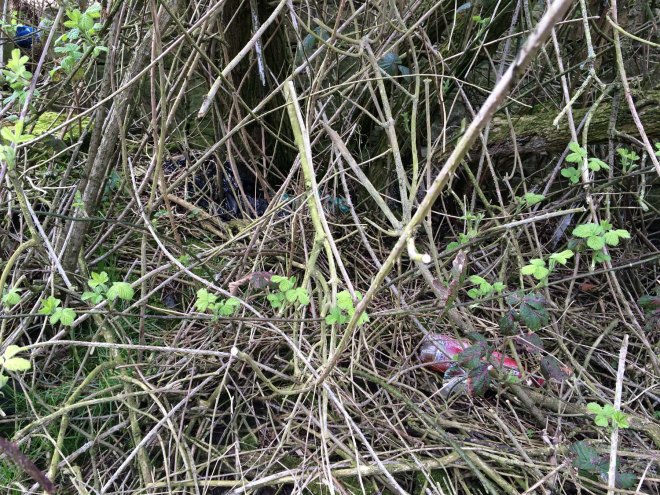 Look carefully in the lower picture, and you will see several nasty little packages lurking right at the back of the undergrowth.

No words.  There just are no words.  It’s so unpleasant.

I’m going to be charitable with the dog poo glimpsed in this beach picture, because I’m assuming these carefully places little pink packages were waiting for somebody to deal with after their walk … 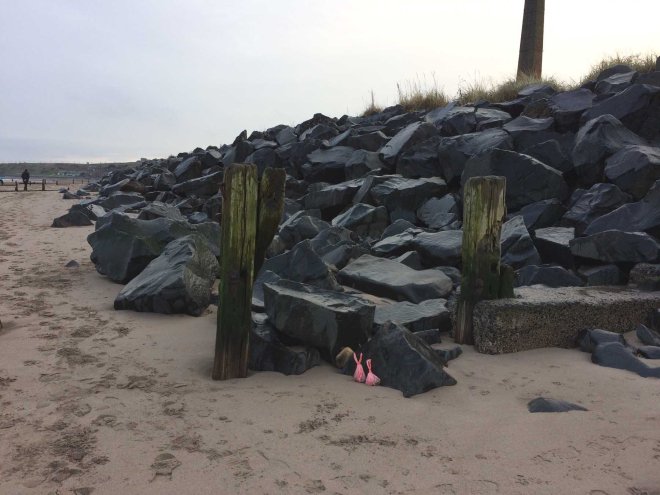 Of course, all of this – unpleasant as it is – is just a sideline to my real beef: the rubbish on the beach. Here there is rubbish – and rubbish.  There are days when the beach is littered with leaves washed down the neighbouring river Tweed … 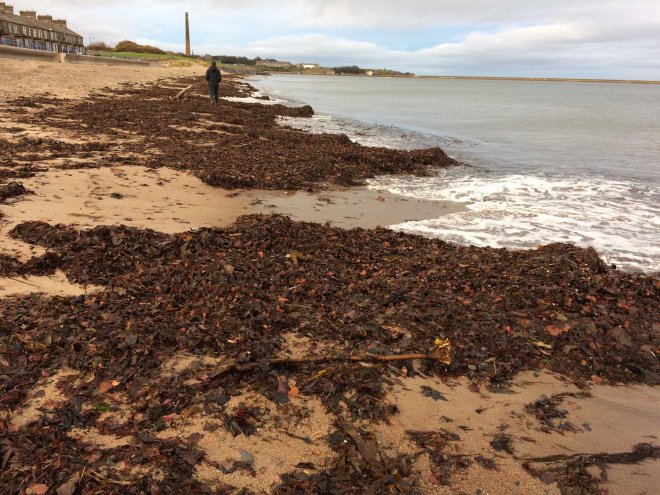 They make magnificent compost, so we (and others) can be glimpsed regularly bagging up goodies to take home … 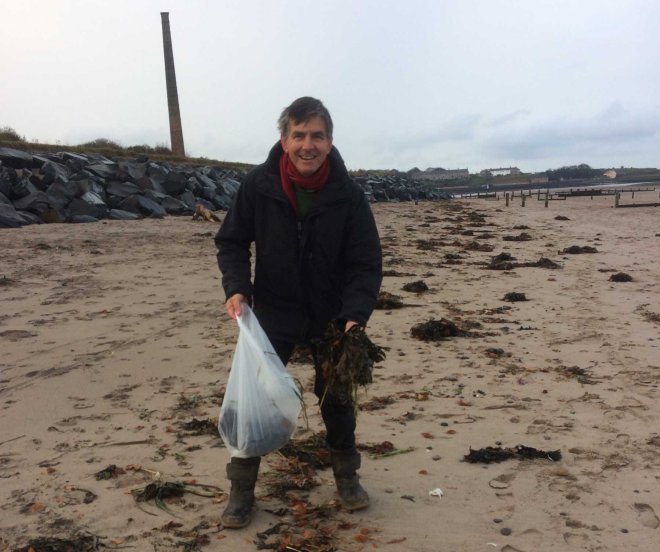 Compost, of course, is the operative word here.  Mostly what we see on our local beach looks more like the coloured pieces here and does not decompose … 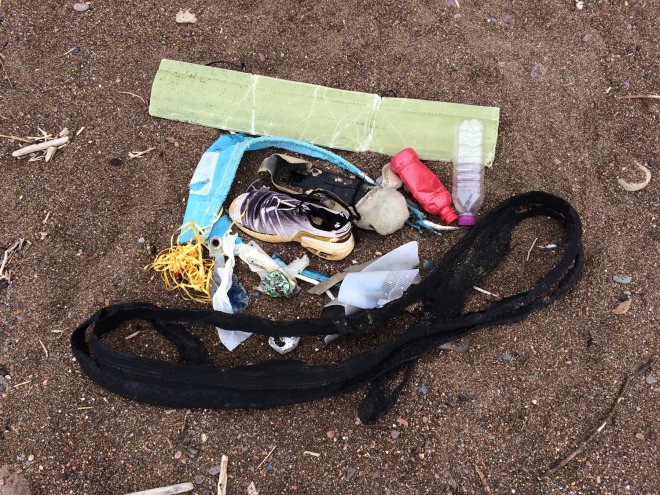 Yup. Bottles and plastic.  And we all now know where this is going. According to an article in the Times newspaper a year ago close to 36 million plastic bottles are used and discarded daily.  Of those almost 16 million are not recycled.  Some will go to landfill, some will just get ditched on beaches and in the countryside. A plastic bottle ditched on the beach will erode, battered by the winds and the waves, until you get a sort of plastic flower like this … 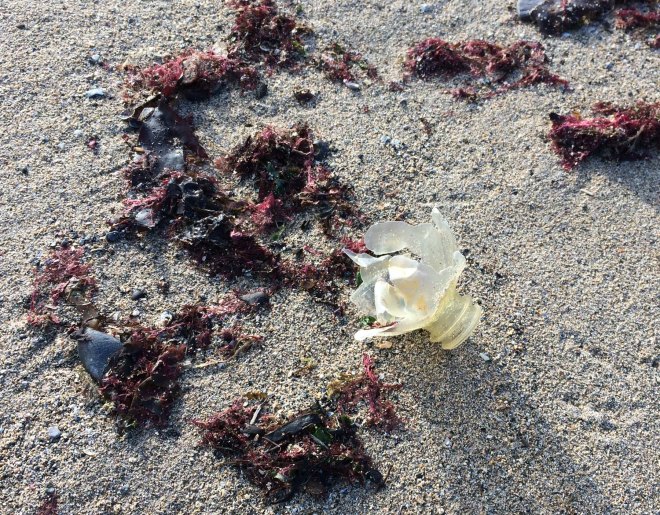 There’s a terrible sadness in that beautiful flower because the missing plastic bottle erodes into smaller and smaller particles of plastic.  Eventually they are small enough to be ingested by fish and other marine life.  Recently I read that microplastics are so pervasive in the environment that you are hard put to find sea-salt that does not contain tiny particles of plastic.

Other materials eventually degrade.  Curiously we found old car parts on the beach below Huds Head. 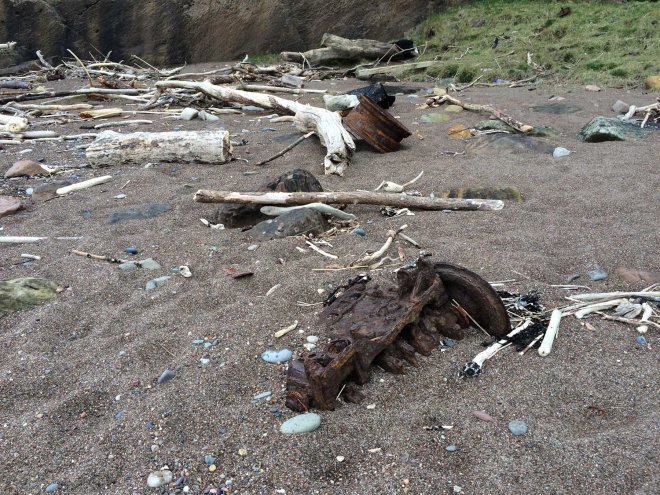 There is a sort of sculptural fantasy in these rusty pieces … (coupled with the reassurance that they will eventually degrade – not that I’m recommending the disposal of old cars off the cliffs!) 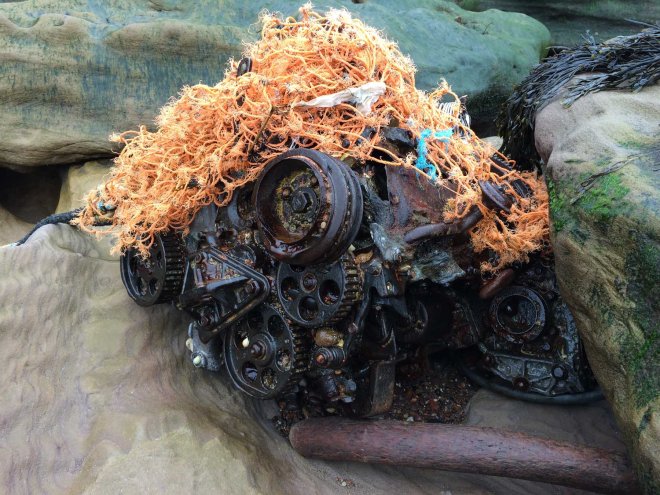 All this littering is just awful – it’s ugly, it’s wasteful, and it has terrible consequences as the pelleted plastic story demonstrates. Alas, I cannot but blame my baby boomer generation particularly for its cavalier attitude to the abundant materials we have had from this planet.

The grim news is that there’s no magic way to deal with all this plastic pollution.  Of course we can take heart that this sort of behaviour is no longer acceptable … 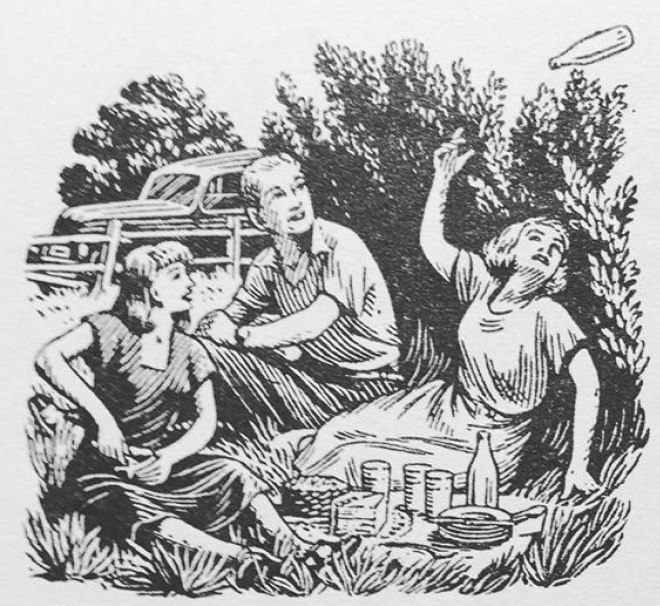 And it is encouraging to see authorities such as Transport Scotland putting out this message on their electronic noticeboard just over the border at Lamberton: Keep roads tidy and take your litter home …. 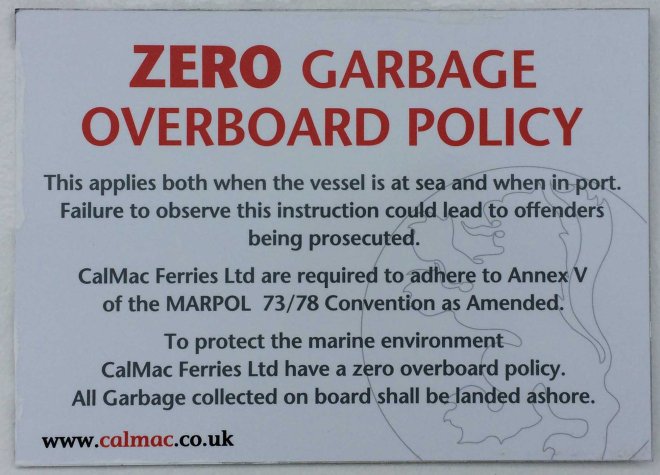 Probably best of all more and more ordinary folk are joining in beach clearances.  We saw this on the beach at Holy Island. It’s jaw-dropping to see what sort of rubbish they’ve collected! Car wheel hubs!  Garments!

I guess too there’s some very small comfort to be taken from the UK Chancellor’s commitment in the Budget earlier this week that he will consult on taxes for throwaway plastic. It’s a very small step in the right direction.

Before I finish this blogpost, I want to acknowledge all those people we see picking up rubbish – on our local beaches as well as in my Instagram feed. (check out #2minutelitterpick). And I also want to apologise for the rant – if you are one of the souls who always picks up your dog’s poo, who loves to sit savouring the view from your car parked above Spittal Beach and never dreams of leaving any rubbish behind – I apologise to you.

As ever artists say it best. I just love the expression of lashing-out rage Pinky MacLure captures in this amazing stained glass lightbox which we saw at the Barony in West Kilbride earlier this summer. She’s called it Landfill Tantrum. She writes:

“The dustmen complained about the used needles poking out of the bin bags. They buried them, along with all the other stuff.We’re overwhelmed by all the buried rubbish, it’s everywhere, it pushes its way back up and it’s killing the ancient birds and beasts.”

(Many thanks to Pinkie for giving me permission to reproduce her image here).