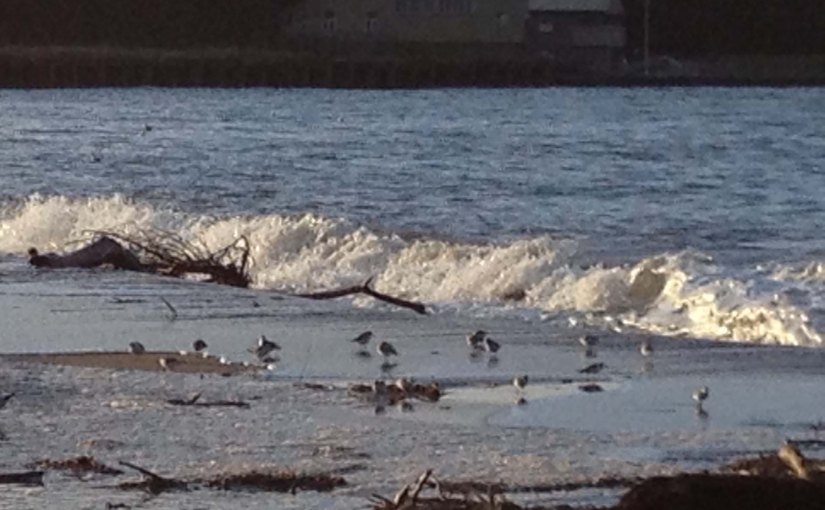 Yesterday we walked from Beadnell to Low Newton (some 3 miles as the crow flies). 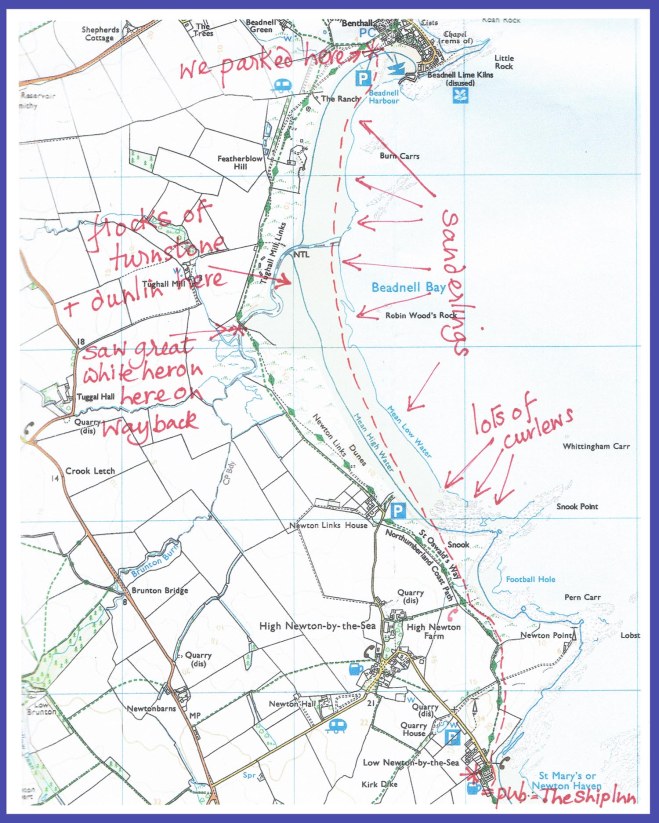 This is a beautiful walk any time of the year.  Yesterday the conditions were just perfect –  no wind, temperature about 5 degrees, tide probably at its lowest.  So we had the huge expanse of Beadnell Bay to ourselves for our walk to the pub at Low Newton. It’s one of the beaches that Northumberland justifiably is so proud of.  Huge expanses of sand and sea and sky.
Best foot forward and looking south to our destination with a glimpse of Dunstanburgh Castle beyond…….. 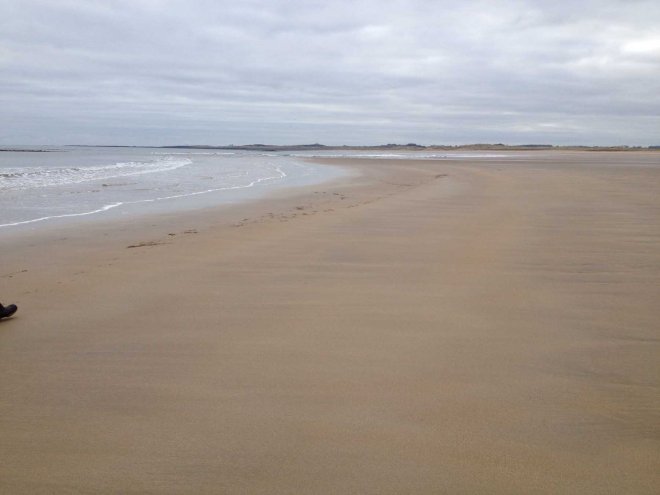 Looking back to Beadnell and its limekilns …….. 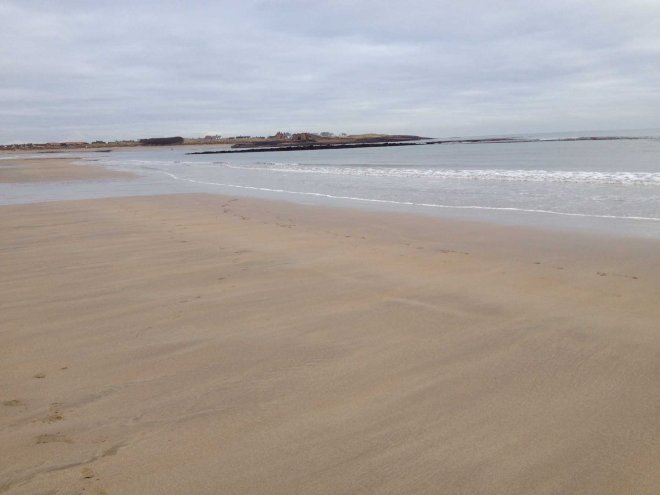 Others had been there before us, but we felt it was ours …… 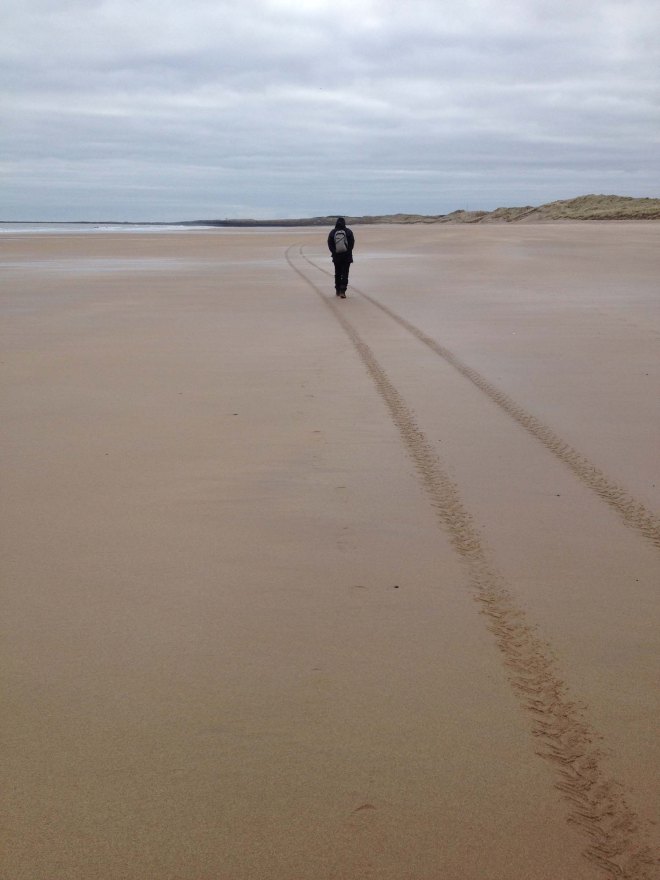 Different sand patterns all along the beach.  These are at the Beadnell end – is the black sand coal (coal fields run along the edge of Northumberland’s coastline) or broken mussel shells? 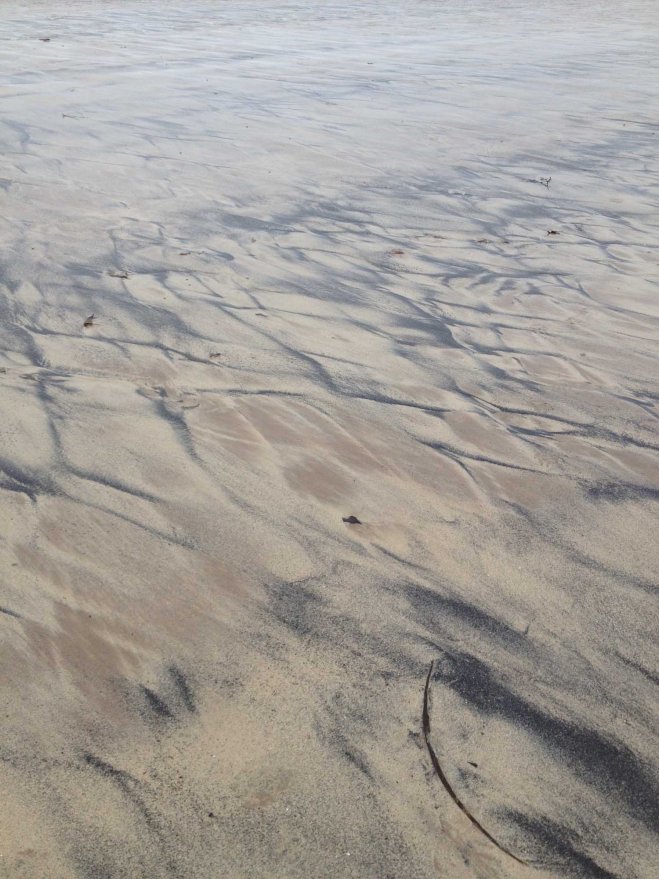 Further along small pebbles and shells make a pointy pattern – it’s as though the beach is wearing a crown ….. 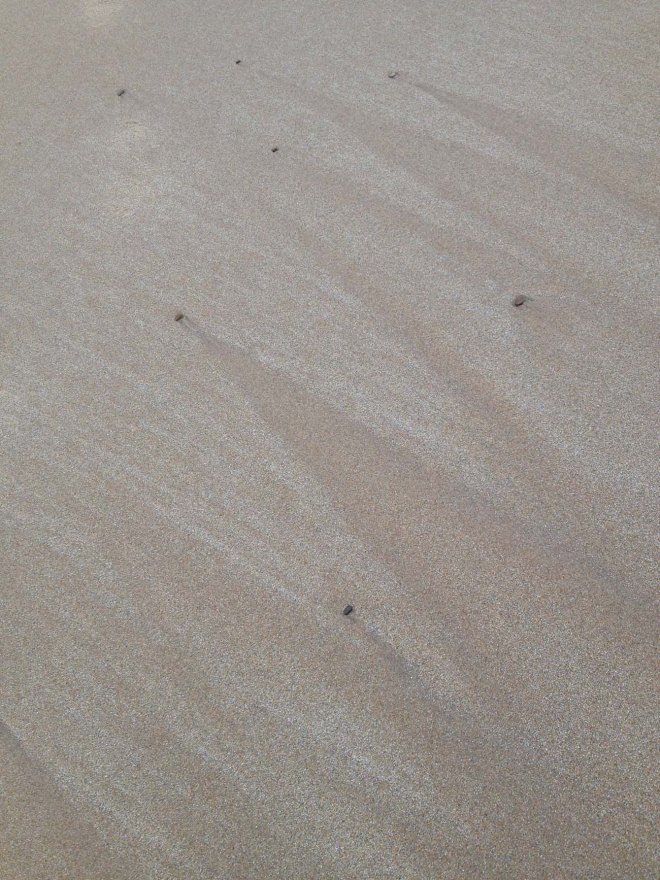 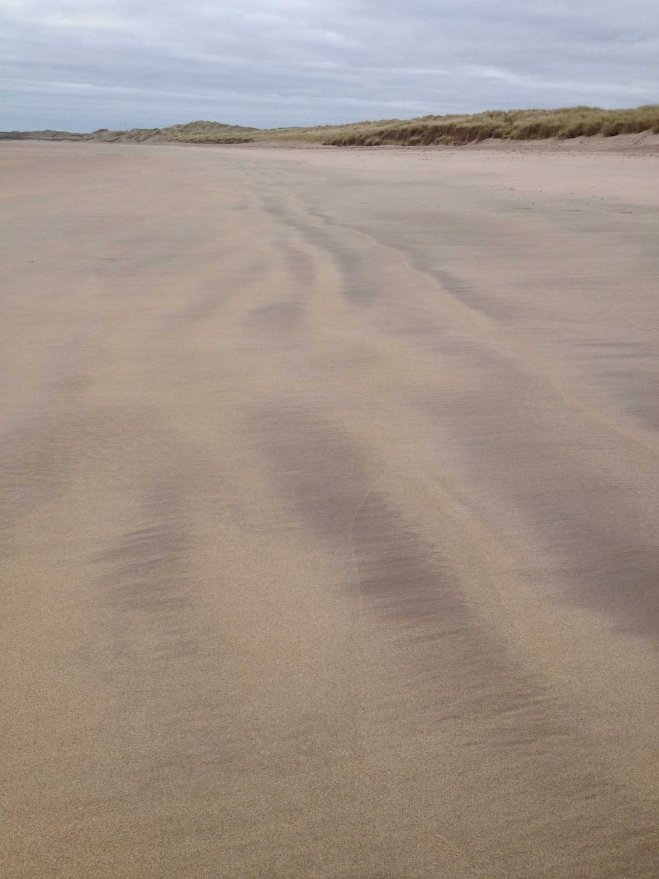 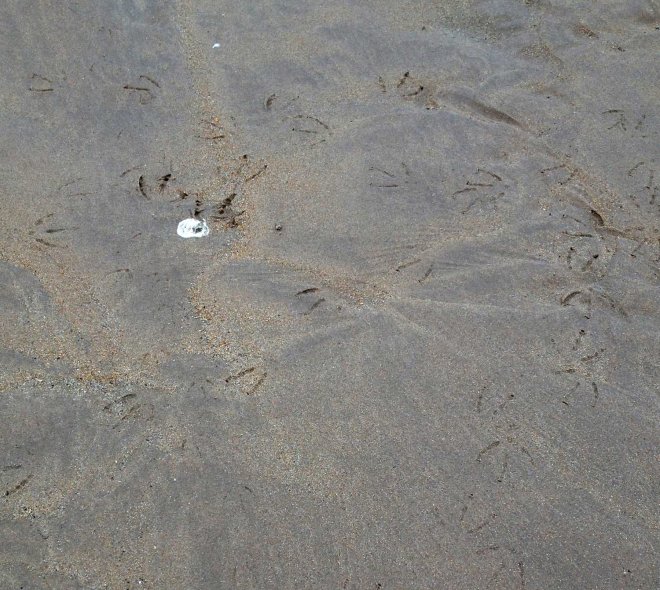 Not really a shelly beach (my favourites) but just enough Banded venus shells to keep me happy. 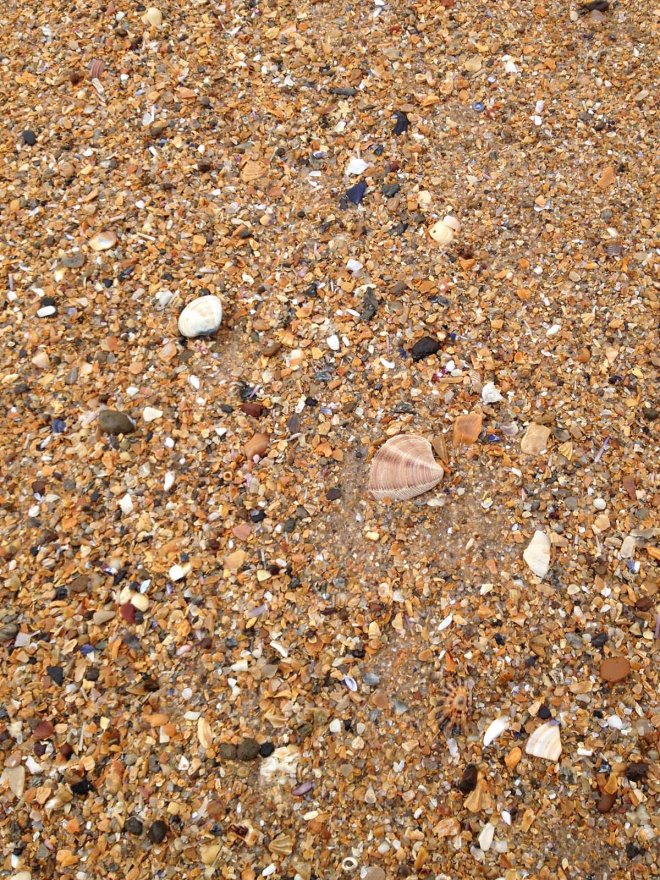 Time for a coffee break.  The retirement thermos comes out (these have to be counted back in carefully since we left one behind on one expedition.  A Hanrahan – as one might say – “I counted them all out and I counted them all back.”  You may have to search recent Falkland Island history to pick up the allusion!) 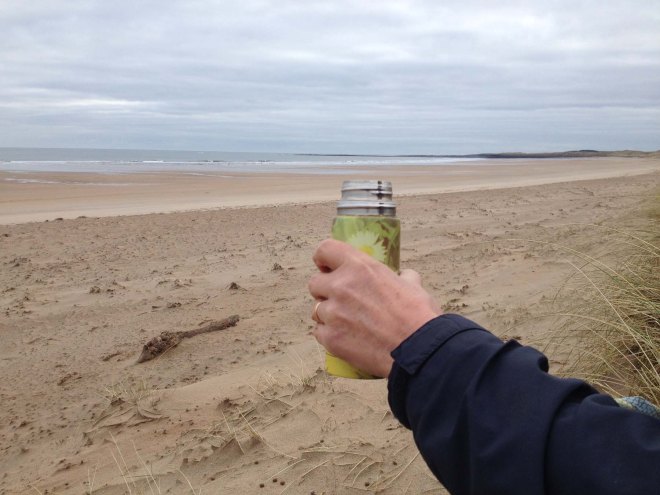 At the end of the bay, we climbed up the dunes for the walk around Football Hole (such a great name!). Looking inland you can just see the snowy Cheviots in the distance, and a reviled wind farm interrupting the view. (There is much ill feeling in Northumberland about wind farms – barely surprising since many have been sited in iconic situations). 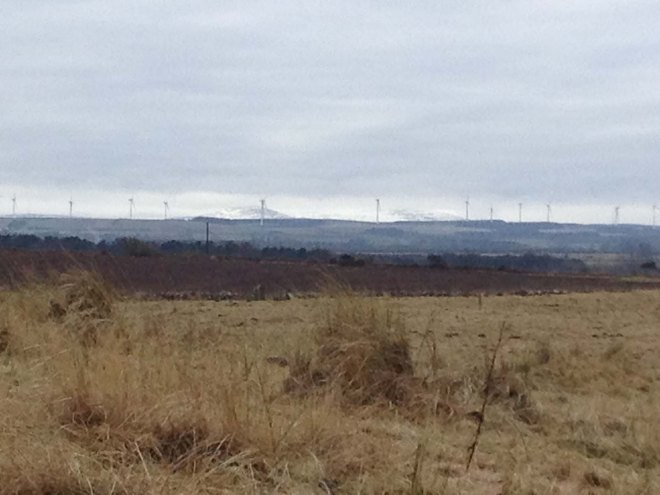 We clambered up a bony protrusion of Whin Sill.  (Whin Sill is the local name for the ignaeous rock dolerite that is so important a feature of the Northumbrian landscape.  The Castles of Bamburgh and Lindisfarne are built on Whin Sill protrusions, and the Romans incorporated it into some of the most dramatic parts of Hadrian’s wall). 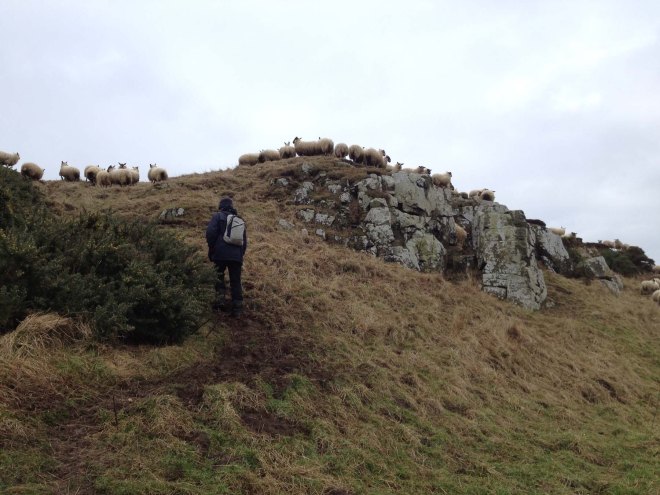 From the top we could now see Dunstanburgh Castle more clearly. 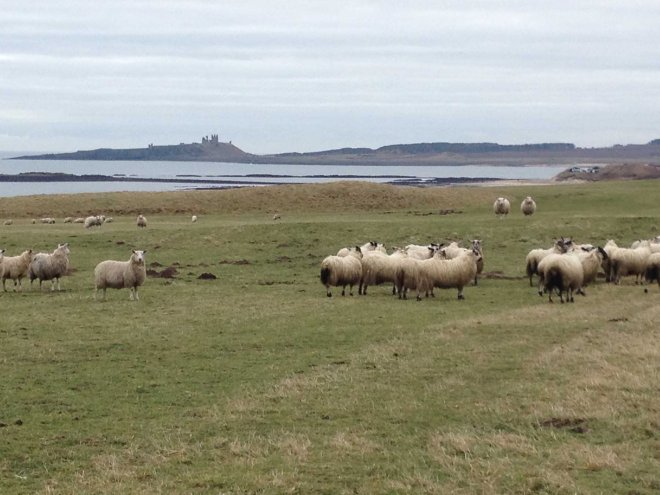 But more importantly, we could also see our destination!  This is the tiny village of Low Newton.  The old fishermen’s cottages are clustered round a green straight up from the beach. 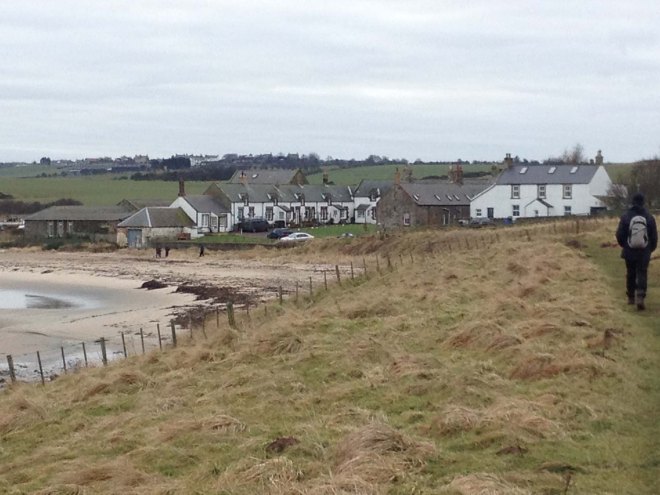 And here is the Ship Inn!  It’s a very popular haunt nowadays – understandably as they have good food and the beer is very fine (they have their own brewery).  As for location – well, it’s to die for, centrally located right on the Northumbrian seashore between Dunstanburgh Castle and Beadnell Bay. 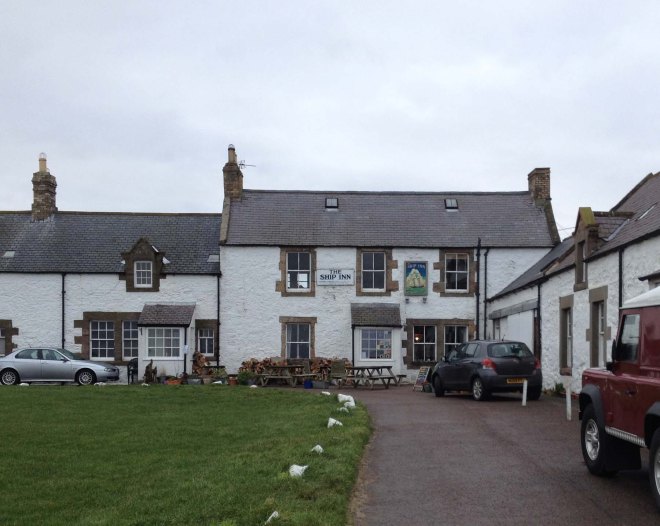 Inside, there’s a fire, and food – and drink!  Perhaps best of all, we’ve timed it just right and the pub is almost empty – we can get seats right next to the fire!  That’s a rarity – it’s a very busy pub. 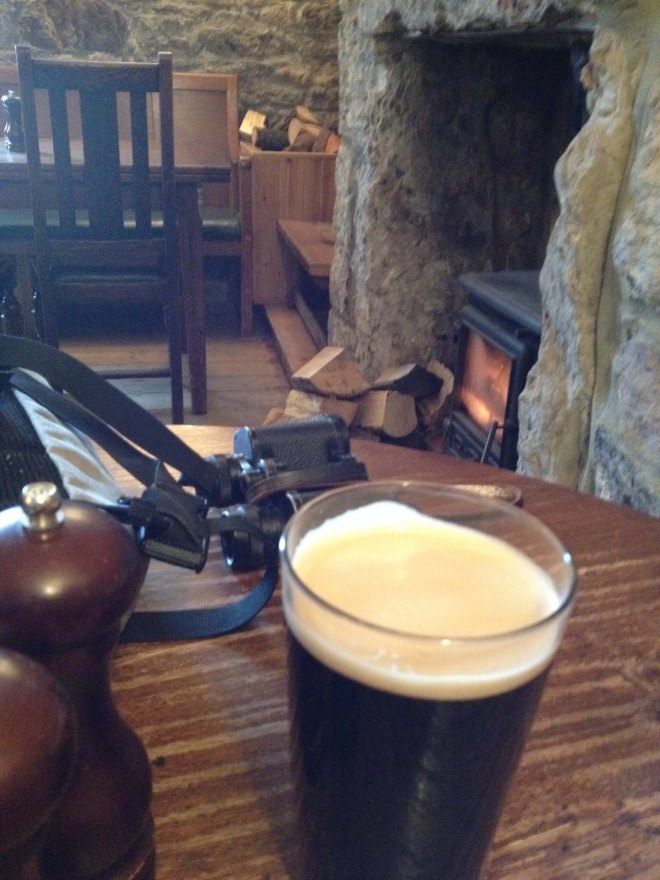 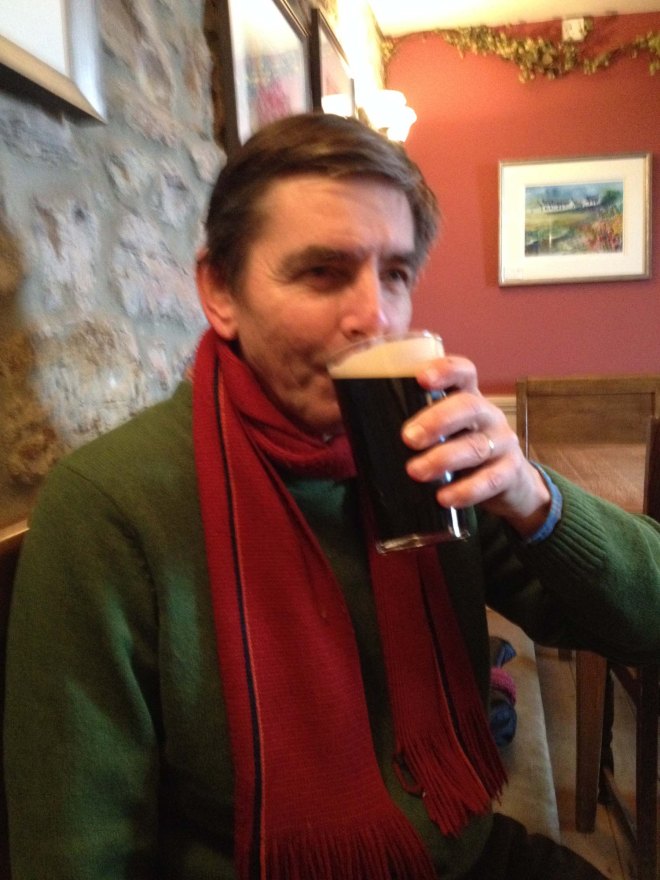 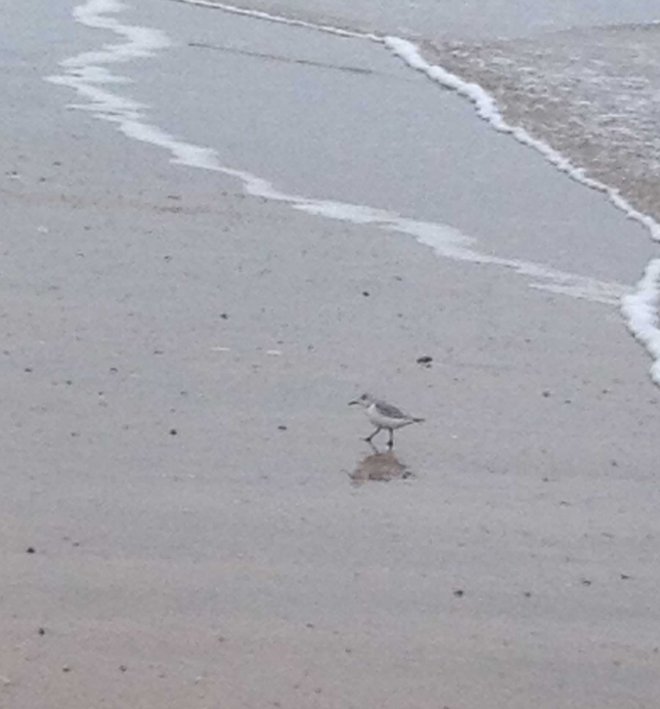 Now I want to explain why these little birds are so very special to us.  We knew nothing of them until we came to live in Northumberland.  When we first saw them on Spittal beach, we were enchanted with their racing and running in and out of the waves.

Derwent May, writing in the Times of January 2011 tells us more about them.  “On long sandy beaches right now you may see small, white wading birds chasing the withdrawing waves.  They pick up tiny creatures that are floating in the water, then run back very fast to avoid the next incoming breaker that threatens to crash over them.  To and fro they sprint, their legs like clockwork.  These sanderlings, little birds of the sand, have a special adaptation for their way of life: they have no hind toe that drags in the sand, so that they can run more quickly.” They are the only bird that has this adaptation.

(Disappointingly, WordPress won’t let me upload my little video which demonstrates this quirky seashore action without ungrading to Premium for £70 – so I’ll just add in some pics from previous Beadnell visits.) 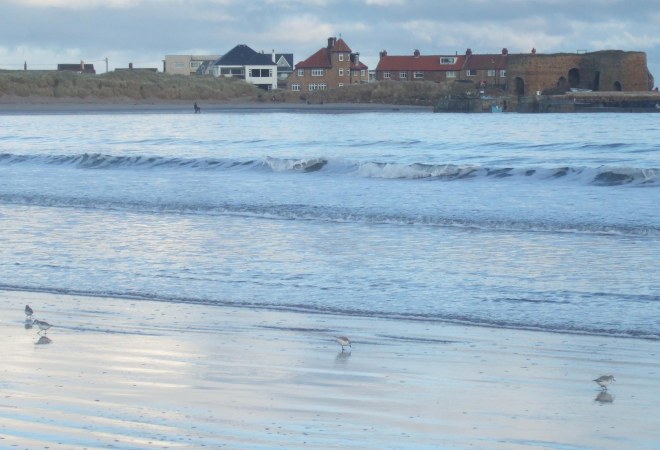 Derwent continues: “They nest in Siberia, very near the North Pole, and some fly as far as South Africa in the autumn.  But a few get no farther than Britain and Ireland, spending the winter here.  They like the sandy beaches … in northeast England …”

Sensible little birds – so do we!  We often see them over winter on our local Spittal beaches, but this year I haven’t seen any yet.   You have to catch them at the right time on the tide – food is most plentiful when the tide is very low.

(Here they are at the mouth of the Tweed with the Berwick lifeboat station in the background, photographed in January 2013). 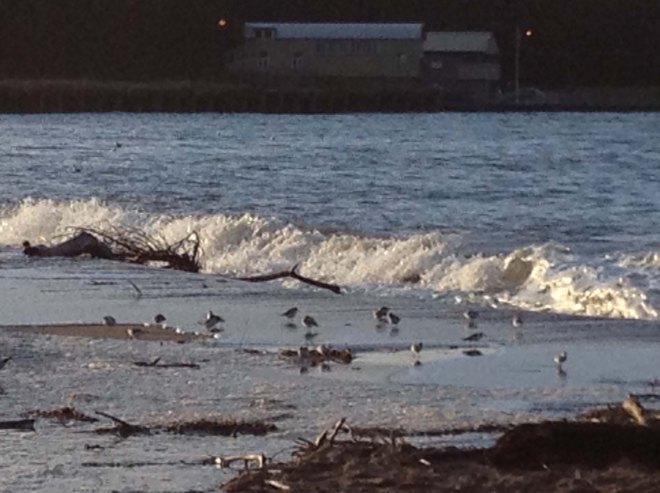 Mark Cocker describes them more succinctly in his magisterial Birds Britannica: “Sanderlings are the Keystone cops of the British seaside…The manner in which they first scurry away from an incoming surge, then instantly reverse to follow it back out, also has something of the quality of those speeded-up cop chases popular in the silent-movie era…Yet the comic note belies their heroic migration…There is evidence to suggest …a round trip of 17,700 miles.” 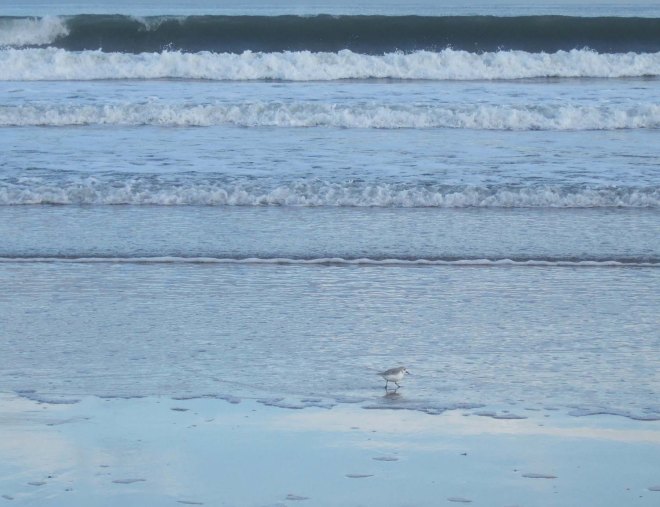 As we retraced our steps back to the Beadnell car park, we saw many more fascinating birds – turnstones, dunlins, curlews, gulls, oystercatchers – even a rare and beautiful great white heron having a fine time, feasting on local delicacies in the Brunton Burn.

But nothing made our day quite as much as the Keystone Cops of the British seaside: the sanderlings!

However, we did come home with treasure… 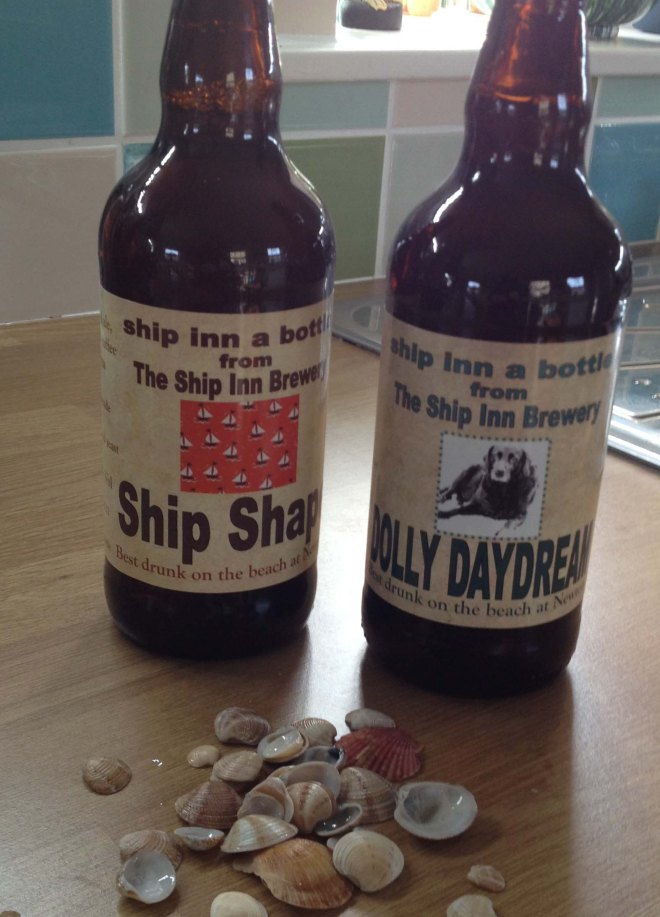