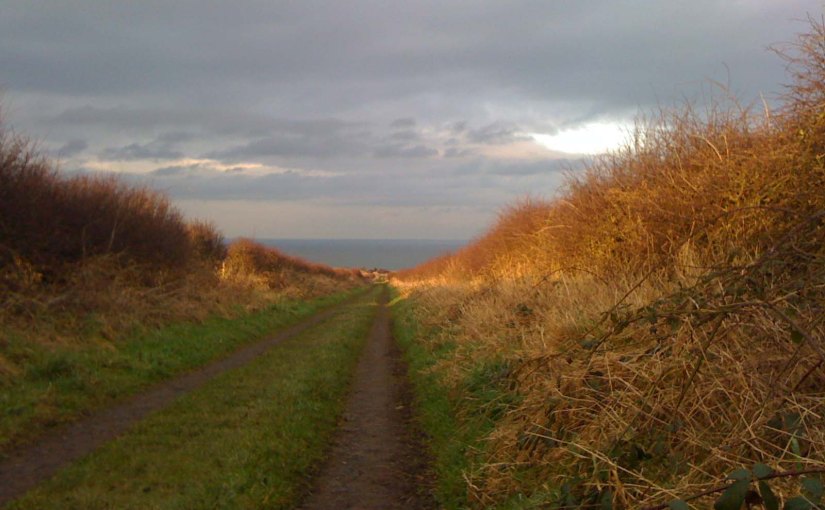 I find one of the greatest ordinary pleasures in life is to be doing the same walk through the months, and over the years.  Many might find this boring, but the opportunity to see small changes in places you know very well is – to me – a great delight.

Last year I wrote about our local beach walk in just such a manner, and in this blog I’m going to explore another favourite local walk of ours that takes us in a circle from our home at Seaview up the hill, along the ridge, and down the old railway track, coming back along the sea and the modern eastcoast railway line.

The most challenging part of the walk is the very first part as you walk up the long hill behind Seaview. But there’s always something of interest.  Some wet winters the old duckpond reappears behind the farm buildings  …

Then there is nothing for it but you must turn your attention to the hill … up and up it goes, – a gentle incline, but a long one. It’s always me struggling just this distance behind Stephen …

Even on lush summer days it is an effort … 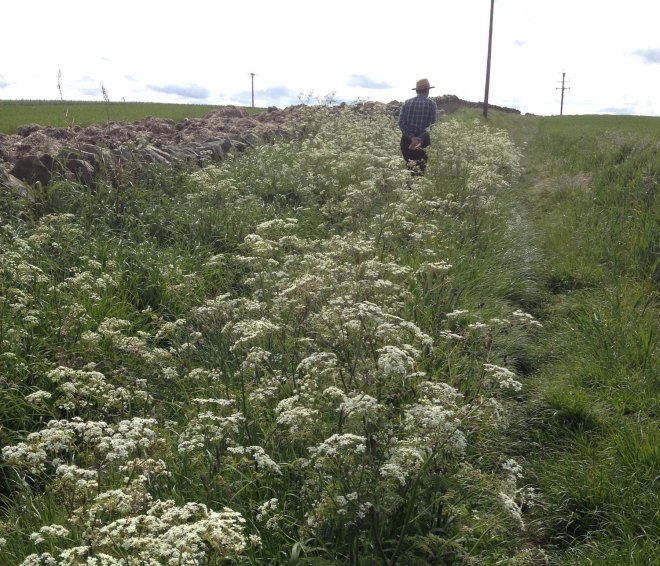 The view is always different, depending on the time of the year …

Finally – oh glorious moment – you reach the top, and can pass through the gate and out on to the ridge. There’s a better track here because it is used by all the farm traffic …

Looking down from this height on Seaview with the sea behind is uplifting. The field is full of stubble here, glowing in the half-light of a late December afternoon … 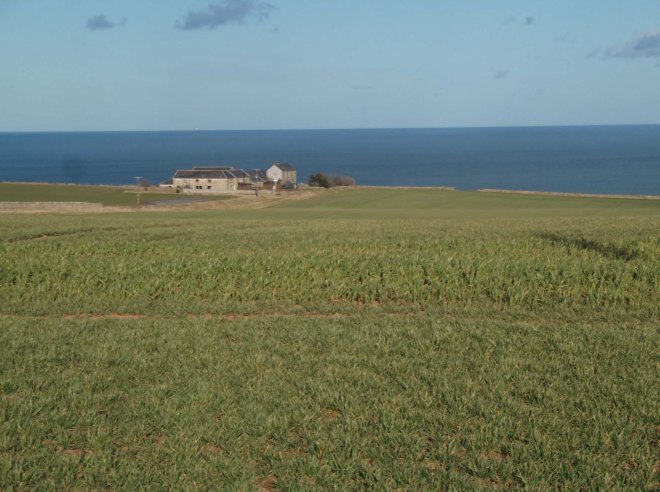 By June the green is lush and has intensified …

And by August it’s golden …

Earlier this year, the walk along the ridgeway was quite different from how we have ever known it before.  The evil Beast from the East had blown straight off from the sea, creating the most curious drifting snow shapes.  Conditions were so unpleasant that we didn’t get out for several weeks, but when we finally did in mid-March, the remaining snow was sculpted and very dirty. Meringue-like, I thought …

Thank goodness, it is more often like it was yesterday – blue and green …

This part of the walk takes us past the old radar station . And yesterday we stopped off to investigate …

This is one of a series of radar stations operating up the entire east coast during WW2 (known as Chain Home Radar). And what a fine view of the North Sea this position commanded! 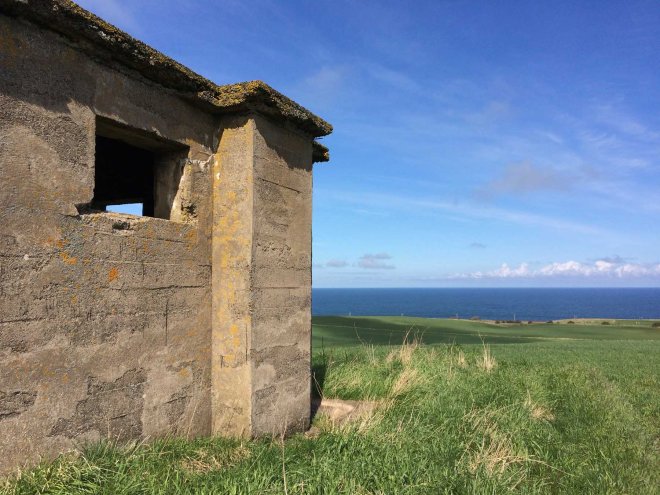 There are two buildings here … 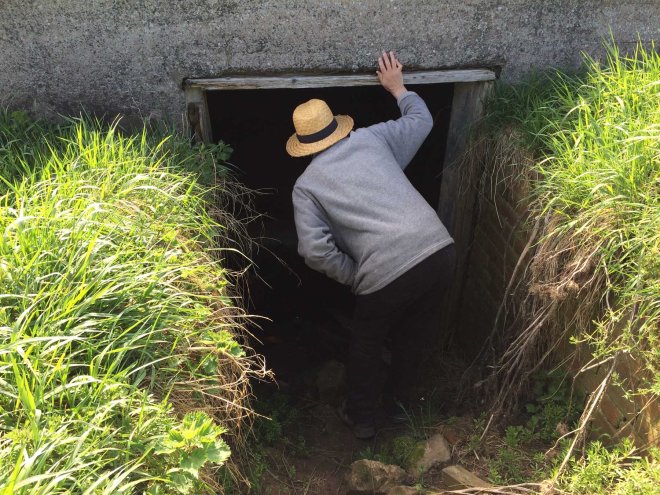 Such a change in mindset over the generations!  How differently the men working here in the 1940s must have felt to the people who visit nowadays – and that includes us …

The same generational change applies to the stone wall along this part of the route. It’s crumbling badly. Sadly it seems modern farmers often don’t rebuild walls, they just chuck away – or if pushed replace with fencing … 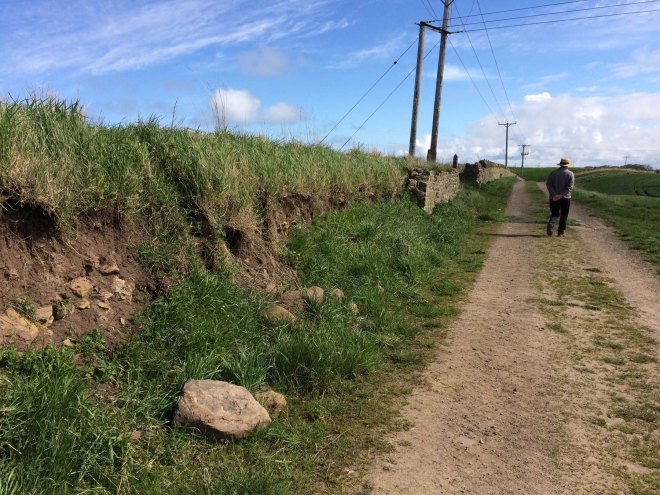 Back to the next part of our route, walking along the road. Here it is several weeks ago when it was wet and watery as well as snowy …

What a miserable grey day for a walk! But fascinating too.  We never know what we will find as we turn into the old railway track.  Sometimes there are huge muddy puddles here …

On other occasions, we’ve been amazed and delighted by the ice patterns … 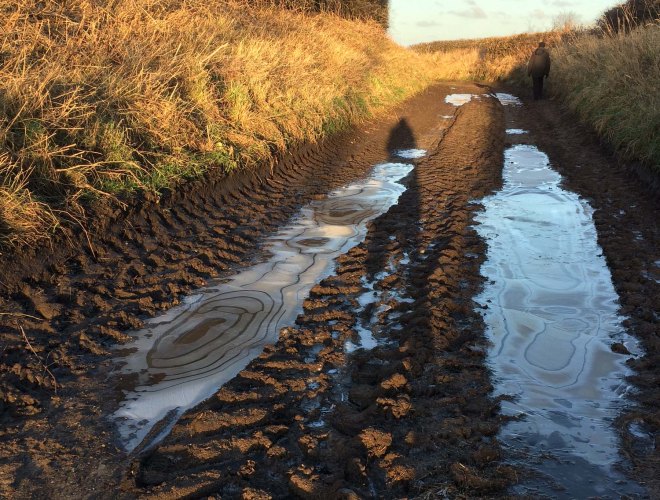 Apparently this lovely phenomenon is known as cat ice …

But when the Beast from the East visited, it left muddy puddles and deep snowdrifts in its wake …

This old railway track (known as the Scremerston Incline) was laid down about 1815, and ran from the Scremerston colliery, carrying coal across the land down to the coast, where it met the public carriage way (as you can see in this 1844 plan by engineering surveyors, Martin Johnsons and Fox). From there coal was transported to the nearby river Tweed and could be shipped off to purchasers in Europe and the south.

What exactly is the magic of walking down old railway tracks?

The history of the place, I wonder?  Here you can still see – just! –  the old stone sleeper blocks where the rails rested …

This photograph taken on our warm walk yesterday shows just how inviting it can be, with that blue blue sea calling you down …

There is so often something special to see here, from a small clump of determined snowdrops on a cold winter’s day …

To vibrant gorse in the early spring …

And fragile harebells in late summer …

I think I love it best in the autumn …

When we walk down here to pick blackberries …

And enjoy other fruits abundant in the old hedgerows …

But at other times, you find yourself looking down into deep wild secret places …

Not far on from here, the old railway track was subsumed into the main eastcoast railway line, as you can see in this 1922 Ordinance Survey map (actually surveyed 1856-60 not that long after the opening of the Newcastle and Berwick Railway in 1847).

And if you’re lucky, you’ll get a modern train blasting its way past you!

Nothing sparks up a cold January walk like a speeding train!

But there are other pleasures to this part of the route: playing silly games in the wintry light of a November’s day … 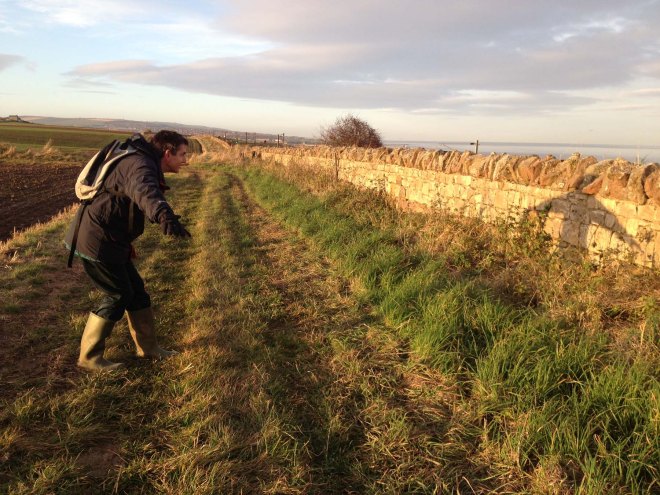 And at the end of summer, there’s the willowherb looking amazing …

This solitary apple tree sits so close to the railway line!  We think it must be the result of casual flick of a discarded apple core as perhaps the Flying Scotsman sped past … 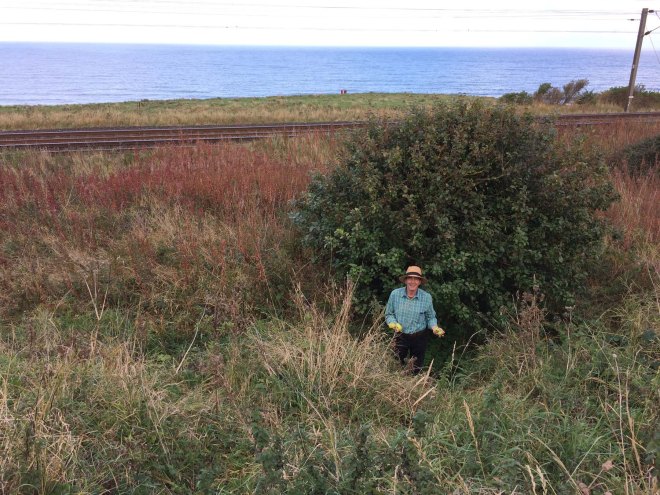 We always inspect with interest the area round this drain.  It passes under the main eastcoast line, and was installed the spring after we arrived …

The field drainage here can be very bad in winter (even now), with the water funnelling down the hill and reviving ancient waterways … 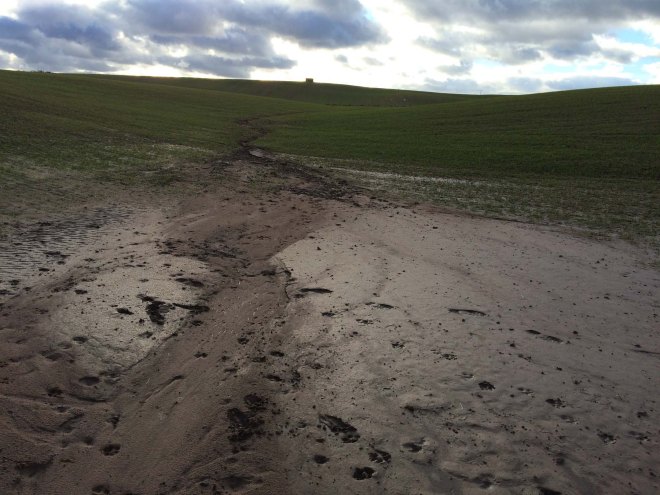 In the spring of 2011, after heavy snows, so much water collected here with the snow melt that it threatened to wash away the eastcoast mainline train track. So Network Rail arrived in force to construct a new drainage pipe under the railway line. 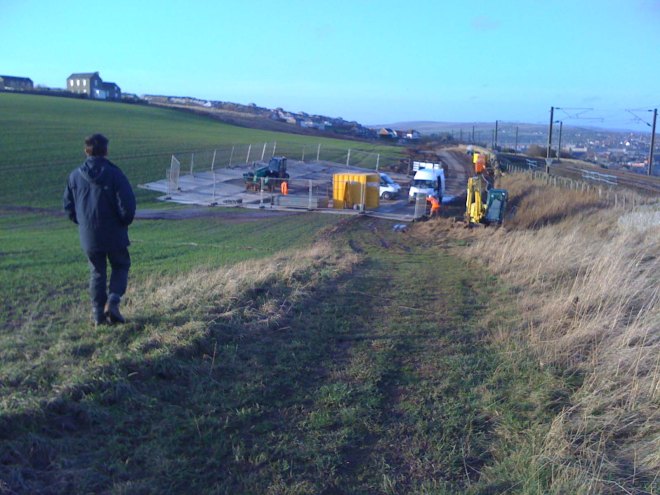 So muddy was it, they constructed a roadway – with of course road traffic signs! 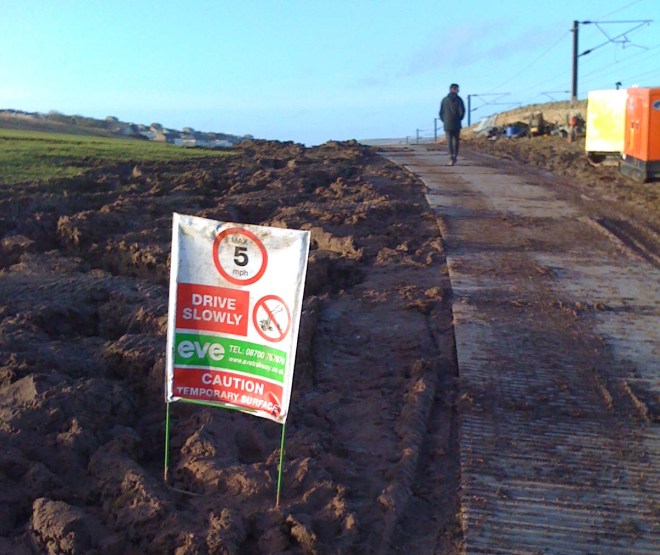 All long gone now, of course, and on an ordinary wintry day, it looks like this as Berwick appears in the distance … 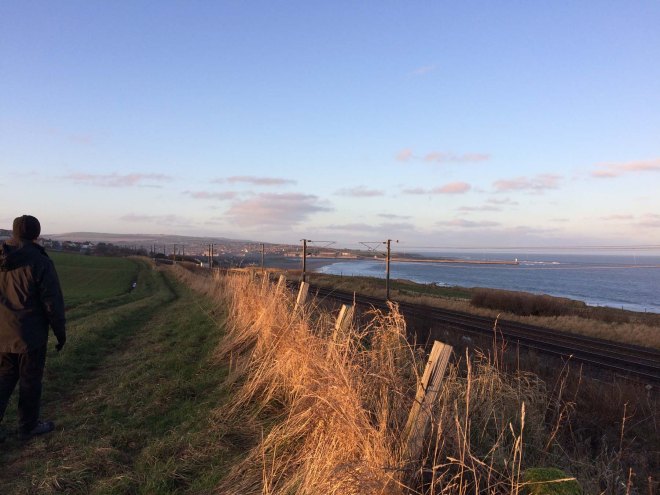 We’re coming to the end of our walk now … 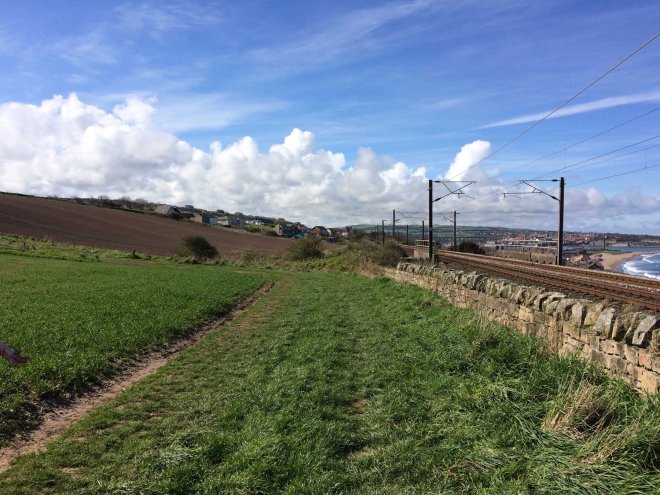 At the end of this field, we’ll turn up the hill and are on our way home … 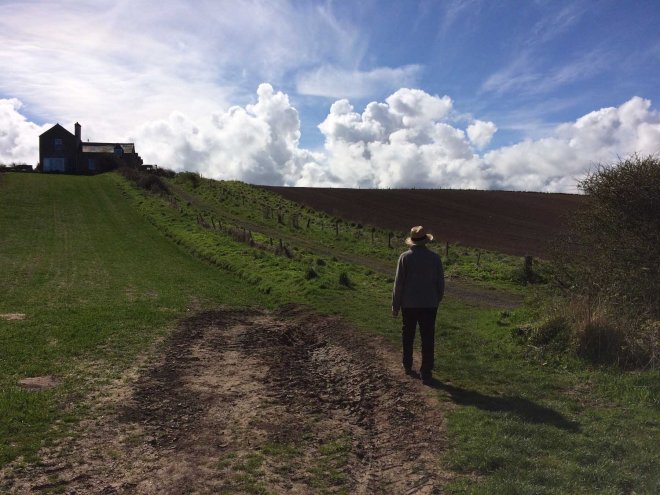 This muddy patch was the site of the old rubbish tip, and sometimes we find interesting bits and pieces in the mud here. So on  good day we’ll come home with treasure … 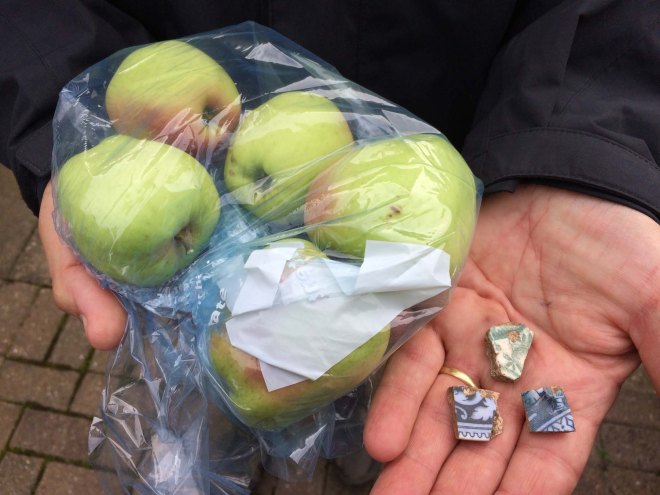 But it’s a good walk, even without treasure!

With grateful thanks to: