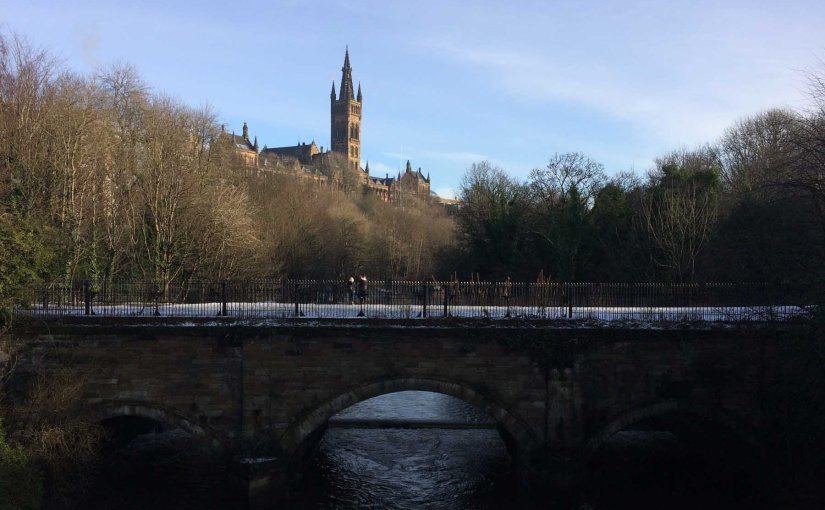 Last weekend we had a very kind offer of cat-sitting so leapt at the opportunity to head off to unexplored places.  As it was snowy and icy, we decided the best thing was to travel by train, and settled on Glasgow, a city that we’d only visited briefly on a day visit last summer.

The streets in Glasgow had been gritted and cleared of snow, but not so the pavements which were icy and treacherous …

But walking up to the glorious Kelvingrove Museum in bright sunshine, that didn’t seem to matter … 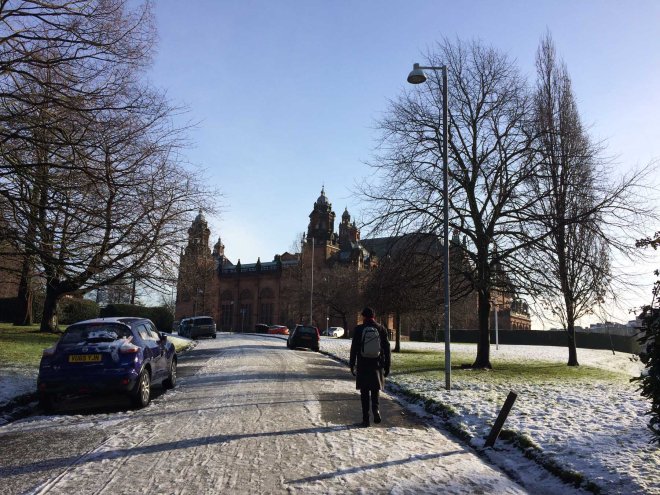 How the sunshine transformed the great hall …

Opened in 1901, the Kelvingrove Art Gallery and Museum is such an extraordinary statement of ostentatious Glasgow prosperity – with an organ, no less, in that Great Hall! It was comfortably busy and bustling when we visited – lots of children, visitors of all nationalities, people waiting for the organ recital (which was splendid, and I wish I could play it for you here) … 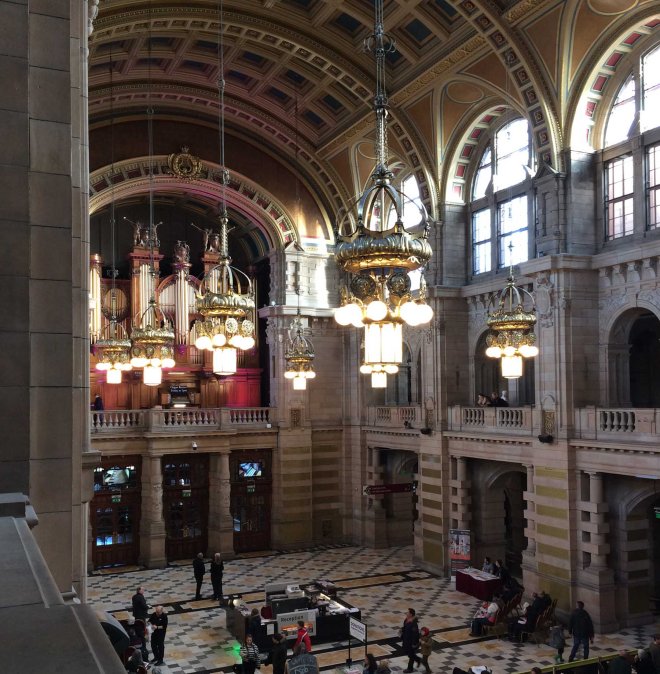 I love the detailed craftsmanship on show in the museum itself – aren’t these brass door handles very fine?

Just as much as I love the modern jostling with the old. The hanging heads are part of an installation by Sophy Cave of Event Communications …

I wish all museums were as upfront about their display policies …

There was lots and lots of tempting things to see, but what I most wanted to look at was:

This is a very big year for Charles Rennie Mackintosh admirers because it is the 150th anniversary of his birth – and lots of big events are being planned, including a major exhibition at the Kelvingrove Museum itself opening in March, and the re-opening of his refurbished Willow Tearooms.

Another exhibition planned – much smaller but of considerable interest to me and my friends – is the Association of Guilds of Weavers, Spinners and Dyers National Exhibition in July at Strathclyde University. This will celebrate its presence in Glasgow on this particular centenary with an exhibition of Guild members handmade jewellery in the style of Mackintosh. “Jewellery can be of any textile nature, for example, they could be spun, dyed, felted, knitted, crocheted, tatted, woven, braided – whatever shows the creativity of the entrant.”

What an exciting challenge!

So here I was to look at the exhibits in a particular way: to see how I could re-interpret Mackintosh’s work in a piece of jewellery.

I had to be careful first of all not to be led astray by some of the gorgeous exhibits by other Glaswegians. We were both immediately struck by this very beautiful wall panel from the Argyle Street tearooms, dated 1898-99. But this was in fact made by George Walton & Co. A pity – this is truly inspirational!

And this fine washstand with those characteristic Mackintosh long lines (look at the side panels) is in fact by John Ednie c.1900.  We spent ages looking at it because according to the information tab it was made of oak, glass, metal, marble, ceramic and leather.  Blowed if we could see any leather!  Must be inside the drawers, we decided … 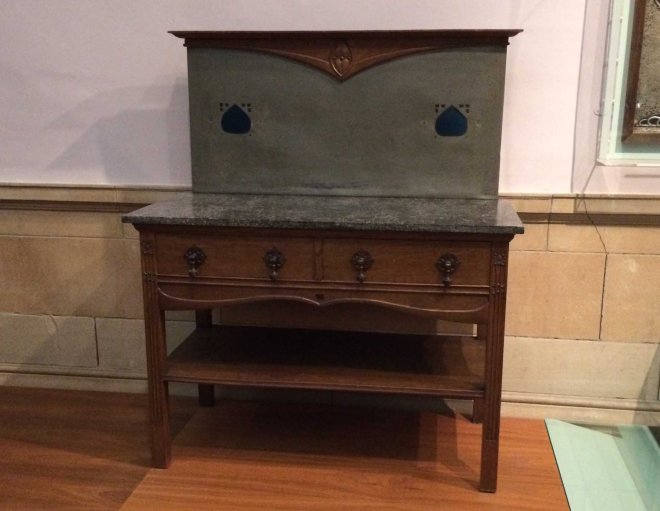 So where was the Mackintosh in all this gorgeousness?  There was a chair, of course – and very intriguingly displayed next to others of the period.  It’s the centrepiece here – designed for the Ingram tea rooms …

And it was in the Chinese Room from the Ingram Street tearooms, designed by Mackintosh in 1911 that I found my best inspiration … 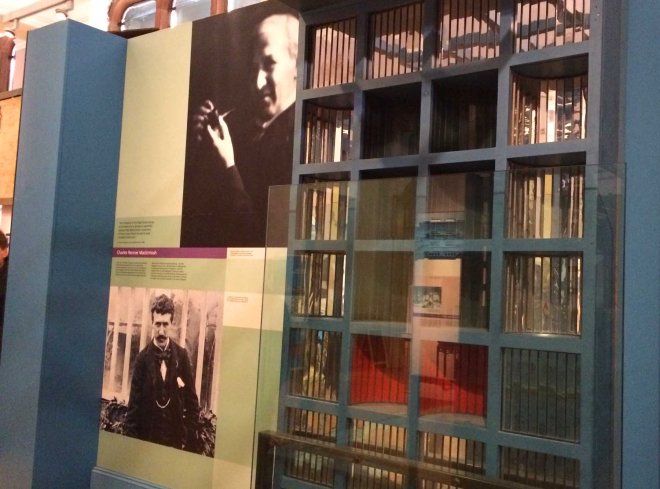 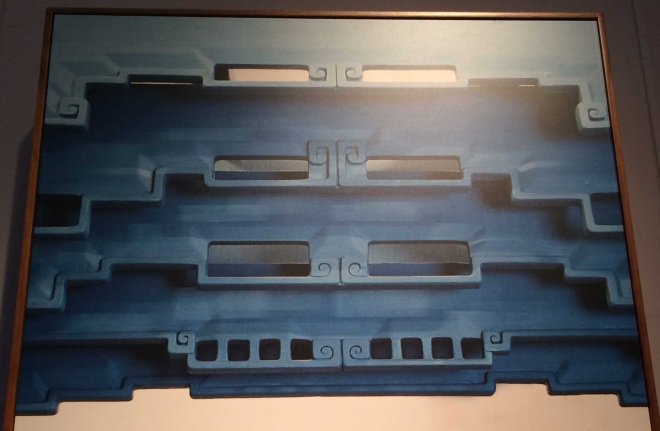 Intriguingly we found upstairs among the historic Scottish exhibits pattern work very similar to that of Mackintosh and his Glasgow style compatriots. Look at these curved axe-heads and the long lines of this bronze dagger.  They are part of the Gavel Moss hoard found at Lochwinnoch and dated 2000-1400 BC … 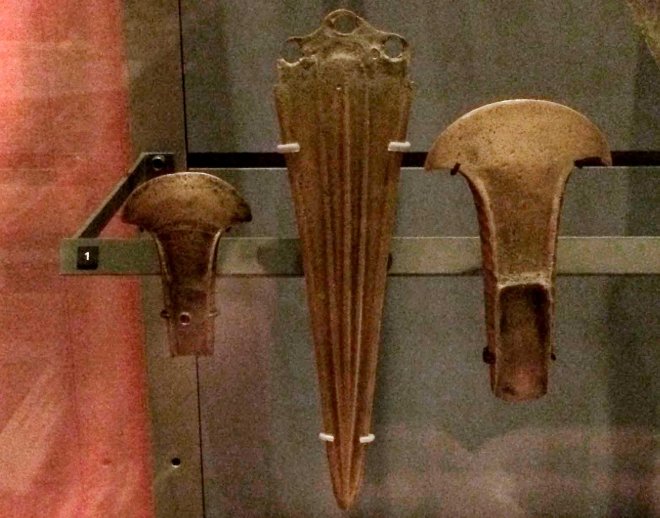 This Thistle brooch is 10th century Viking work, but could happily sit downstairs with Mackintosh and his fellow Glasgow artists of the 19th/20th century … 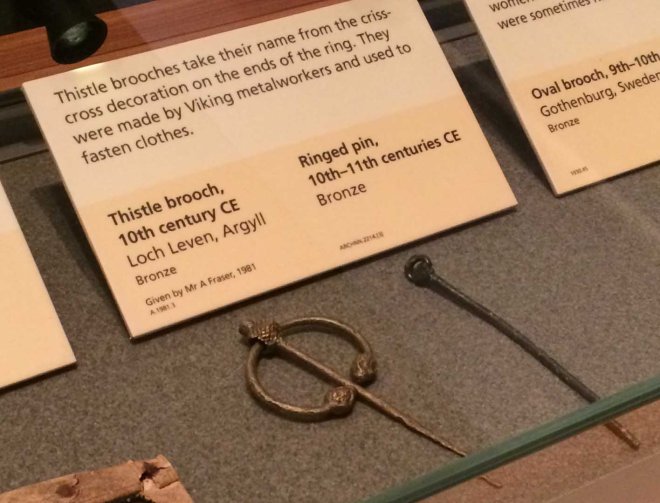 The snow plough was out gritting the streets of Glasgow on Saturday night – which made us chuckle – no sign of snow on the streets anywhere! 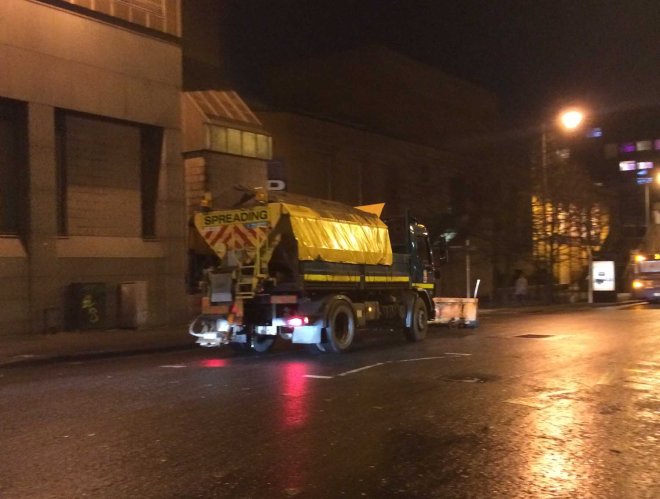 But we laughed a little less on the Sunday as we set out on an icy grey snowy walk up to St Mungo Museum of Religious Life and Art. It was cold – and there was more snow …

We were well wrapped up …

I was wearing all my handmade, homespun, woolly knits (even sporting my handknitted felted handbag), so I was toasty! But Stephen disdains my lovingly-knit creations, saying they’re too scratchy.  Well, who looks most cosy here?! 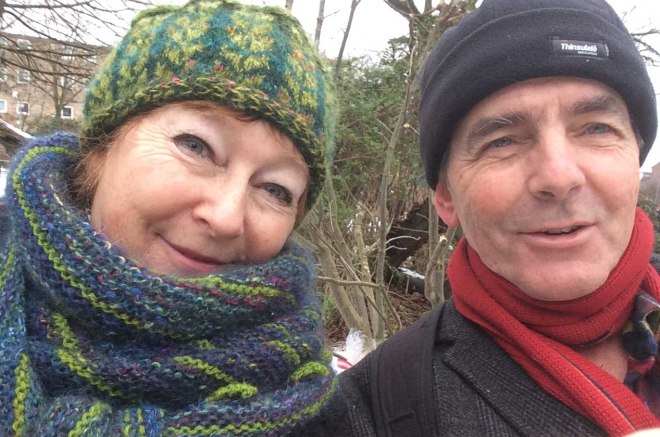 Lots of fascinating items covering the breadth of religious faith and worship in the St Mungo museum, but I was struck by two pictures – and intrigued by my reason for liking these two very different pictures.

This 1992 Aboriginal painting titled Kangaroo Wild Cabbage, Ceremonial Spear, Possum and Bush Carrot Dreaming is by Paddy Japaljarri Stewart, Paddy Japaljarri Sims, Bessie Nakamarri Sims and Pansy Nakamarra Stewart, Warlpirri People, Yuendumu. It tells the story of the Dreamtime travels of some of their many spiritual ancestors. I struggle a bit to understand this picture as such – this is all so different to my culture, I guess.  But what I really love are the colours and the patterns …

And it is pattern which draws me to this picture too. It’s called The Sabbath Candles and is by Dora Holzhandler. What a pattern fest – pattern everywhere!

But we had a colourful treat for the end of our Glasgow trip – just time to drop into my favourite shop here: Paperchase!  Now if this colourfest isn’t sustaining in the snowy grey, I don’t know what it is.  And – on that note – time to go home … 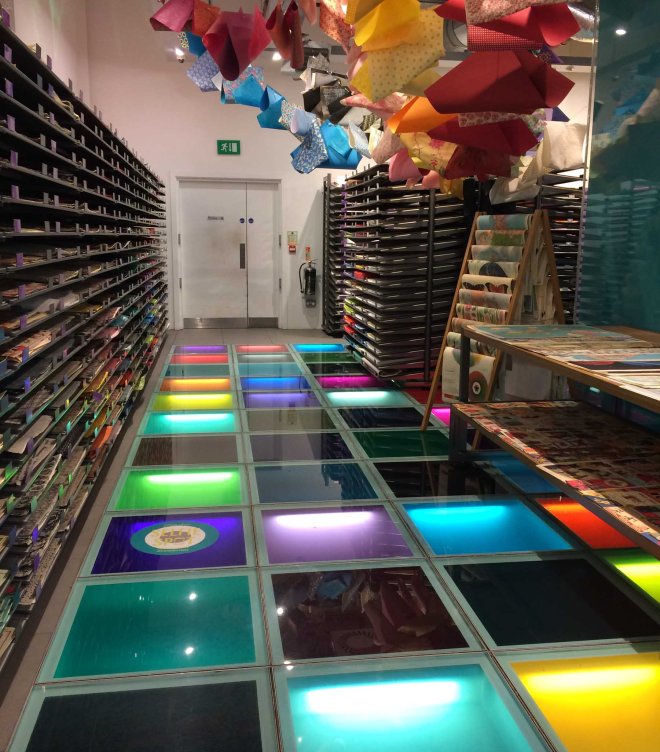 The Border Union Show is traditionally held on the last weekend of July, at Springwood park, just south of the river Tweed and the Scottish Border town of Kelso.  If you look carefully at the banner picture above this post, you will see Kelso’s historic Abbey looming dramatically over the glitzy showground site.

It’s primarily an agricultural show – a chance for the farmers of the locality to meet, greet and compare. But lots of other bodies join in the fun – and I was there as a member of the Tweed Guild of Weavers, Spinners and Dyers to demonstrate with my little Innerleithen spinning wheel.

I’ve been going to the show as a demonstrator for several years.  We’ve had scorchingly hot years, and a thoroughly miserable wet year (last year – see my 2015 blog post for the Tweed Guild for how we survived the rain), but this year was proper traditional Scottish weather with sunshine and showers.  The plastic covers went on, and the plastic covers went off.  We ran inside with spinning wheels and our knitted displays – and then they all came out again!  It was hard work, and a long, tiring day, – but great fun too.  Not just for me – everybody everywhere seemed to be having a blast.

This year we found ourselves in the best of company.  We were sharing a tent with the Dunse flock of rare breed sheep! 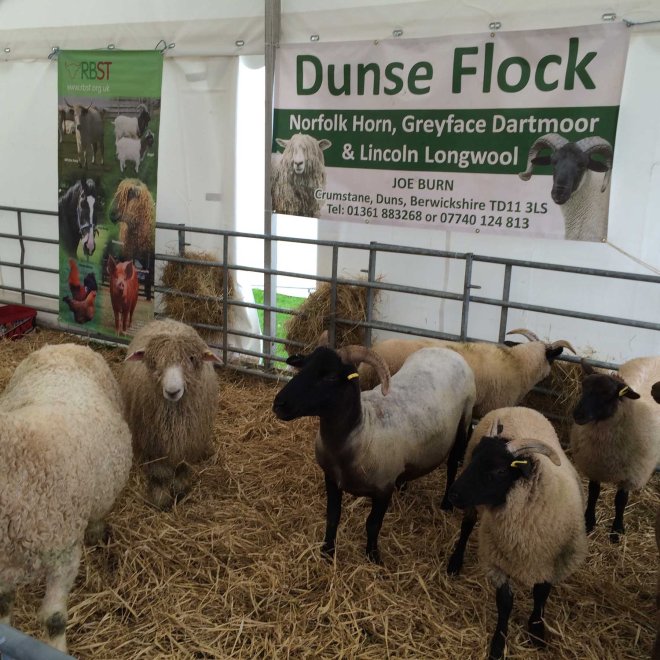 They are lovely – but at close quarters, in a tent all day – yes, they do pong a bit (especially when their fruity fleeces come inside to avoid the rain). 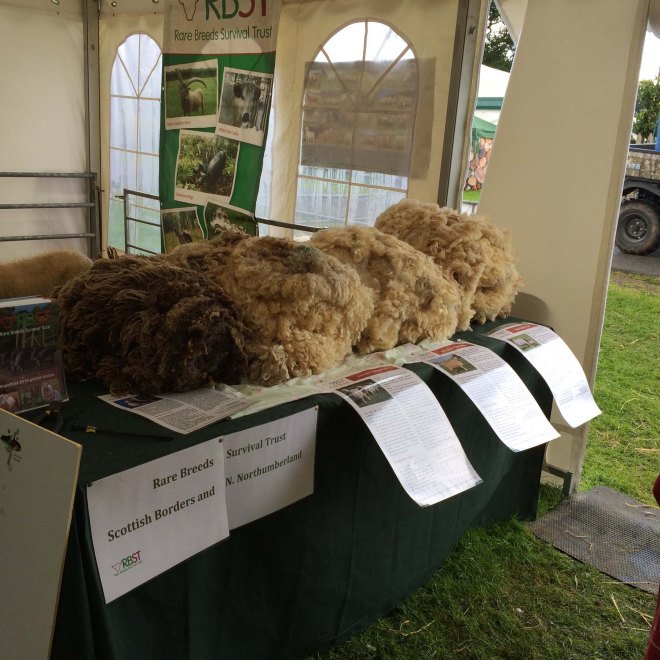 I did not envy those members of the guild who spent the day based inside the tent. But they put up magnificent displays of felting and basketry, and demonstrated their skills with energy and enthusiasm right through the day.

There was lots of interest. 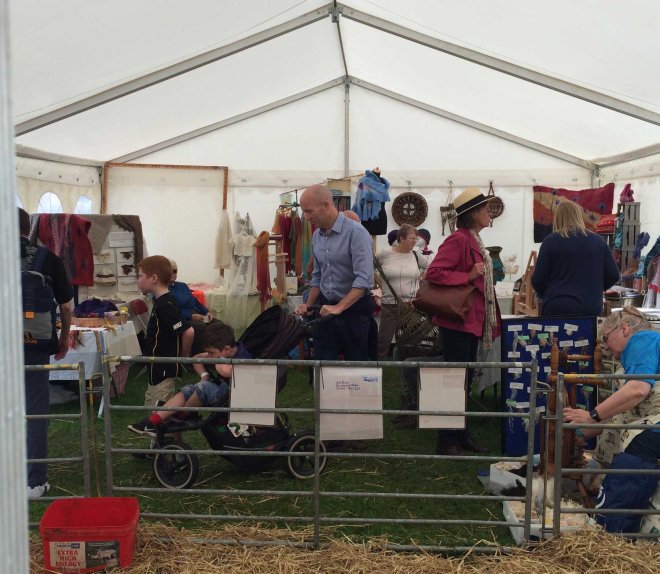 The Tweed Guild also had an interesting display of some of the different breeds of sheep and their fleeces.

And next to it, a beautiful display of natural-dyed materials.  (I’ve been really naughty here and snuck my acid-dyed royal blue Fika shawl into the display 😦 )

Outside there was a group of spinners.  This worked very well, as we attracted a lot of interest from passers by.

And there were spinning lessons!  Lots of youngsters were fascinated by the spinning wheels. Such a great pleasure to show them exactly what spinning entailed. 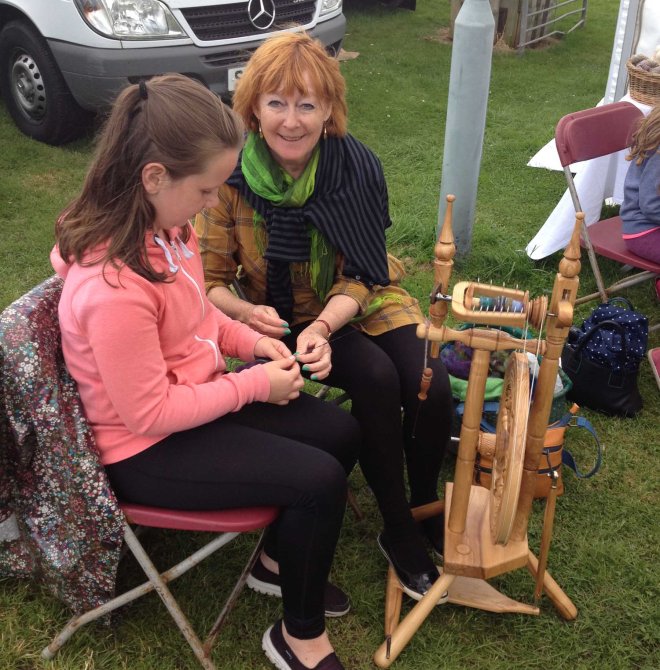 But we were only a teeny tiny part of an enormous enterprise occupying 46 acres of parkland. I cannot do justice to it all because I only took short walks around, but let’s make a start with the animals as they were after all the raison d’etre for the show.

As we walked around, an enormous bull lumbered out of the showground.  It looked docile enough, but we were stopped well away to allow it to pass a safe distance from the public. 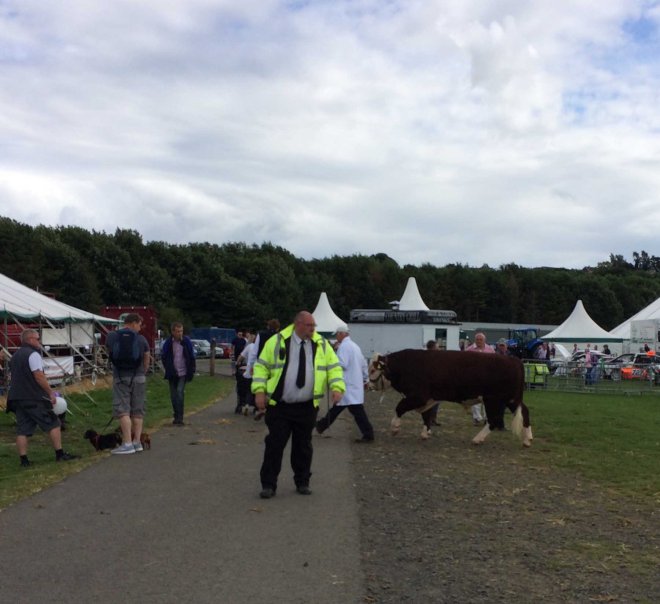 The other bulls were waiting inside looking remarkably peaceful and calm.

Further on, we came to the sheep. I love to see farming folk studying the sheep, leaning into the caging – as they have done since time immemorial (check out this fine Ravilious picture in the Beaford archive). 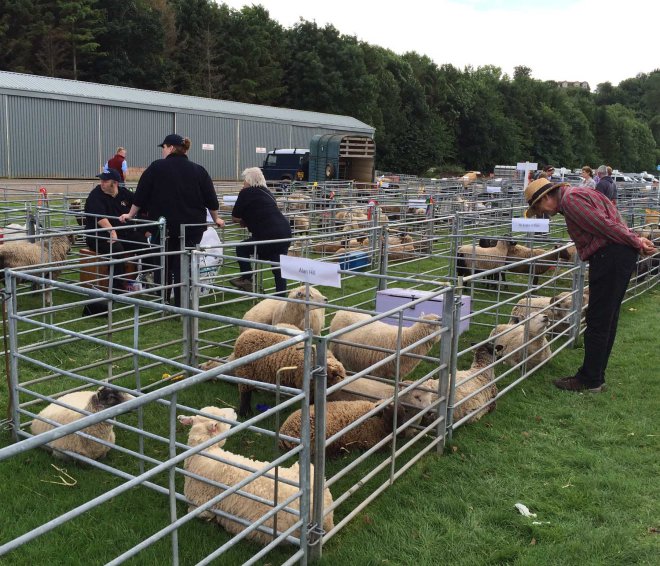 There were even some Blue-face Leicester sheep – highly prized by spinners! 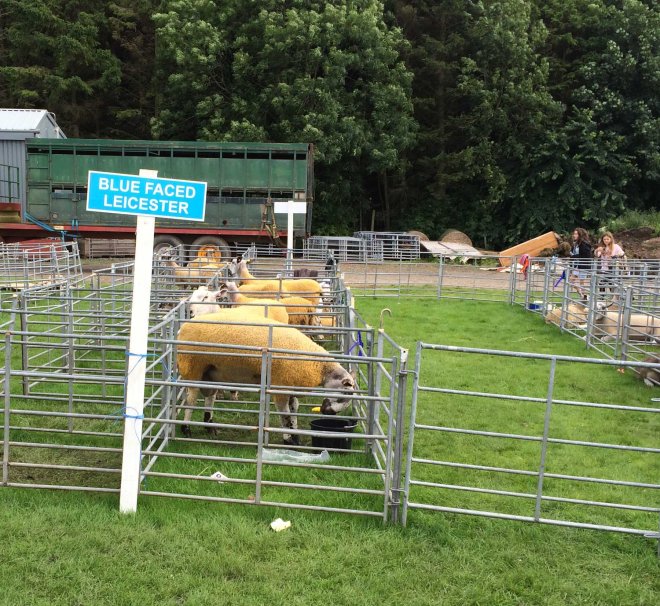 Canny sheep were taking advantage of all the food on offer.

In a nearby tent, there were goats – interesting to see what a lot of young people seemed to be involved with them.

Not all animals were flesh and blood.

I was particularly intrigued by the egg judging in the poultry tent.  For some reason, I had not thought that eggs would be judged – only the birds. Clearly the quality of the yolk is an important part of the judging criteria.  Not Stephen’s favourite spot (he doesn’t like eggs).

I’ll finish the livestock pics with some of rabbits because Stephen took an enormously large amount of photos of them.  Aren’t these little cuties?!

In the main ring, meanwhile, young motorcyclists were entertaining the crowds with terrifying daredevil feats.

There’s definitely a macho feel to this place. There are big boys’ toys (photograph kindly contributed by Stephen).

We are never allowed to forget that there is serious money behind all of this.  There were more spanking new four-wheel drives on this showground than I have ever seen before in my life.  The big landowners are in evidence – not just in their tweeds and their cavalry twills, but at the stalls. 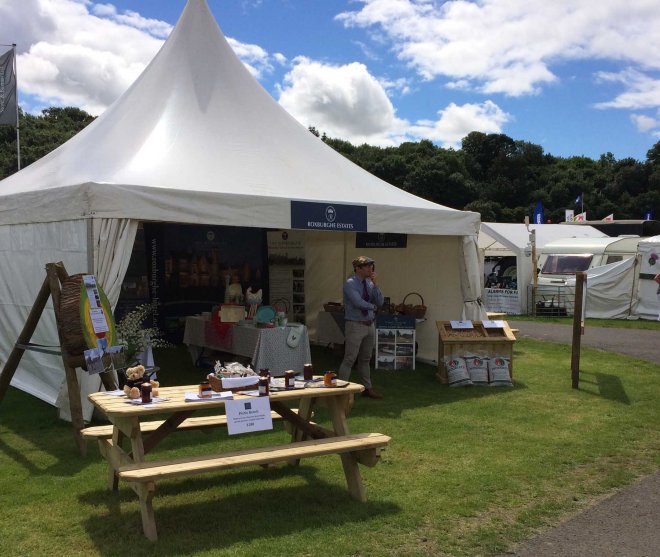 There are plenty of expensive shops around. 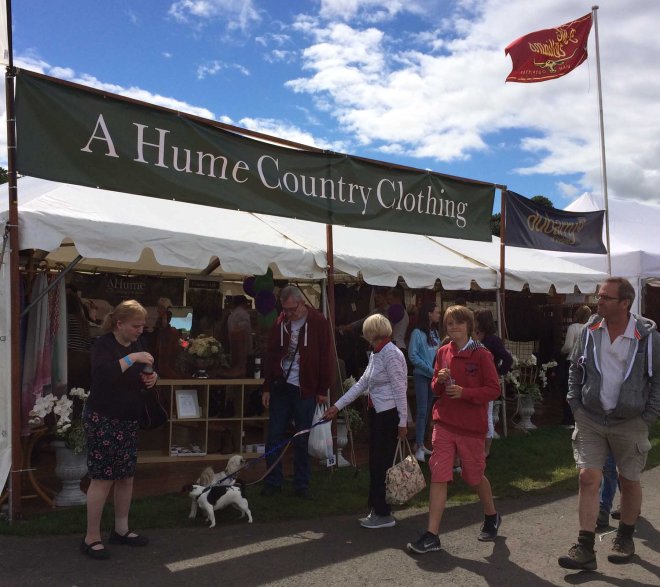 Thank goodness for cheaper treats that we can all enjoy on a sunny day out.

What fascinated me most was the Industrial Section.  Inside were competition entries for jam-making, flower-arranging, children’s pictures, knitted garments, cake baking etc etc.  I’ve never heard it referred to as Industrial before – it’s more what I would have expected to be the province of the local Women’s Institute.

What really shocked me about the displays was the wire fence caging them in. To stop passers-by handling the goods, or worse, perhaps to prevent theft?!  Either way it looks dreadful.  Particularly in the case of the children’s competitions.

I’ll be the first to admit that my taste is never the same as the judges.  Here’s a prize-winning floral arrangement.

And here’s the one I would have chosen – the honeysuckle arrangement on the left. 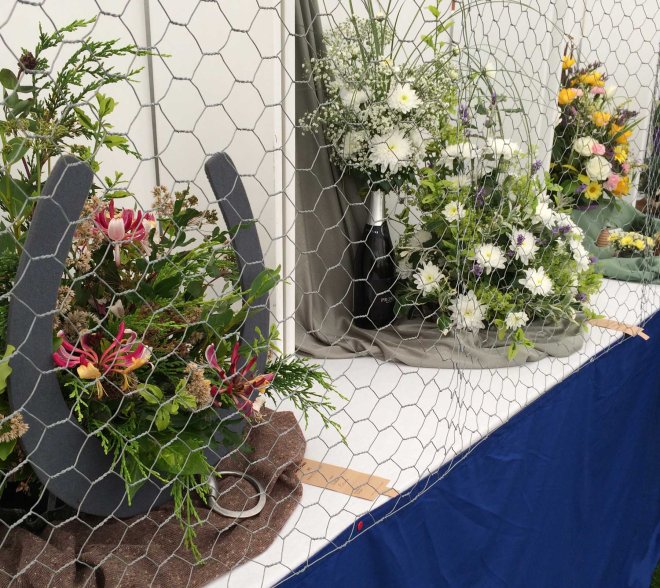 Perhaps there is a bit of an old-fashioned look to some of the competitions?  Hard to say really because nothing is shown to best effect behind chicken wire…

Lastly, just time to show you one of my favourite parts of the showground.  Small demonstration beds where they were growing sample plants for fallow ground – linseed, red clover, marigolds and cornflowers etc.  How wonderful it would be to see more of these grown over our landscape!