You can’t live in Northumberland without being conscious of the presence of the saints of old who once lived here. Modern street names remind us of them, they are remembered in the local names for wildlife – and their stories crop up all over the place.

Our own most neighbourly saints here in north Northumberland are Cuthbert and Aidan who are associated with nearby Holy Island – but there are others not much further away. And one of our projects earlier this summer was to explore a little further afield and find out about these more distant saints.

May took us to glorious Galloway on Scotland’s west and most southern coast. Late spring flowers were at their very very best … 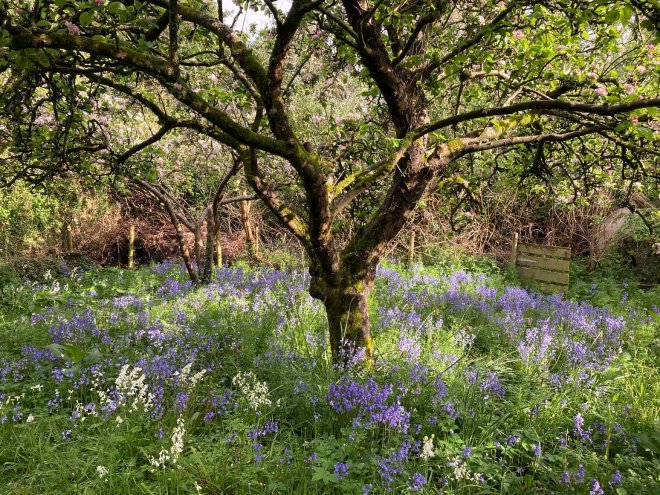 We were staying in Wigtown, a place noted for its very tempting second-hand bookshops.  We were indeed tempted by them …

And so much history. This beautiful walk amid the wild garlic took us from Garlieston to Rigg Bay where they tested the Mulberry Harbour used in the Normandy Landings. That curious concrete shape is all that’s left of this important project … 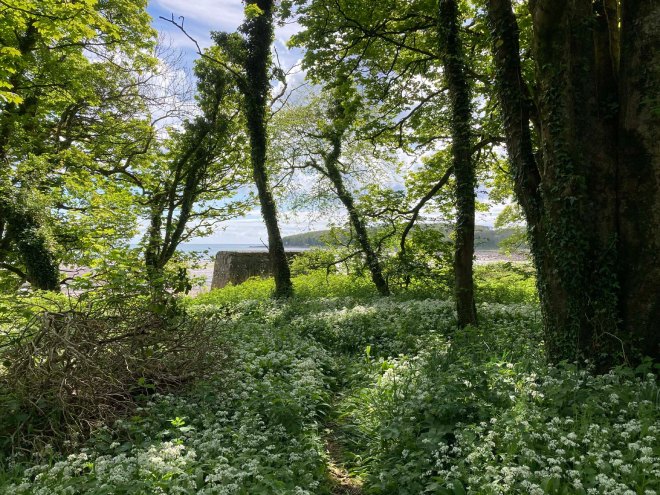 But oh so inviting …

And then there was the heart-breaking story of the two Covenanter women, Margaret McLachlan and Margaret Wilson, who were tied to stakes in the Bladnoch river to drown when the tide came in. They were Scottish Covenanters who refused to acknowledge Kings James VI and Charles I as head of the church. This memorial to the Wigtown Martyrs is a hauntingly sad place – inconceivable to our modern minds that people should be executed for such beliefs …

But we were particularly drawn to a much older story – that of the 4th-5th century Saint Ninian. Compared to the previous stories I’ve touched on above, next to nothing is factually known about him – it’s so very early that most of the stories about him are entwined in myth and legend, with just nuggets of actual history. Of course, the real challenge for archaeologists and historians is to identify what the nuggets are. What we do know is that Ninian lived at least some hundred years earlier than the much better known St Columba of Iona (521 – 597 AD).

We are indebted for the earliest mention of him to the remarkable early historian, Bede, who was writing in the 8th century – a good many years after Ninian lived. And what Bede recounts, he has in fact acquired through disparate traditions …

Bede tells us that Ninian came as a missionary to the southern Scots (other sources add that he came from Ireland) and that he led a strong revival of faith at the Candida Casa (White House) of Whithorn in Galloway.

Despite a series of excavations, this White House has never been found, but other excavated evidence does prove that Whithorn in the 5th century AD was indeed a thriving and sophisticated Christian centre.

The very early Candida Casa may not have been discovered, but there are fine ruins of the much later priory church (dating to the 12th century). Whithorn remained a pilgrimage destination for many years. King James IV (1473 – 1513), for example, is known to have made a yearly visit … 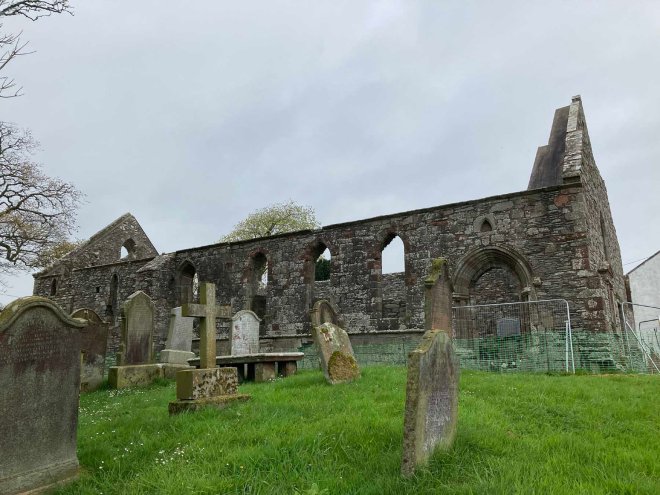 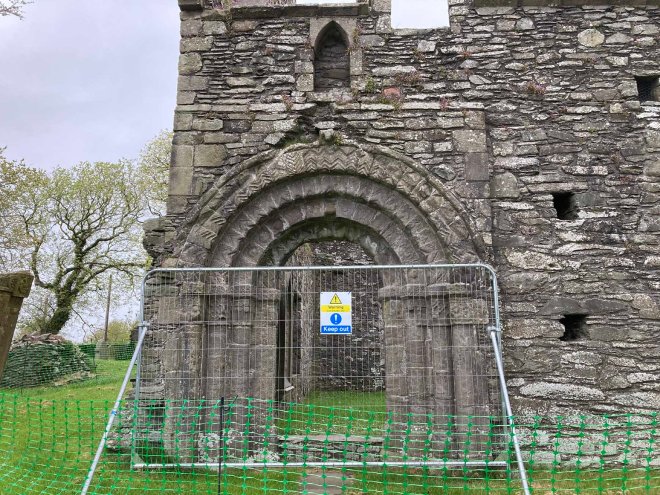 Early Christians may not have left their history in definitive texts, but they did leave clear markers to their faith in the magnificent stone-carved crosses – many housed in Whithorn’s Priory museum. They are so beautifully displayed – the building has the air of respect that’s found in a church … 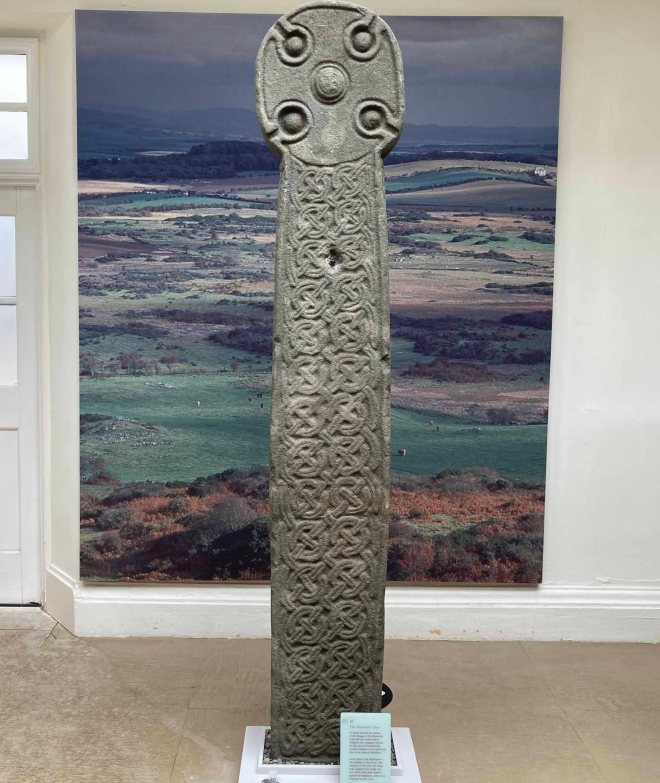 As knitters and stitchers we were struck by the patterns (so reminiscent of Irish Aran cable knits to my mind), displayed here in my montage of photos …

The carvings on the so-called Golgotha stone are the simplest, but it is one of the most powerful stones.  It was found in Whithorn’s graveyard … 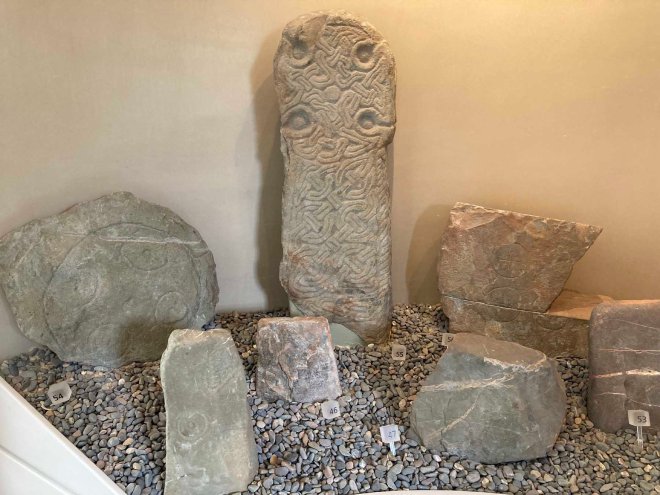 So that is where we went next … 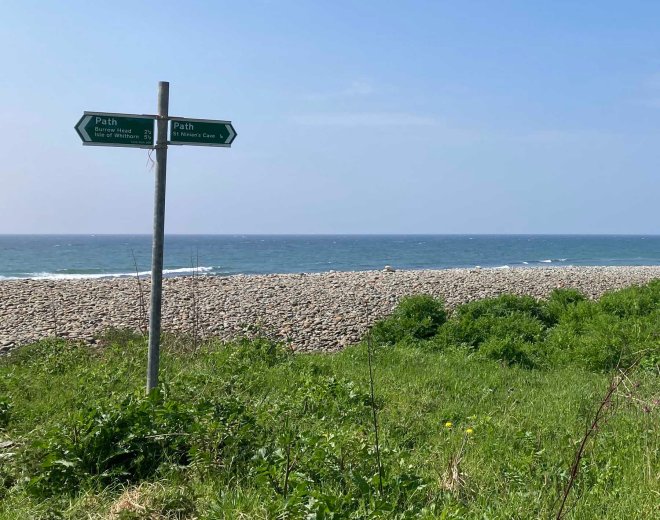 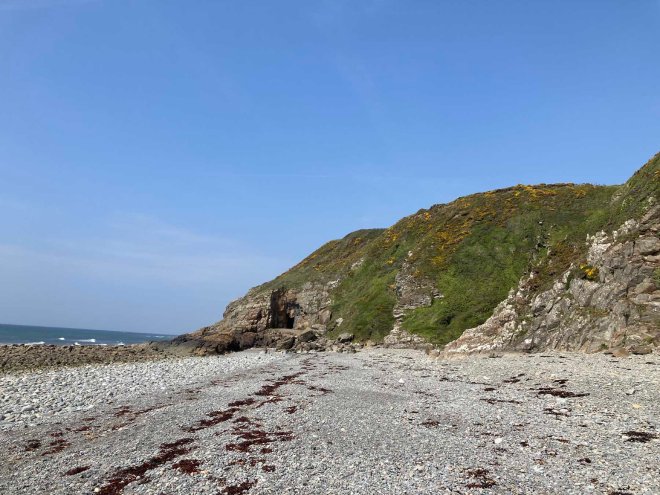 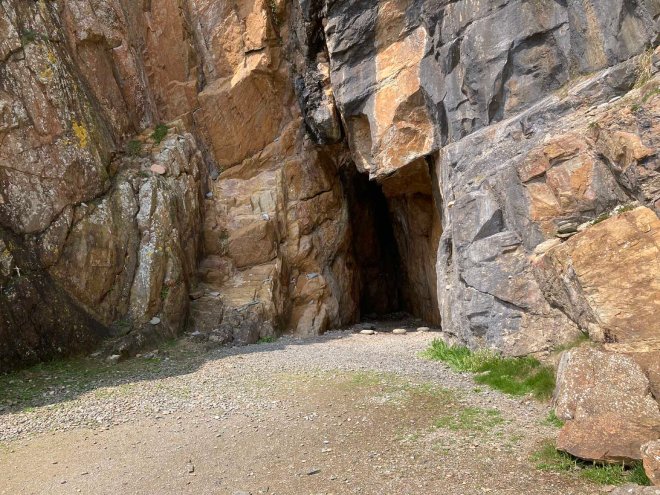 The only distraction being the view of sparkling sea and rock …

It is still a powerful place of prayer for many who visit.  They leave their own prayer markers – Christian  …

Such beautiful flowers along the beach …

We picniced here – a suitably respectful distance from the cave … 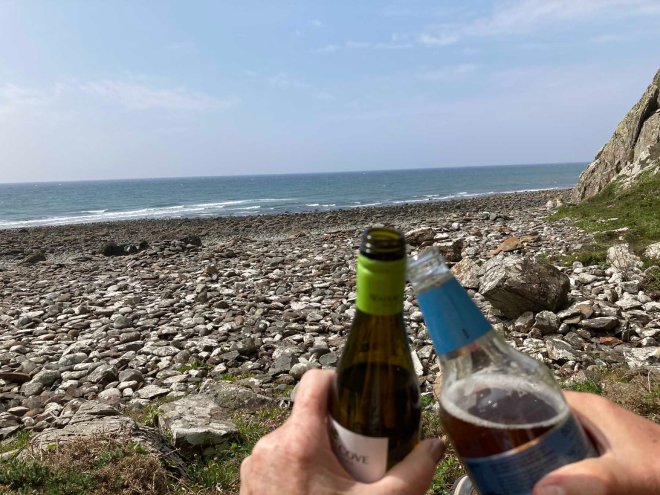 A fantastic holiday, lots of interesting things to explore and enjoy, – but we were left with a hazy – if glowing – mental image of St Ninian. At the very least we know he was one for long solitary prayer. For me, he stands as a saint of the Irish tradition who communed with God in the natural world.

A month after our trip to Galloway, we set off on a day trip to Bede’s World in Jarrow – not far at all, just 60 odd miles down the A1 from our home. So easy that we felt truly remiss not to have made the journey before… 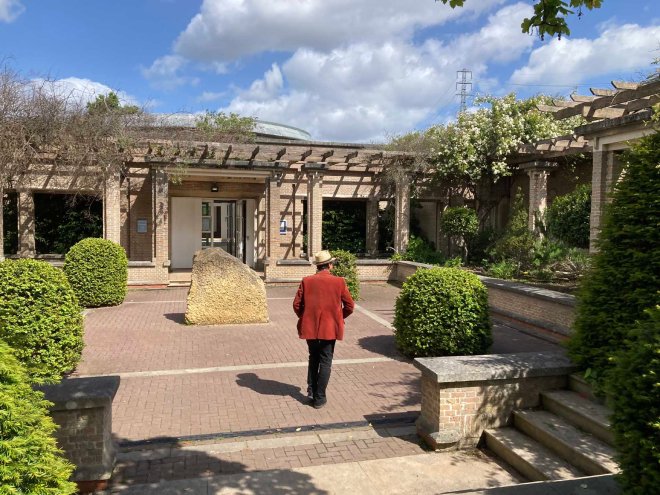 Bede’s World adjoins the historic church and monastery of St Pauls, Jarrow. This museum complex was set up following the excavation of the monastery by Professor Dame Rosemary Cramp in the 1960s and 70s.

It tells the story of the Venerable Bede and his world. We were there to investigate our next saint: Bede …

In contrast to Ninian, we know a great deal about Bede. He was a writer, historian and teacher, and it is largely from his own writings that we learn the facts about his own life. And, yes, this is the same man who wrote the book which tells us about Ninian (pictured above in Ninian’s story).

He was born about 672 AD in the lands just south of the River Tyne in the north of England. These lands had been gifted by King Ecgfrith of Northumbria to the very early Christian church.  Ecgfrith asked local nobleman Benedict Biscop to build a church and monastery there. Biscop, a devout Christian, had travelled several times to Rome. He was an enthusiastic reader and collector and brought back Roman building ideas, as well as books and other artifacts.

The first church he built was St Peter’s, Monkwearmouth (just a few miles south of Jarrow) and it was this church that Bede entered – aged about seven – in 680. Bede moved to nearby St Paul’s, Jarrow (shown below) when it was founded just five years later by Abbot Ceolfrith … 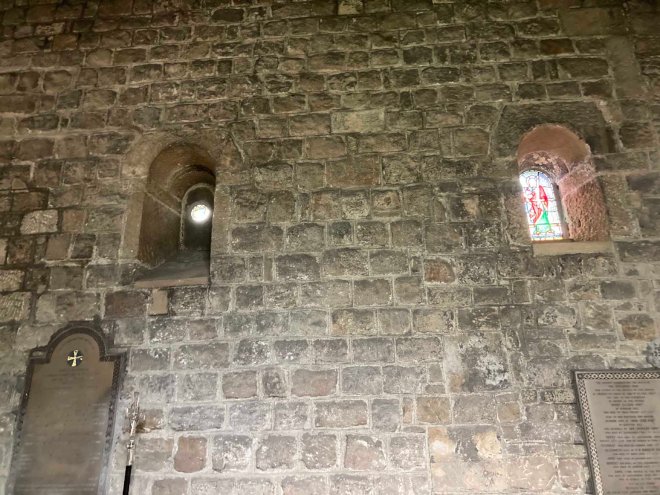 According to the Bede’s World museum, this area was an exceptionally important centre for glass making at the time ….

Going outside again, we walked around the ruins of the monastery that Bede would have known …

But – if you lift your head just over the monastery walls, you can see the 21st century pressing in … 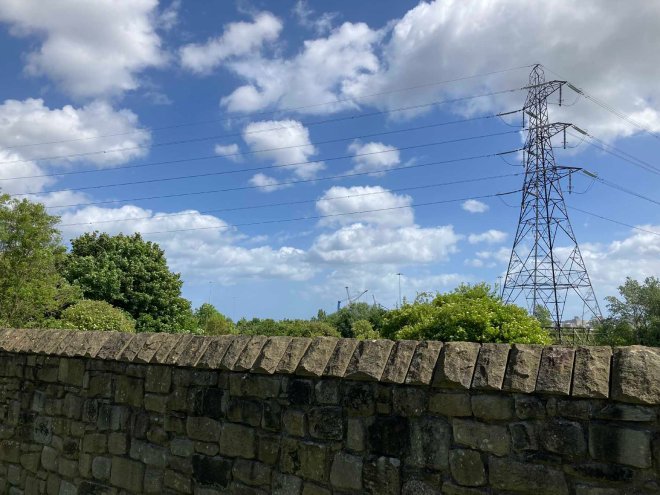 It is miraculous that the Jarrow monastery remains, given that this area of South Tyneside became a centre for heavy industry from the 1850s onwards. This 1963 aerial view (reproduced courtesy of Tyne &Wear Archives & Museums) gives an idea of how the landscape has changed from Bede’s time. Every scrap of land was used for machinery and housing … 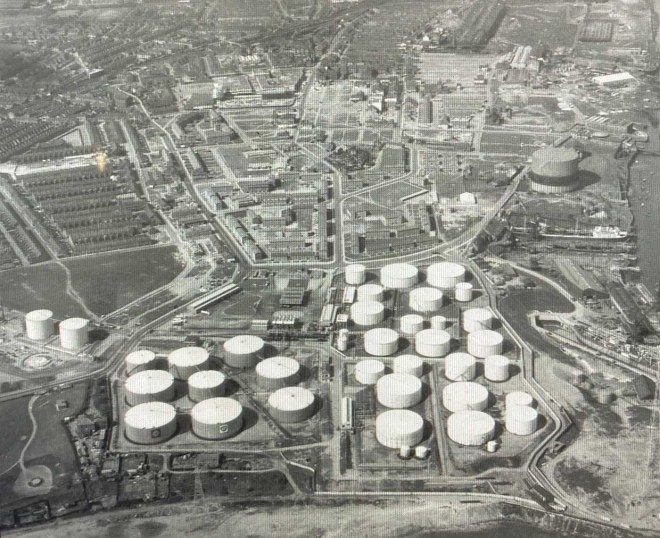 But if you look down to the little river Don which borders the Jarrow monastery’s land, you must be seeing pretty much what Bede would have seen some thirteen hundred years ago.

Both these saints were extraordinary – after all they clearly made a powerful impression on their very different Anglo-Saxon worlds.

In many ways, it’s Bede who speaks to me more clearly over the centuries. It’s not just that the buildings he knew so well still remain – it’s the books, the writings. We take literacy so granted nowadays, but it was very unusual in Anglo-Saxon times. And to embark on such a major project as his “History of the English Church and People” from scratch, so to speak, – well, hats off to you, Bede!

But aren’t they two sides of the human coin? Bede the cerebral one, and Ninian the saint of contemplative mysticism? I have no doubt I’m simplifying them here. Ah, but what it is to stretch back the imagination over the centuries!

What I can say without any doubt is that in both places these saints were much loved by their modern curators, church wardens and tour guides.